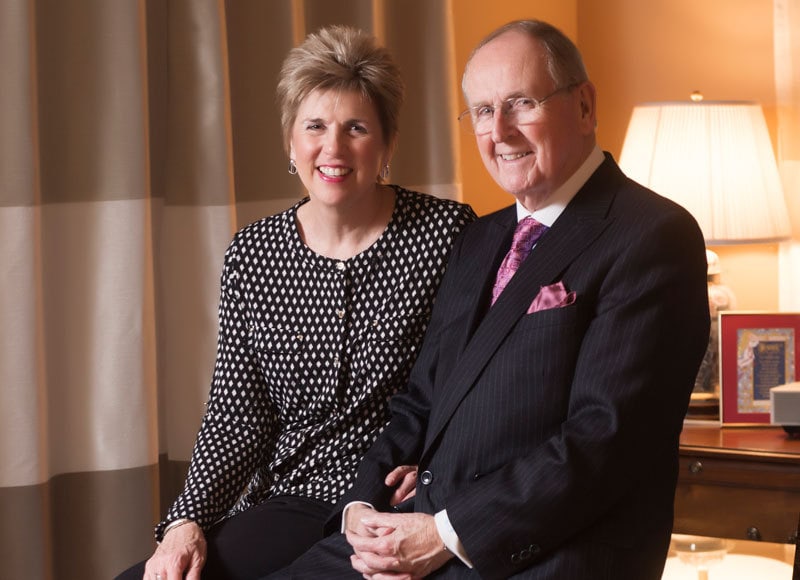 According to the Washington Post, about 10,000 Baby Boomers retire every day—that’s nearly four million people a year.

After planning and investing and saving for most of their lives, they are looking forward to the time when they can finally kick back and enjoy the fruit of their lifetime of hard work. Most can hardly wait to pack up and head somewhere for endless rounds of golf, or perhaps, split their time between the beach and the grandkids.

But, you won’t find Bill and Debbie Penkethman on that roster.

Their time is divided between paradoxical passions: helping indigenous people in the mountains of Guatemala (people whose salaries average $8 a day) and providing custom clothing for businessmen who are comfortable spending a thousand dollars or more for one of Penkethman’s Suit Yourself suits.

Bill and Debbie Penkethman have created a bridge that allows them to move effortlessly back and forth between the two worlds.

Twenty-five years ago at age 55, Bill began to ponder how retirement might look for the two of them after spending decades in the women’s retail clothing business and selling band uniforms to school systems.

He sat down and sketched out what he calls the “Ben Franklin T” to plot out his future with his likes and dislikes.

Prominent on the “like” side was selling men’s clothing and staying in Columbia was a must. On the “don’t like” side: having to deal with inventory, store hours, receivables, employees or holiday work schedules. He knew that having so many deal breakers made most job opportunities in retail clothing off limits for him.

“I realized that I’m probably the only guy who would hire me and that’s how we started our business Suit Yourself – Men’s Custom Clothing. If I didn’t have to have store hours, and if I sold custom,” he reasons, “I wouldn’t have to have inventory.” And if he set up appointments in his clients’ offices, he wouldn’t need a store.

To compile their first list of potential clients, the Penkethmans joined the Columbia Chamber of Commerce and picked out 400 people who they thought were most likely to wear suits to work everyday.

They assumed that Columbia would be a prime location for a custom suit business because of its well-established medical community with lots of hospitals and doctors who wore suits every day, or so they thought.

They were astonished, however, that they only got only a handful of responses from that initial 400-piece mailing.

“We had eight people contact us,” Debbie recalls. “That’s exactly two percent, so we followed up by cold-calling the rest of the people on that list.”

For Debbie, the cold calling was a daunting task. “After all, our name is off: ‘Pen-keth-man!” she said.

Their first sales, however, were to two very high-profile people whose names were well known all over town.

“The first guy I sold to was a surgeon. I had all my fabric swatches out and he said, ‘That one’s nice and that one’s nice … I’ll take those three.” Bill was elated.

Those first two clients were satisfied customers who readily referred others to Suit Yourself. But the advent of casual Fridays, which caused a downturn in the suit business, quickly tempered their excitement.

Eventually business professionals in not only Columbia but also in Kansas City, St. Louis and the Lake area were among the names on their client list.

Bill jokingly says that other retailers have customers …“But we have clients.”

Suit Yourself clients include company owners, financial planners, lobbyists, doctors and insurance salesmen. “They like clothing and appreciate the add-on service because I go to them and they don’t have to do anything. They are usually just very busy people. If a man charges $150 an hour for his time,” he explains, “he doesn’t want to spend three hours shopping for a suit, and then have to go back and get it altered.”

Bill shows up at a client’s home or office armed with a tape measure and fabric swatches for an initial interview.

“I take photographs and 33—35 measurements; we make a pattern for them and then make a suit from that pattern.”

The finished suit is 100-percent custom fit and custom fashion. It arrives about six weeks later from one of the many tailors with whom they contract across the nation, each one bearing Suit Yourself signature details that distinguish what they sell from suits purchased off the rack.

The client’s first and last name are embroidered on the front lining and each jacket has “surgeon’s cuffs,” or functioning buttonholes which always signals custom made.

Bill is the face of Suit Yourself, but it’s Debbie’s voice that customers, tailors and vendors first hear. She communicates with clients and the many fabric vendors and tailors located in just about every region of the country.

Kristine Trager first met Bill Penkethman at a Custom Tailors and Designers Association meeting 20 years ago. She remembers sitting behind Bill at a fashion show when his suit caught her eye.

“I noticed, primarily, the cuffs, collar and the lapel — the way it framed his face and sat on his shoulders,” she recalls. “Quite impressive … classically elegant.”

The Penkethmans have been purchasing fine English woolens and Irish linens from her company ever since.

Debbie calls in the orders and confirms availability of fabrics, and from time-to-time Bill needs to consult with her on how to find just the right fabric for one of his especially “particular” clients. “And he manages to find something for him every time,” Trager boasts.

John Rentschler, a Northwestern Mutual Wealth Management advisor, says his suits are like uniforms and remembers the very first time he ordered a suit from Penkethman more than 20 years ago.

“I had others in my closet, but I always wanted to wear the one Bill had made and I thought, ‘If I keep wearing this suit, it’s going to wear out,’ but it never did,” he says. “Bill is a purveyor of style, delivering a really clean, classic business look.” And people notice. At a recent wedding someone commented to Rentschler, “I love that coat. Where’d you get a coat like that?”

During early stages of retirement, a lot of wives get what’s been coined “Retired Husband Syndrome” a psychosomatic, stress-related illness that was first documented in Japan’s older female population. It’s an actual medical diagnosis with symptoms that include fatigue, depression and sleeplessness.

Researchers surmise that once the structure of work is gone, whatever is wrong or weak in the marriage surfaces. Many retirees are reluctant to admit that 24-hours-a-day together is simply too much togetherness.

But for Bill and Debbie, there’s no such thing as too much togetherness.

In fact, when you hear them talk about each other, they could be mistaken for a couple of high school sweethearts who can hardly stand to be apart. They literally spend 24-7 together in their home-based business. What puts unbearable strain on some marriages seems to be the glue that holds these two together.

“I don’t use a computer,” Bill says, “so she does all that … she’s up to her ears in Suit Yourself business.”

Usually Debbie’s day begins before the break of day in her breakfast room where she schedules appointments and checks on orders from vendors.

In addition to running his suit business, Bill is also on staff with Navigators, a Christian ministry organization.

There are always administrative tasks with that position, as well as typing out lessons for the dozens of men’s groups he oversees for The Crossing church. Annually, he helps host a leadership conference for Aselsi Ministry, a non-profit organization in Guatemala that provides leadership training for Mayan pastors.

Aslelsi founder, John Harvey, says Penkethman’s relational style, hands-on, 3-D method of teaching uses lots of illustrations and charts, which is a perfect fit for the people they serve.

“The educational level of this new generation [of Guatemalan pastors] is junior high,” Harvey explains.

When Bill Penkethman and his ministry partner, Chuck Worstell, first began going into the mountains in Chichicastenango, most pastors had the equivalent of a third-grade education and only understood letters and some words in Spanish or their native tongue, Quichua.

When Penkethman and Worstell first presented their idea of bringing their discipleship program to Aselsi to expand their professor-classroom model to include a more hands-on methods of teaching, Harvey was immediately interested.

“Their idea was to actually get more involved and actually have a hands-on local leadership to provide opportunities for people to not only gather to study and pray but also to actually do God’s work.”

Harvey saw it as a “perfect hand-in-glove situation” because the Mayans, who didn’t have the benefit of a basic education could more readily grasp what they were teaching.

For their first discipleship class, 10 people signed up, but according to Harvey, they ended up with only five actually showing up, with only one pastor really embracing the leadership concepts they taught. But that one pastor took what he learned from village to village in Guatemala, and also to Ecuador and Mexico, so they now hear reports of changed lives and changed churches all these countries. Harvey recently heard of plans to expand to Venezuela.

One of the unintended consequences of their discipleship program, however, is “jealousy among the women,” Harvey explains. “They ask, ‘How come the men are the only ones who get to meet?’”

Initially, they didn’t have plans to reach out to women, but now women all over the country are learning to read. “That was more by accident than on purpose,” Harvey says.

It’s hard to believe that a man who has spent most of his life selling pricey suits to businessmen could so easily make himself at home with modest Guatemalans.

When Debbie accompanies her husband on mission trips, she mostly helps out in the medical clinic.

“Bill goes into these humble villages with adobe huts and dirt floors where there is maybe one light bulb and he does a wonderful job!”  Harvey adds. “He dresses down when he’s down here, but he still looks dapper!”

“You’re not going to find Bill Penkethman under the hood of a car changing the oil or in the kitchen catering a meal or doing the dishes,” Harvey explains. He’s taken what he has and brought it to bear down here. He doesn’t think in economic or cultural terms. He looks through the lens of ‘how can I help them develop as Christians?’ and that transcends all cultural and economic levels.”

If you ask Bill and Debbie if they ever plan to really retire, they’ll give a resounding “Never!” They plan to continue selling custom suits to support their passion for serving the poor.

How to Choose a Physical Therapist

Ready for a Road Trip