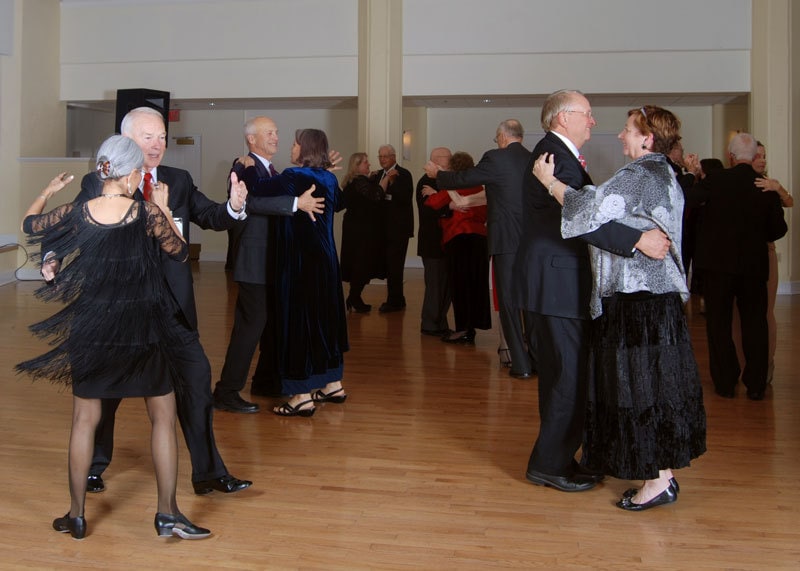 Columbia’s long history has many unique and long-standing traditions, but would you believe ballroom dancing is one of them?

In the fall of 1936, three University of Missouri faculty wives (Novella Calvin, Margery McKinney and Ruth Bennitt) decided to start an organization of young couples interested in dancing.

On Dec. 8, 1936, The Dance Group held its first dance with 24 couples enjoying great music and a time of fun.

That original dance cost $24.13 with the band charging $5. The dance was such a success that three more dances were held the next year.

Gus Reid was the first president for the 1937-‘38 dance season. The dues were $5 per couple. Most of the original dances were held at the Old Episcopal church’s student center but some were held at the Bain apple shed, Sinclair Pennant and Lela Rainey Wood Hall.

The evening began with everyone bringing a covered dish. At those first dances there were many mixer moments as the couples played musical chairs and danced with new partners to get to know each other.

The spring dance would typically be at someone’s home. One of the fun ideas was to have a theme party. The Dietrich’s “Gay ‘90s” bash was one of the big hits. Of course, one of the couples thought it was a “gay nighties” party and showed up in their pajamas. Hmmm!

When World War II started, 12 of the couples left for war service. The “War Widows” remaining in town were invited to attend unaccompanied. There was a great moment in 1946 when the Columbia war group was demobilized and all came to a winter dance. Even World War II wouldn’t stop this group from dancing.

Over the years, the original dances turned more to “record dances” due to cost, with only two dances a year using an orchestra. However, starting in the 1950s and ‘60s, the dances once again had orchestras at every dance. Club records show some of the exciting bands hired starting in the ‘70s were the Northrup Rhythm Makers, Johnny Howard Combo, Dixie Dukes, Rhythm Kings, Country Nites, Night Train and RC Homes.  Today’s bands include Kapital Kicks, Swinging Axes and Norm Ruebling.

The locations of the dances were also unique in that they were held all over Columbia — the Tiger Hotel, MU Alumni Center, VFW Hall, Columbia Inn, Best Western, Columbia Country Club and the list goes on and on.

Today the dances are held at Lela Rainey Woods Hall Kimball Ballroom and the Country Club of Missouri.

The theme dances in the early days could get a little on the strange side.

In 1953, there was a “Veiled Profit” ball in honor of the new members. Around the hall were signs like “Love Thy Neighbor” and “Beware of Pickpockets”. One annual theme was “Around The World in Eight Dances,” where each dance had a style devoted to a particular country.

There were no by-laws or other guidelines. The club always has been run by volunteer officers; it’s a testament to the club through the years that it has been a great group that has enjoyed fun, food, fellowship and dancing.

If you are interested in receiving additional information on The Dance Group, please contact Tim Vicente at timmyv@earthlink.net or (314)422-8029.