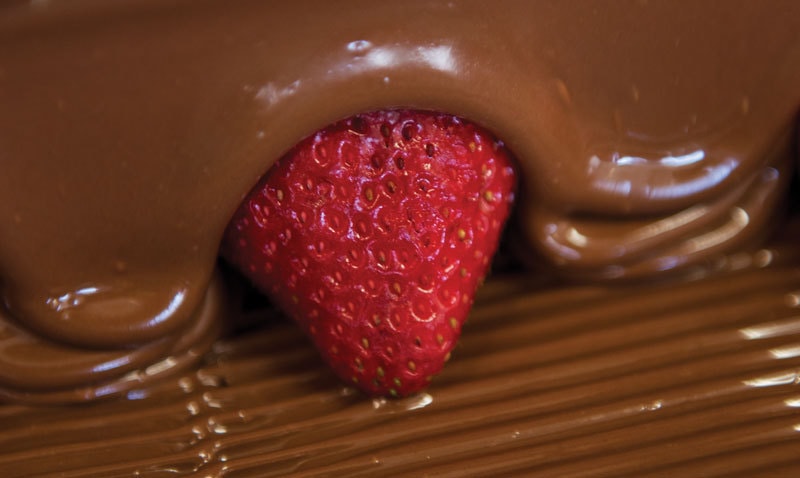 A stroll to the corner of Seventh Street and Cherry is a yearly pre-Valentine’s Day ritual for many Columbians, determined to get their loved ones chocolate-covered strawberries. The tradition continues this month, and is one of those seasonal pilgrimages that help define our community. What follows is a look at the family that has kept us coming back for those sweets for our sweeties for over 40 years.

Sam and Donna Atkinson have been tending Columbia’s sweet tooth not only on Valentine’s Day, but year-round, and it’s hard to separate them from The Candy Factory as most of their lives have revolved around building the business and raising a family in it. Friends and family converge on the sweets shop from as far away as Texas for the annual chocolate-covered strawberry production line.

Since their children, John, Mike and Jill, were young they’ve helped, too, and by the time they went to college, Donna says, it wasn’t even a question. They came and brought friends. They understood the one simple rule: Everybody helps.

Both Sam and Donna were raised on central-Missouri farms and educated in accounting. They are quick to acknowledge that they could not have accomplished anything without the hands of others.

“We’re really thankful we’ve been blessed with good people,” Sam says, noting Marjorie Riddles, the candy maker, was with them for more than 20 years.
“And we really do have happy customers,” Donna says. “That’s huge. That is so gratifying, so helpful when you’re working so hard. No doubt about it.”

Since July 1, 2016, the Atkinsons have transitioned ownership to their son, Mike, and his wife, Amy. This allows Sam and Donna to spend time with their many grandchildren, and spend time at a second home in Naples, Fla., traveling back and forth often.

“We’re ‘snowflakes’ now,” Sam says, as opposed to snowbirds. The difference? Snowbirds go down and stay. The Atkinsons come back.

“They’re very humble, both of them are,” says Mike, who along with his wife Amy, have worked alongside his parents for the last decade. “They always wanted to focus on doing a good job and putting out a product that they were proud of, but I don’t think that they ever really think about how many people have been affected, whether it’s during the holidays or family traditions that other people start that revolve around The Candy Factory.”

For the past three decades, the Atkinsons’ life has revolved around candy, and now they are getting a much-deserved break… except in February. Come Valentine’s Day, some things don’t change. Along with friends and family, Sam and Donna will be there to help with the strawberries. It’s the rule.

Warm Up Your Winter