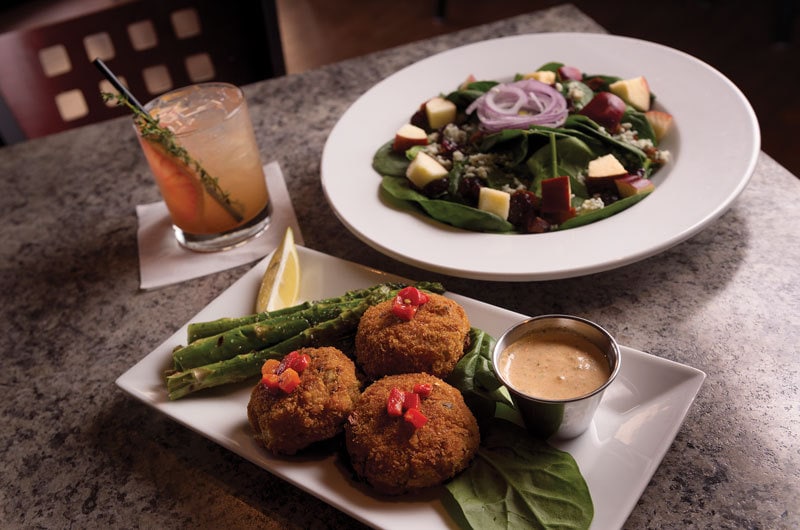 “I had always worked in restaurants when I was in school,” says Brian Coley, the owner of Coley’s American Bistro. “After my first year of college, I switched my major to hotel and restaurant management with the end goal being to one day open a restaurant.”

“One day” came sooner rather than later: Coley worked on a business plan his entire senior year, sweet talked his mother into backing him, and secured a loan.

“I graduated in May and we opened in October,” he says, still somewhat amazed. He hasn’t slowed down in the 10 years since.

The restaurant that bears his name has a comfortable, casual vibe, with a good-sized front room and a second back room that boasts a warmly inviting wooden bar. The back room also has a raised area with a door opening onto a small outdoor patio that’s very popular during warm weather.

They include a winter twist on a summer favorite: Holiday Red Sangria featuring red wine with rosemary, cranberry, fig and vanilla, topped with club soda and fresh cranberries. Another featured drink is Hysteria, made from St. Germain, juniper syrup, and tonic reduction in a floral and piney alternative to the usual hot and heavy cocktails of the season, and Fool’s Gold, a caramel vodka and house-made hot apple cider with a caramel cinnamon sugar rim that’s a customer favorite on chilly nights.

Coley says that even though he likes to mix things up, there are some staples on the food menu that never change. One of the most popular dishes is the grilled salmon salad.

“I think I’d have people after me if I take that off,” he laughs. The Cajun chicken philly sandwich and the Hoisin pork chop are also top sellers, he says. The menu always features a soup du jour, a selection of salads and sides, a variety of sandwiches and burgers, and entrees.

The eatery has seen an increase in its traffic, and is doing a steady lunch business and routinely draws a good dinner crowd. Coley attributes some of that increase to the boom in new student housing downtown.

In addition to serving lunch and dinner, Coley’s is popular during happy hour, serving appetizers and small plates such as beer cheese dip and nachos, and cocktails that include many house-made ingredients such as the apple cider and assorted syrups and shrubs. Classic cocktails and beer and wine are also offered.

The restaurant periodically has special events in the evenings as well, such as wine or tequila tastings, which Coley says have been met with a terrific reception. “We typically sell out,” he says. More events like these are in the works.

Warm Up Your Winter