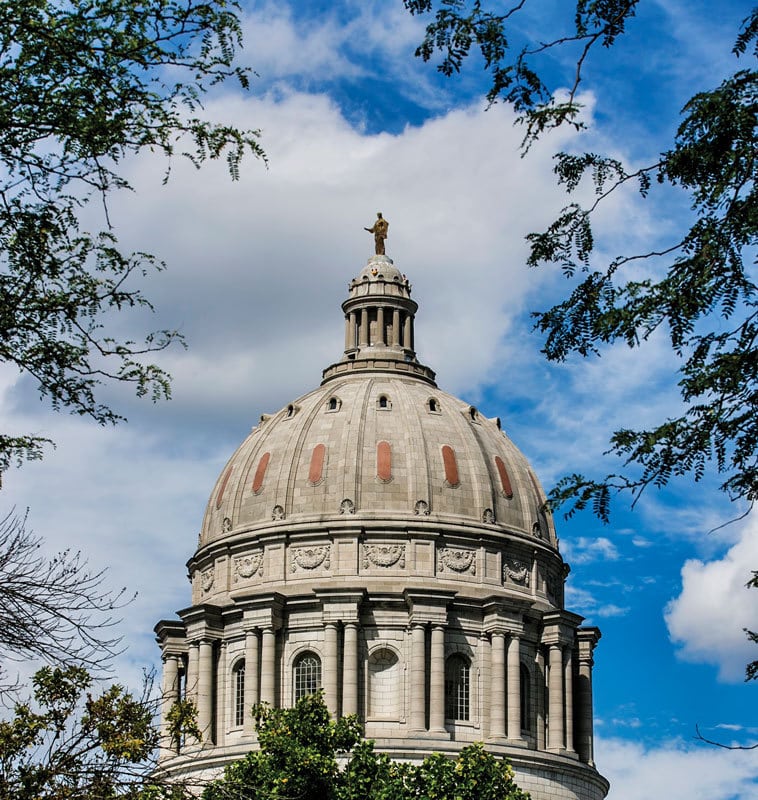 She’s an absolute knockout, the goddess perched atop the Missouri State Capitol dome. She’s been there for a hundred years. Ceres, the Roman goddess of agriculture, has watched over us through droughts and pestilence, fires and floods. But forgive her today if she peeks under the dome to see what the Hell is happening.

The legislature is back in session. And even Ceres is feeling shaky. She’s not worried about the bill that proposes harsher penalties for poaching animals, or even the bills that would legalize hemp and medical marijuana.

But she is curious about the bill that changes our laws regarding foreign ownership of agricultural land. And she’s puzzled about the need for a constitutional amendment to “assert the right of Missourians to hunt and fish.” Don’t we already have that right?

She must be scratching her head about the bill that would exempt certain farm structures from county health ordinances. She remembers the decay of Rome.

She wonders what’s behind the bill that allows companies to sue any person who implies that a perishable food product is not safe for consumption. Just to be safe, I’ve quit badmouthing my McSalad.

Not all creative legislation is bad. Much of it is grounded in purpose. For example, a very specific proposal taxes canoes and motel rooms in McDonald County to raise money for emergency services. Indeed, authorities get overwhelmed by emergencies along the legendary party rivers in that southwest Missouri county.

This true story happened a dozen years ago: It was a hot summer day. A lady took her children to play on their backyard beach beside the Elk River. Along came some chemically impaired canoeists, who floated within earshot. Loud and lascivious, they spewed particularly vile passages from their favorite classic literature, Bodily Functions of Angles and Saxons.

Their unclothed cavorting alarmed the mother. She shouted out to them. “Please watch your language! There are children on the beach.”

Her request met a chorus of carnal cuss, a semaphore circus of anatomical demonstrations. She pulled her cell phone out of her beach bag. Seeing this, one besotted actor sprung from his canoe, bolted ashore and grabbed the phone from her hand. He heaved it into the river.

Justice bore down swift and sure.

In a coincidence that may prove that there is order in the universe, a party of off-duty St. Louis police officers happened to be floating behind the attacker and they witnessed the crime. Moving with all deliberate shock and awe, the cops nailed the perp, pushing his face down in watery gravel. Local authorities arrived within minutes, and the lady’s husband, the sheriff, assessed a sobering charge of robbery.

As a result of this and other crime reports, McDonald County enacted stricter rules governing social behavior along the Elk River. This new proposal will help raise the money to prosecute.

Our goddess smiles on sensible laws.

Hemp used to be Missouri’s No. 1 export. Now growing hemp is illegal. A few years ago, a Missouri senator tried to change that ban, realizing the economic value of hemp, and the fact that it grows wild and thick along almost every ditch beside railroad tracks. “Missouri can corner the hemp market,” he reasoned, “and produce everything from clothing to tires.”

The bill almost passed, except for the efforts of a most unholy alliance. The state highway patrol testified that growing hemp would send the wrong signal to our youth, even though the ditch weed lacks the ingredient that gets people stoned. The National Organization for the Reform of Marjuana Laws (NORML) agreed with the cops. NORML testified that their members didn’t want this impotent crop cross pollinating with their potent sensimilla plants and dumbing them down.

Maybe this year lawmakers will put all that ditchweed to work for Missouri’s economy. But don’t hold your breath.

After all, it’s silly season.

Yesteryear – Looking Back at Boone County