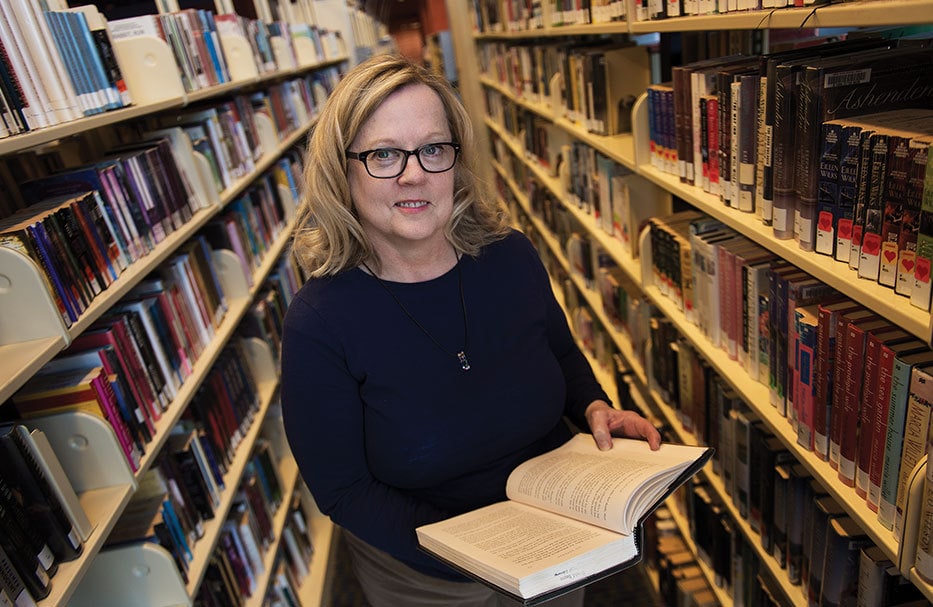 Debbie Furnell gets hired to dig — not into dirt but into the past.

Her clients might ask her to squint through the glow of a microfilm reader, scanning records for a great-grandfather’s name. Or, she’ll pour through the journal of an 1840s-era doctor, snapping a photograph of each of his 100-plus pages of writing. She could research for 10 hours or 50, depending on the job at hand. Although Furnell’s work as a genealogist isn’t always glamorous, it’s always captivating.

“It’s exciting,” Debbie says. “Like ‘can you solve another mystery?’ And, for me, I guess I’m drawn to knowing what [our ancestors] were really like. What were their lives like? How can I relate to them?”

When Debbie, 60, isn’t working her part-time position at Lutheran Family and Children’s Services of Missouri, she seizes the opportunity to navigate history.

Retiring after 34 years of work at the Missouri Department of Social Services, she is now a member of both The Genealogical Society of Boone County and Central Missouri, and the Missouri State Genealogical Association. She organizes speakers for conferences and programs while juggling clients mapping out their family trees. Sometimes it’s tedious work, she admits. But there’s something about it that keeps her coming back.

Part of it, she says, is the stories.

When she was a kid growing up in the 1960s, Debbie would explore her grandmother’s collection of handwritten family tales. She laid them out and read through the accounts, hand copying each and interviewing her grandmother like a private investigator.

What Debbie found most surprising, she says, was the emotion in these stories. Her grandmother, whom she remembers as a cheery and positive person, had written about the death of her husband, as well as the loss of Debbie’s uncle in World War II. These entries opened Debbie’s eyes to a new view of her grandmother: as a strong woman, molded by hardship, who was not immune to the pain of it all.

Debbie was hooked. Since then, she’s been tracking down her family history, even spending more than 30 years trying to figure out the name of one unknown great-great-grandfather. Using resources as old as the people themselves and more recent technologies like DNA tests, she pieces together the past, trying to breathe life into something long dead.

When genealogy newbies call her up asking for recommendations, she usually starts them with a few resources.

First, she instructs them to fill in the basics: ask your parents and your grandparents all about their families. Channel your inner Woodward and do some journalistic investigating. Then, tackle the websites — Debbie says most people try Ancestry.com, but that there are lots of other useful sites as well. She recommends FamilySearch.org, a free search service provided by her church, the Church of Jesus Christ of Latter-day Saints.

She also loves FindAGrave.com, a site in which cemetery enthusiasts and aspiring genealogists can upload or click through photographs of headstones, all available through a search engine. When websites fail, however, Debbie says you have to get into the nitty-gritty. It’s time to visit libraries and state historical societies to start sifting through records.

But dust and paper aren’t the only solutions. Genealogy is quickly adapting to technology and the new frontier is DNA testing.

“I love reading these stories because people who would never expect it, they’ll pop up someone they’ve never heard of in the first cousin range,” she says. “That’s a pretty strong clue that there’s probably a child out there that the family didn’t know about.”

So while genealogy work can be draining, there’s an emotion to it. It’s almost shocking sometimes, she says, connecting with ancestors and family members on such a level. She’s particularly shaken whenever she reads through records that stretch past the Civil War era, when slave sales were recorded in enormous ledgers.

“That sort of hit me,” she says. “When you’re reading this, these are people’s lives there. And it’s just recorded casually in a book.”

So she feels that this sort of research is necessary: to remember the past, to learn from it, to condemn it in some instances and respect it in others. It’s important to see how deeply rooted our ancestors were in their time periods, Debbie says. It makes the past feel real. It makes us critically analyze our future.

Perhaps most importantly, Debbie thinks genealogy reminds us we’re not as different from our ancestors as we might think. After all, they’re in our blood.