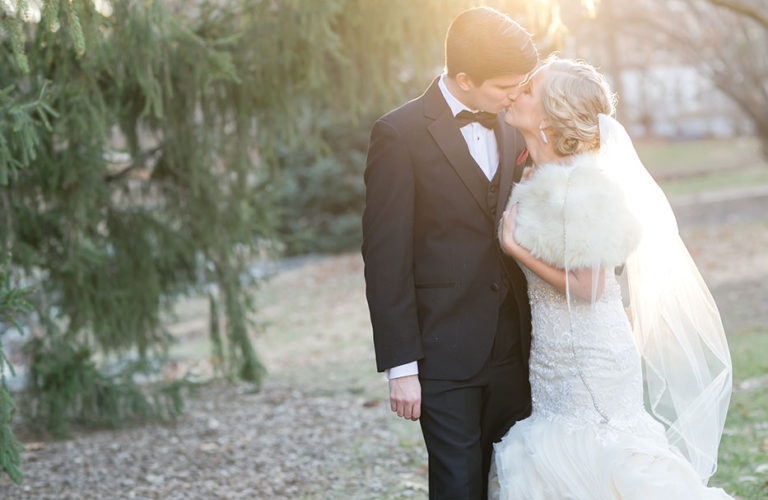 December 31, 2016 was more than just New Year’s Eve for Caroline Brumfield and Max Dornan. It was also the day they were married at The Tiger Hotel here in Columbia.

Max and Caroline met on Tinder. He was an accountant in Memphis at the time and Caroline was going to school at Ole Miss. Their first conversation, Caroline says, was how he first stole her heart. He told her how cute her dog was!

Fast forward to the proposal. The Thursday before the MU vs Mississippi State football game, Max insisted that they go. He invited one of his best friends and one of Caroline’s best friends to make the trip to Columbia, and Caroline didn’t think twice about it.

Before heading to the game, they were spending time at her parents’ home. Max had bought her dog, Camden, a new collar and as Caroline noticed him putting it on the dog, he called her over to come look at it. Sure enough the collar read, “Will you marry my daddy?”

Caroline’s gown came from local bridal boutique Belle Mariée. It was stunning with its gorgeous, unique train. Her hair was done by Kyla Parker, and her makeup by Kaylee Carter. The men were sharply dressed in tuxes from Men’s Warehouse. The beautiful flowers were done by Kent’s Floral. Aric Bremer was the evening’s entertainment while guests danced the night away in the ballroom at The Tiger. Velvet Cupcake created their beautiful cake.

“My favorite part of the day was getting to marry my best friend and getting to ring in the New Year with all of our favorite people!” Caroline said.

The happy couple headed out to Las Vegas for a mini-moon right after the wedding and are planning a trip to Mexico this summer.

Caroline and Max live in Kansas City, Missouri, where Caroline works as a teacher for KIPP: KC and Max is an accountant for Grant Thornton.