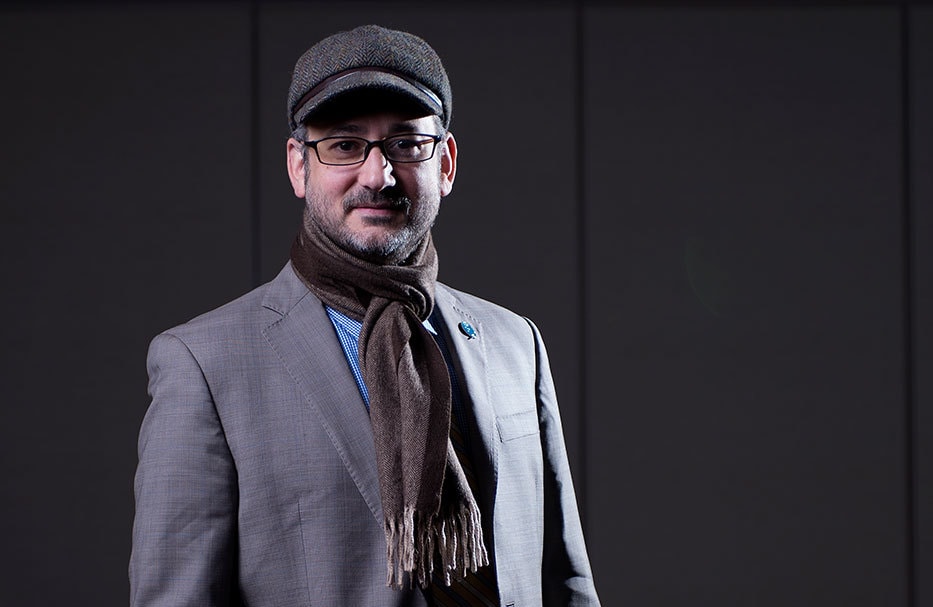 This Is My Story

Dr. Peter Stiepleman has been the Columbia Public Schools superintendent since 2014. Peter is the second generation Stiepleman in the United States. He says that sharing the story of his family often helps him connect with others.

“Superintendency really involves three jobs. One of those jobs is I’m the CEO of the third largest employer in town — behind MU and MU health, Columbia Public Schools is the next largest employer, with 2,700 employees and a $290 million budget.

“The second job of superintendent is to be the head learner, or educational leader, of our community. And my third job is as chief storyteller — some would say politician, but I like to consider that I’m not one. So, telling the organization’s story … I look for ways any time I’m in front of the community to bring story into the conversation.

“My point begins to resonate once people get to know me, where I come from, where my hope emanates.” Peter and his wife, Elizabeth, have three sons Isaac, Ezra and Jacob. “My kids are infinitely hilarious,” he says.

Peter earned his undergraduate degree in New York, and later earned his M.Ed. and Ed.D on the west coast in Oakland, California. Peter moved to Columbia from California in 2004 with his wife, Elizabeth Chang, a University of Missouri professor. His first job with the Columbia Public Schools was as a third-grade teacher at Derby Ridge. He also served as assistant principal and principal at West Boulevard, and also assistant superintendent for elementary education.

“Last year, my big goal was to give 200 presentations. Basically why it’s important to raise taxes in support of education. My personal story, that I would tell as part of that, is that my son’s coming up to his bar mitzvah … part of that ceremony is when my father would hand the Torah to me, and then I would hand it to my son. It’s called ‘L’dor va’dor,’ which literally means ‘from generation to generation.’

“My takeaway is that we have a similar responsibility to those that came before us,” Peter says. “We have an obligation to those to come.”
Peter looks forward to addressing the challenges facing Columbia Public Schools and to offer a vision for the future of the school district.

“This year’s conversation with the community is ‘Know Their Story.’ People, especially children, will do everything for you when they really know who they are,” he says.

The Story of My Family

“I am the grandson of immigrants from Odessa, Russia. My grandfather, Yacov, hailed from a small Jewish village that was tormented by the czar. Villages were continually being burned down. There’s a story to be told there. He could either get on a boat in Odessa and flee, or stay and face certain death. Those that stayed behind faced the Holocaust soon after. He risked everything for a dream of a better life,” Peter says.

“I took my boys to Istanbal, Turkey, to the mouth of the Black Sea,” Peter says. “As we stood overlooking it, I told my boys about their great grandfather Yacov, who my son Jacob is named after. He risked his life, he gave everything for us.

“When my grandfather arrived in New York, he settled in the lower east side. It was there he married my grandmother, who died giving birth to my father. My father bagged groceries and worked the night shift at the local post office so his children could have a better life.

So he risked everything for this dream, this dream of a better life … for the ideals. And he achieved it, no doubt, through hard work. His three boys (me and my brothers) have definitely had a better life.”

The Story of Isaac, my student

“My first experience teaching was in Oakland, California. I joke that I grew up in New York, but I woke up in Oakland. There’s another immigrant experience story there. I drew parallels for the community there, on why someone would risk everything. That brings me to the story of a student I had named Isaac,” he says.

“Isaac and his mother came into the United State illegally. She paid a ‘coyote’ to smuggle them across the border. They had to walk through the desert. Isaac was 4, and his younger brother was 2. They risked everything … and I mean, you are really risking your life … so that they could reunite with their father, only to have your romantic idea turn out to be an absolute nightmare. Once reunited in California, they slept in a closet with their dog, while their dad drank and gambled … These Mexican parents were doing these jobs no one wanted, removing asbestos, pouring tar … I think of Isaac every day and the luck of whose family you are born into. L’dor va’dor. That’s why we named our oldest son Isaac, so we wouldn’t forget.”

“There is a retired superintendent in the St. Louis area that I look up to. She was the one who helped me understand the role of storytelling and the importance of metaphor for being able to communicate,” Peter says, “so you can achieve clarity in your community, so that people know what you are working towards.

“Storytelling is an important part of the human experience. We connect to story,” Peter says. “Think about being in a corporate business meeting, and hearing all about data, and looking at these data charts … sure you can interpret what they mean, but boy is it more meaningful if there’s a narrative to accompany it.”

The Changing Face of Columbia

“Ninety percent of school children in Columbia attend public schools and I want Columbians to continue sending their children to public schools,” Peter says. “We are a rapidly urbanizing community. For example, 15 years ago about 25 percent of students were on free or reduced lunches. Now, we are looking at 1 in every 2. That speaks to a community that has changed significantly. Story is one way of reminding our community that we are in this together. We are a stronger community when we lift each other up.

“The vast majority of our state and legislature have an impression of Columbia as a wealthy university town. Sure we have three big industries: health care (with five hospitals); we have a large finance sector (home of Shelter Insurance, regional State Farm offices, etc.); and we have education (with three universities). So you associate it with affluence and influence.

“What they don’t see is there’s the other half that are serving those three masters.There are very few manufacturing jobs and lots of service jobs. Their benefits are weak and there is no real 401k, no 403b plans, median income is $29,000. That doesn’t speak to a high average of wealth.

“So on the surface, you see good schools and new facilities look amazing. There’s lots of investment and new growth. At the same time, there’s a growing portion that comes here and stays here for the amazing resources in Columbia. Things we take for granted … like the wait time to see a dentist or doctor is far shorter here than in Kansas City, St. Louis, Chicago or Memphis. Section 8 vouchers may be easier to use here, since housing is more affordable. We’re a safe community. We’re a resource-rich community. So our story is changing. It is changing right before our very eyes.”

Why Story Is Important

“You want people to have hope,” Peter continues. “Hope that they can do what my grandparents and the parents of the Mexican children I mentioned, and others have done … Their risks will bear fruit for those who follow.”

A Story Becomes a Community

“Today, families look different. We can’t apply one definition to family. When you are in a home with a single parent, life is a lot harder. It requires you to be creative. That’s not a judgment, it’s a reality. If you’re a single parent, you probably have a stronger reliance on community whatever that community might look like, whether it’s neighbors, grandparents, friends … it’s essential we recognize we can’t do it alone.

“‘We are One’ is a song I would sing: ‘Standing tall — proud of where we are, and where we come from.’ Growing strong. Showing love. We are one. When a child would struggle, I would call the parent in, we would all take hands. We would solve the problem together. The solutions rely on the community working together.”