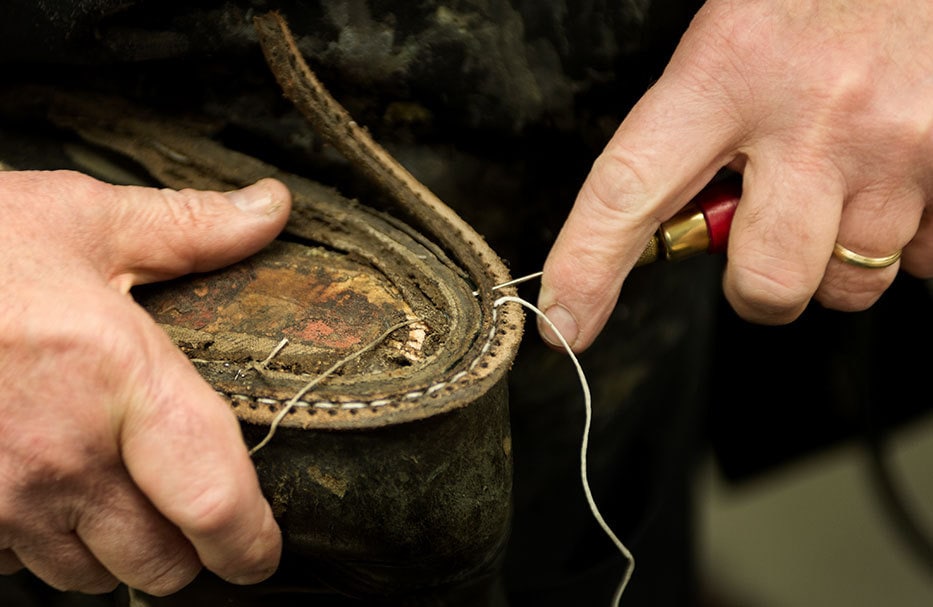 Bob Wood, owner of Dawson Shoe Repair, takes his position each morning behind the vintage wooden and glass counter at his shop at 212 S. Eighth St. If he looks out the large storefront window directly before him, he can see the University of Missouri’s Lee Hills Hall. Inside the university’s building, students learn the craft of journalism, using the latest computer technology. Inside Bob’s shop, a more ancient craft is practiced, one that isn’t based on computers or cloud networks. The tools Bob uses are from long before the digital age dawned. His favorite machine – a clunky electric shoe shiner with spinning brushes – dates back to the 1950s, long before the students in Lee Hills Hall were born.

At age 70, Bob has achieved what few people ever do. He has spent his days doing what he likes with the people who mean the most to him. He cheerfully goes to work every day and stays there every hour the store is open. Since the start of this year,

Bob’s son, Matt, age 27, can also be found in the shop, helping his father and learning from him. Matt’s daily presence in the shop marks the beginning of a transition. Bob isn’t ready to step aside, but he welcomes Matt into the business as an apprentice, son, and hopefully, the third generation of Woods to own Dawson Shoe Repair and the fourth generation to work in the craft.

Bob is old-school Columbia. His voice has an old-timer’s Boone County twang to it. It hides nothing, revealing the honest and direct personality behind it. He has the humility of someone who has spent his life serving others; he has the pride of someone who runs a successful small business that he thoroughly enjoys. Matt is the new Columbia. With his beard, calm demeanor and jeans, he looks like he could be on his way to class at the university. In a way, he is a student – a serious one – set on learning a craft that runs four generations deep.

“I’m trying to learn as much as I can from my dad. I don’t want this craft to die,” Matt says.

Business at Dawson Shoe Repair is strong and steady enough that Bob is relieved to have his son carry part of the daily load. Throughout the day an intermittent stream of people come in, bringing their shoes to the counter or picking up a pair that Bob has just finished. In addition to shoe repair, Bob has branched out to do some key duplicating, zipper work and the occasional leather repair.

Columbia has been the home of Dawson Shoe Repair since the 1930s, when Fred Dawson first opened his doors for business at 13 N. Eighth St. Despite the Depression, shoes needed repairing and the business was able to survive. But during the ‘50s, it ran into trouble.

That’s when the Wood family entered the picture. Bob’s father, Estel Wood, saw an ad in a trade publication for a shoe repairman to run a business in Columbia. The way Bob tells the story, his father left southwest Colorado, taking his wife, three young sons and three dollars with him to Columbia. “Dad was poor,” Bob says.

By then, Dawson Shoe Repair had changed hands from the original owners a couple times and was owned by L.D. Johnston. Johnston’s main interest was in running the paint company he had founded, and he was looking for someone to take care of the shoe repair shop he had recently bought.

“Dad convinced L.D. that he could turn it around from a losing proposition to a winning one,” Bob says. At the time, that was no easy task. “Columbia had 19 shoe repair shops back then. Now there is one,” Bob explains.

Between 1956 to 1964, Bob’s father ran the business as an employee proprietorship. “The harder Dad would work, the more of it he’d own,” Bob says. Finally in 1964, one day before L.D. Johnston died of a heart attack, he signed the papers giving Estel Wood sole ownership of Dawson Shoe Repair.

Bob’s personality and life were shaped among the smells of shoe polish and leather. He started working at the business at age 9, when his father would pay him 50 cents a week to sweep the shop. He immediately took a liking to his work. It was a chance to be near his father and his grandfather – another shoe repairman – who occasionally helped out in the business.

“I idolized my dad and my grandpa. I was like a shadow, everywhere they went I would hang on with them. That’s how I learned to fix shoes,” Bob says.

By the mid-sixties, Bob knew he wanted to be a shoe repairman. “My grandfather passed away in 1964, and the more I watched my dad, the more I realized he needed help. So I started doing things like putting heels on,” he says.

Listening to Bob explain the history of Dawson Shoe Repair, it is obvious that there is no separation of business, craft and love of his family. Everything flows together – his heart, his hands, his family, his pride in serving the community. In 1990, Bob took ownership of the business from his father, who was ready to slow down.

“He never really retired, and he would come in half days. He’s like me,” Bob says, “If I were to retire, I’d never totally retire. I’d be in here doing something.”

In 2009, Bob lost his father and seriously considered closing the business. “When he passed away, I thought the world had come to a stop,” he says. But after three weeks of grieving, he re-opened the business.

“Dad didn’t open the shop so I could feel sorry for myself. I opened it back up to serve you, the public. I said ‘Hey, this is exactly what I want to do,’ and I’ve never looked back.”

In the academic world, just a few blocks away, future entrepreneurs study business theories, marketing plans and case studies to determine the best way to grow a business. Bob has a simple explanation for Dawson Shoe Repair’s more than 50-year run of success. His said his strategy is based on an age-old principle: “Follow the Golden Rule – Do unto others as you would have them do unto you.”

Before Matt started full-time this year, Bob ran the day-to-day operation of the shop by himself. That meant answering the phone, helping customers at the counter, repairing shoes and boots, shining them, keeping the equipment running and making sure he had the supplies and inventory he needed. He had tried overseeing employees in the past, but it wasn’t the same. “They just didn’t have the family-do attitude,” Bob says.

He doesn’t need to explain what his term “family-do attitude” means. He’s spent most of his life learning how to treat customers from his father and grandfather, and can remember his father coming home from work at the end of a day with a barrel full of shoes that he’d work on at night. If something needs to be done, it happens. If he promises a customer a pair of shoes by Thursday, those shoes will be ready then.

In addition to his dedication to customers, Bob is motivated by the sheer pleasure he finds in repairing shoes and running a business. When he picks up a pair of shoes, he sees beyond the leather. For Bob, who has handled thousands and thousands of shoes, each one is different because each one belongs to a different person. By repairing the shoe, he is helping the person who owns it.

“I love doing what I do, and I don’t get bored working on shoes,” he says. “My favorite part of the business is trying to take a shoe from its worn-out or broken state and bringing it back to a satisfactory state that the customer is happy with.”
Bob’s wife, Mary Ann, plays a supporting role in the business. Although she works at the Harry S Truman Memorial Veterans’ Hospital, she finds time in the evenings to take care of the business’s accounting from home. She remembers the days when Bob helped his father, and now she sees a role reversal with her son now helping Bob. She understands what the business means to her husband.

“If you watch him, you see that he enjoys people – talking and working with them. And he enjoys the actual work of repairing shoes. There’s not a part of the business he doesn’t like,” she says.

Matt has a realistic outlook, recognizing that he is part of an industry with an uncertain future. “I’d love to be able to do this until I’m my dad’s age,” he says, “But I’m not naïve enough to think that this is something that is guaranteed to continue. It’s something of a dying art.”

Dawson Shoe Repair depends on shoe manufacturers creating quality shoes and boots that are worth repairing and people choosing those more expensive shoes over low-priced toss-aways. One positive trend Matt sees in Columbia is that as students get closer to graduation, they are more likely to spend money on good shoes for job interviews. And those shoes need repairing and an occasional shine. For now, there’s more than enough business to keep Matt and his father busy eight hours a day and more.

As they weather the changing trends in shoe styles, Matt and his father keep their priorities in perspective. “I love the fact that my son is working with me,” Bob says. “Like my dad loved having his son work with him. I love the thought of four generations of our family – Matt, me, Estel Wood and Grandpa, Forrest Henry Wood.”

Can this father and son keep the family tradition alive for another generation? If so, it will be because of their “family-do” attitude toward customers and their family ties to each other. “I respect my father for the man that he is and because he’s my father,” Matt says. “Working for my father and with my father, and keeping a business going that my father and grandfather owned – it’s a huge source of pride.”