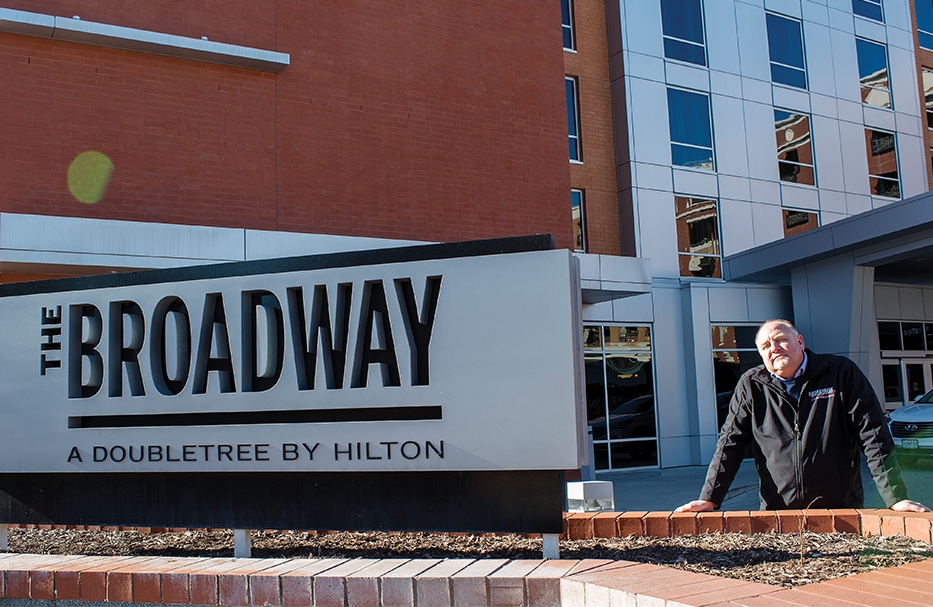 The Broadway Hotel opened for business in 2014, giving visitors a boutique hotel in the heart of downtown Columbia. The hotel also offered Columbia residents an eighth floor Rooftop Bar and meeting space with one of the best views downtown offers.

David Parmley, owner of Chesterfield Hotels, Inc., which includes The Broadway hotel, explains the expansion plans for the hotel, adding a tower and enclosed walkways between the two buildings.

Give us a short overview of the proposed expansion project.
We are looking to construct a new seven-story hotel tower at 1034 E. Walnut. This parcel is located due north of our existing hotel and is just west of the Short Street garage. We have the land under contact and hope to close on it by year end.

The original hotel we built was about 98,000 square feet and the new tower would be about 25% smaller with approximately 73,000 square feet. The ground floor would include a reception lobby entered off of Walnut Street, two new meeting rooms, a boardroom, and ancillary support areas and offices for our banquet staff. We would also be adding an additional 80 guest rooms and suites on the second through sixth floors.

The hallmark of the project will be the large ballroom and reception area with expansive windows providing panoramic views of downtown Columbia from the top floor of the
new tower.

Explain the need for a conference center space and the proposed size.
Currently The Broadway hotel only has around 3,000 square feet of meeting space, which is much less than many comparable hotels. Our largest meeting room will accommodate around 150 with banquet style seating. This has limited our ability to host many larger out-of-town meetings and events that would like to stay in downtown Columbia.
Our existing spaces have been very popular venues for corporate and association meetings and an ideal place for hosting social events. Both meeting planners and attendees alike enjoy traveling to interesting destinations like downtown Columbia.

We think there is a real untapped demand from meeting planners who would like to hold their events here but who are unable to find suitable meeting space.

Tell us about the tower connecting the two hotels.
The new tower would be connected to the existing hotel via enclosed walkways at the fourth and seventh floors. These walkways would span about 20 feet across the alleyway that separates the two towers. Having the seventh floor walkway will also allow guests to pass between both our new ballroom directly over to The Roof venue at our existing hotel.

How has The Broadway hotel done since its opening three years ago?
When developing The Broadway hotel, one of our main goals was to create an upscale hotel that would serve as the gateway to downtown Columbia, act as an anchor for the North Village Arts District and would be a catalyst for future development in the area. I think we have accomplished those goals and created a hotel that our city can take pride in. Our property has been well received by travelers who appreciate our hotel’s vibrant boutique design and convenient location, providing them with easy access to explore all of the unique shopping, dining, entertainment and nightlife that The District has to offer. In addition, The Broadway, a Doubletree by Hilton hotel, was recognized by Hilton Hotels and received their worldwide award for “Best New Doubletree Development in 2014.”
Tell us about the need for a TIF (Tax Increment Financing) for this project. How will it help your expansion efforts?
In planning and budgeting for the new tower, we are discovering large cost increases for land, general construction and furnishings for our proposed project as compared to just five years ago. Currently all of the construction trades are extremely busy and are bidding any new jobs accordingly. We estimate that the new tower will cost more than $20,000,000 to develop.

That price represents a 38% increase per square feet in development costs as compared to the expenses we incurred constructing the existing hotel. These increased costs make the economic feasibility of building the new tower prohibitively high. Without TIF, redeveloping of the old Regency hotel site into what is now, The Broadway hotel, would not have been possible. The costs associated with redeveloping the new site are even more prohibitively high, which makes TIF an absolutely essential component for moving forward. Without TIF, the new tower project is not a possibility.

We appreciate the past community support that helped make The Broadway hotel a reality. With this new project we hope that the city will continue to place their trust and confidence in our vision and plans for a growing downtown Columbia.
How do you see the lodging/hotel business in Columbia?
Overall I think Columbia hotels are doing well. Weekends are especially busy due to the numerous special events that Columbia hosts. Sunday through Thursday nights generally lag the weekend occupancy and those nights continue to be the focus of the Columbia Convention and Visitors Bureau as they continually work to attract more conferences and meetings to Columbia during the weekdays. Leading industry expert Smith Travel Research (STR) compiles a monthly report that compares the overall Columbia hotel market to other cities and benchmarks important indications such as City-wide occupancy, Average Daily Rate (ADR) and Revenue Per Available Room (REVPAR). In comparing the years of 2016 vs. 2015, Columbia showed growth in all three indicators with a 4.4% increase in occupancy, 1.8% growth in ADR and 6.3% increase in Revenues Per Available Room.