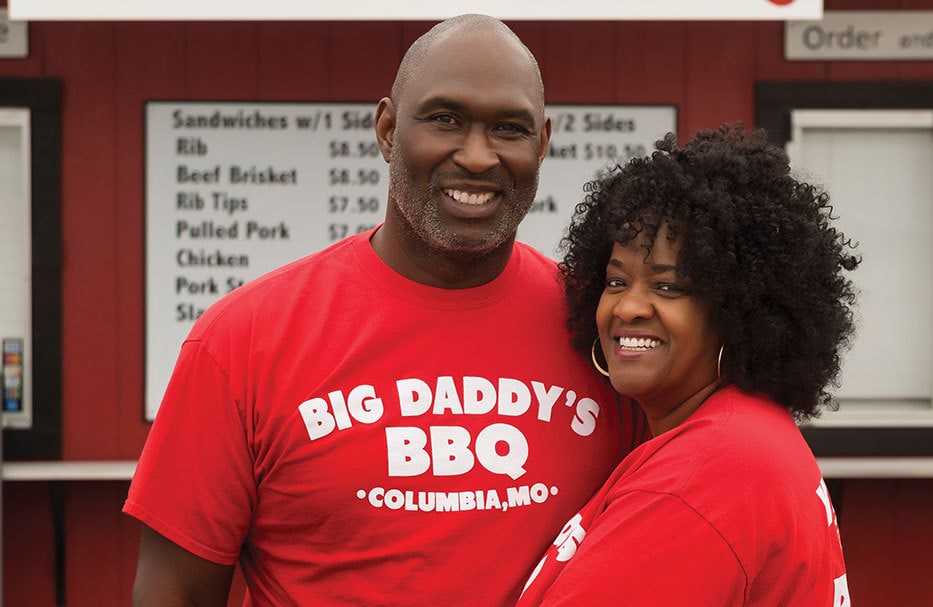 Big Daddy’s BBQ, at 1205 N. Garth, is already several weeks into its third season. The eatery opened for 2017 on March 15, with spring hours from 11 a.m. to 7 p.m. Wednesday through Saturday. Once the days start to last longer and summer hits, the hours will extend until 8 p.m.

Owner Lloyd Henry says he and his wife, Fontella, are thinking of adding Tuesdays to the schedule, too. That would allow the restaurant, which has about a 30-seat outdoor seating capacity, to serve more guests.

Before opening the “brick and mortar” spot in 2015, Big Daddy’s operated for two years out of a food trailer. It played a big part in the business’s success, and according to Lloyd, it will continue to do so.

“We still use the food trailer for a lot of events,” he says. “We do Roots N Blues, do a lot of carnivals, small venue things. We do caterings with it. We’re going to take it out a lot more this year. The University experimented with food trucks last fall at Speaker’s Circle, and we were included and it was quite a success.We’ll have the trailer there on certain Fridays.”

You’ll also be able to check Facebook and find out when the trailer will be at the corner of Ash and Stadium, where a Break Time station used to be, since Lloyd has an agreement to set up there. He hopes to maximize the high traffic location and introduce more Columbians to popular favorites such as brisket and pulled pork nachos.

Adding Tuesday hours and ramping up food trailer outings are just some of the changes in the works for Big Daddy’s. Lloyd says he and Fontella are thinking of getting a liquor license, mainly for beer. He also says they plan to expand their offerings to include macaroni ’n cheese, sweet potatoes, neck bones, fried chicken and sweet potato pie. They may also begin serving their fried fish every day, instead of just on Fridays and Saturdays, and begin regularly offering some items as reduced-price specials.

Fontella, who runs Big Daddy’s on a day-to-day basis, has barbecue in her blood. Her family was in the barbecue business in St. Louis for decades, where they owned and operated several successful C&K Restaurants. “That’s where the interest in barbecue came from,” Lloyd says. “The whole interest and the know-how and that kind of thing were her side.”

But Lloyd certainly isn’t without his contributions.

“I actually came up with the sauce,” he says. “It’s a Kansas City-style sauce that’s sweet with a little bite on the end. It’s ketchup-based, with some vinegar, a little smoke in it and other ingredients.”

Lloyd can frequently be found mixing up his sauce (which he plans to begin bottling) and helping out at the restaurant when he’s not working as a State Farm agent.

All the recipes at Big Daddy’s are recipes that either Fontella or Lloyd grew up with — recipes for down home, southern-style soul food. Lloyd says that although there are quite a few barbecue places in Columbia, each one is unique.

“Our difference is really in how we season,” he says, “when it hits the tongue and makes it dance, it’s like going out to the disco.”
Lloyd says that once they’ve prepared the meats, they “spice ’em up,” essentially applying a dry rub. Then it’s into the smokers.

“We smoke the oldest way known to man, smokers with wood and charcoal,” he says.