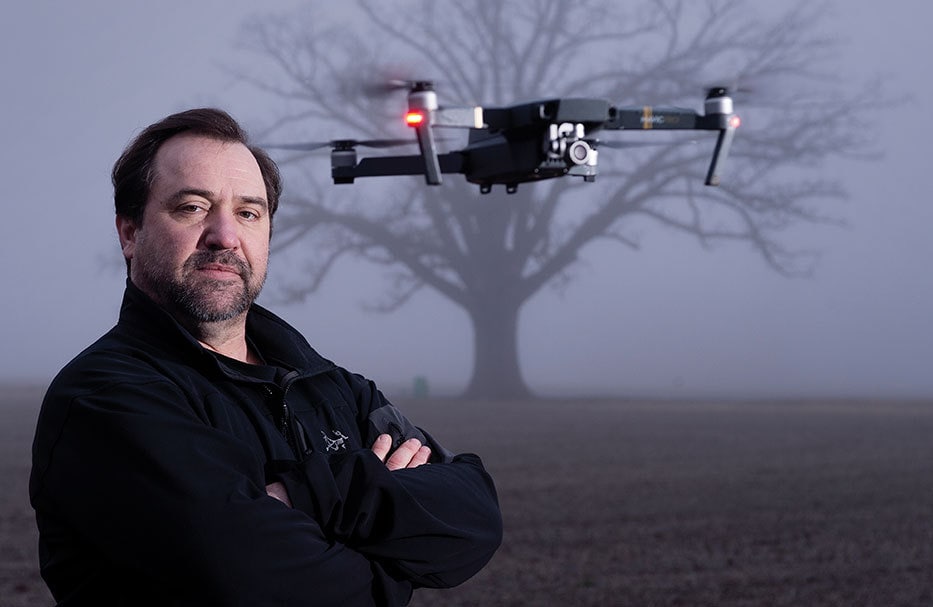 Two Years of the Wild Skies

My first introduction to drone technology was in a park in China. I watched a four-bladed helicopter sitting completely still in the air as its operator placed the remote on the ground. Having flown a number of RC planes and helicopters, I was amazed at the apparent autonomous control that allowed this aircraft to stay aloft without constant human piloting.

I was speechless when I opened the box containing my first drone — a gift from my muse, Marla. I stared at the thing for two days as it sat on my painting table. Neither of us could have possibly predicted the adventures this new toy would lead us on.

I took my new flying camera down to the giant bur oak tree in the Missouri River bottoms near McBaine and learned to fly in the isolated fields of a snowy January. My first flight was a bit bumpy, but was without incident. I flew for 25 minutes, filming the grand tree from previously unimaginable angles. I was hooked after a flawless landing, loaded the second battery and launched on my second flight… straight into the branches of the great bur oak!

I managed to wiggle it out of the tree by gunning the broken propellers and almost caught it before it hit the ground. Thankfully, the damage was limited to the props, but replacements were not yet available in the United States. It took three weeks before the first set of replacement props would arrive from China, and I was chomping at the bit to fly again.

I would launch that first drone dozens of times every single day for the first year, receiving a shot of adrenaline each time. This aerial addiction offered new views of favorite old places and a freedom to fly like a bird. The initial photos I was taking were amazing and inspired new visions in my paintings. I dropped everything to pursue as much of it as I could get.

My first art collector and longtime friend, Mary Bumgarner, took great delight in my new passion and encouraged me to do more. She was sick and could no longer travel, and she asked if I could take a few aerial photos for her. First, she wanted an overview of her house, then a list of places around Columbia. Then she wanted to see what was on top of Devil’s Tower, the flat-topped mountain that aliens landed on in the movie “Close Encounters.” It was spring break, so I loaded my muse and daughter, Caroline, in the van and we roadtripped west to fulfill Mary’s request.

I stood in the empty parking lot in a light snow, hands shaking as I launched ‘BabyBird 1’ into the air. The climb seemed to take forever and I began to worry about the cold depleting my batteries before it could return to the ground. As I passed the plateau at the top, I quickly had an answer for Mary. It was March and there was snow on top of Devil’s Tower.

I couldn’t find much information online about drones back then, much less any information about laws regulating them. I was an early adopter and realized the sky was the limit, so to say… at least for a minute, until rules and regulation could catch up. I asked permission where possible but got better results begging forgiveness when necessary.

Anticipating that lots of places would eventually become off-limits to drones, I began photographing the most amazing sites that I could find, with special emphasis on national parks and other places that would offer the most spectacular visuals. I had no intention to infringe upon anyone else’s enjoyment of places, harass wildlife or be an unnecessary hazard or nuisance, and found that sunrise offered not only the best light but the least company.

I had very little interaction with other people on my early morning flights but did my best to share, educate, and inform any curious early-risers. Almost everyone’s initial reaction was positive amazement. Even still, I felt like the national parks should be off-limits to drones and the weedeater-like noise they make. The parks are a place for communing with nature and should remain as free of man-made distractions as possible.

On May 14, 2014, the National Park Service banned drones in the parks. I was surprised that they acted as quickly as they did, but I supported the move and was happy to have flown over a few ahead of the curve.

Restrictions from the FAA were slow to follow but eventually set limits on what we could do, bringing a close to the wild skies in the United States, and sparking an international adventure to fly over whatever amazing things were still unregulated.

As the rest of the world caught onto the drone addiction, my friend Mary reminded me that I am at heart, a painter, so I came home to my studio to unleash the inspiration I absorbed. Much of my recent work was inspired by my bird’s eye view of the world below.