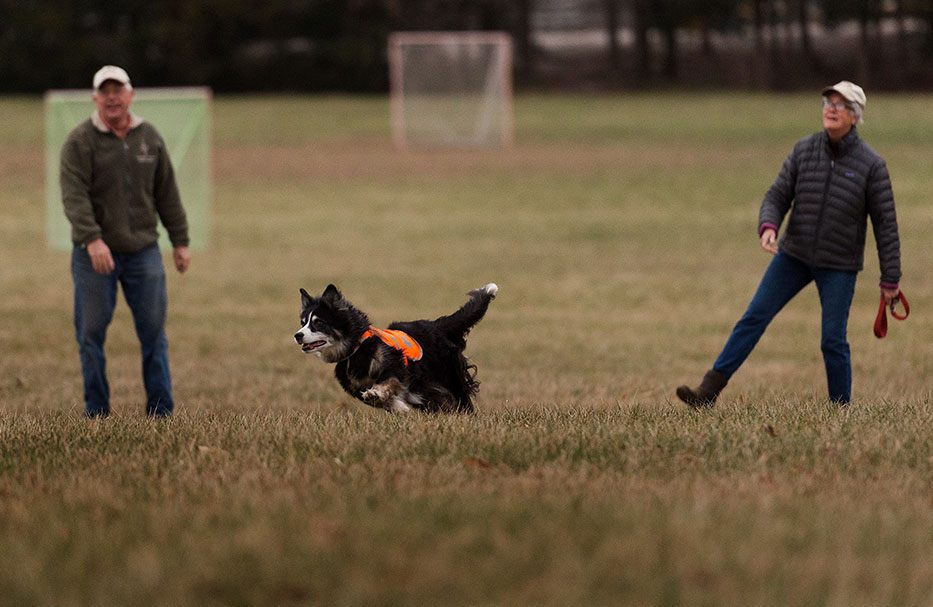 Dulce
I’m a working dog, born and bred. My mom was a border collie who fell on hard times. A kind woman adopted her and a month later was rewarded with ten pups, including me. My dad? Well, he was never in the picture, but some speculate he was an Aussie, another working breed.

My line is geese — wild Canadian geese — the kind that poop on your beaches, lawns, golf courses and sidewalks. I don’t have anything against them personally, mind you. I’d never hurt one. But I really, really like to chase them.

It’s like this: you know how you feel when you’re giving 110 percent of yourself? You’re all muscle, all power. The wind is in your fur, your legs are pumping. You’re running fast and low. The geese are ahead and honking their silly heads off. Sometimes I imagine them saying, in Canadian, “Loups! Loups! Loups!” Ha! They think we’re wolves! They run a few yards, flap their wings and then they’re airborne. Belle and I circle around, adrenaline pumping, job well done.

I’ve had this gig for eight years now, working for Columbia Parks and Recreation. Bet you haven’t noticed many goose problems in city parks since then, have you?

Columbia had pretty bad goose problems once. Poop all over Stephens Lake sidewalks, even the swimming beach. They had to have a goose roundup back in 2001, I’m told. Conservation folks caught more than 100 geese, humanely killed them, and gave the meat to the food pantry. But it riled people up. No one likes to see animals killed. And Canadian geese, because they migrate — some of them do, anyway — are protected by law. They had to get a special permit for the roundup. The parks people said, “Never again!”

They planted shrubs around the lake, because geese think predators can hide in them and they’ll stay away. That’s why they like golf courses so much, and mowed areas around water. But I’d be out of a job if that’s all it took to get rid of geese. I was a rookie back when they hired me in 2008, but it didn’t take me long to get the hang of being a goose dog.

I got a vest that says “Official Goose Patrol” so people understand I don’t have to be on a leash. Honestly, I think the vest is kind of silly, but whatever …
What I really, really like about my job, in addition to chasing geese, is meeting people in the park. You see, I have this thing about sticks. Love sticks. Love them. You throw my stick for me and I’ll love you back, like forever. So after I’ve chased the geese away I get to play stick, usually with kids, but I’ll play stick with anybody. I’ve made lots of friends that way. You may have seen me. Sometimes I carry four or five sticks in my mouth. That’s how I keep score with Belle.

And I hate to lose a good stick. They don’t grow on trees, you know.

Things were going along pretty good with this goose gig until I got sick. I think that was 2012 or so. It was a tick bite. Nasty creatures. Gave me a disease that made my joints swell up. Long story short, I went to an acupuncture vet who blamed the ticks and got me on medicine that cured me, sort of. I still get sore legs sometimes, especially now that I’m almost 13. So Belle entered the picture last year. She’s okay, for a pup. I’m still schooling her. I’ll let her tell her side of the story now.

Belle
Wow. It’s like … am I going to get my picture taken? Okay, awesome. Like Dulce was saying, I’m a border collie pup, just one year old and I’m like, wow, I get to chase geese? That’s so cool! So once, I was like, wow, there’s a goose and I start to run after it but Dulce gives me this LOOK and she’s like,  “Don’t be stupid, that’s a duck.” So I’m learning, thanks to Dulce and Don and Kathy.

Yeah, Don and Kathy Love, they’re our humans. They’re okay, they’re cool. Sometimes we don’t see eye to eye, like when I jump in the fish pond or dig holes in the garden or — best of all — do both, then run in the house with mud all over my paws. They scold me but oh well. We couldn’t be goose dogs without them. See, they know how to drive. It’s not like they can give us a bus token and say, “Now go to work.”

So maybe Dulce and I will see you in the park some day. After we’ve chased the geese, we’d really, really like it if you would play stick with us.