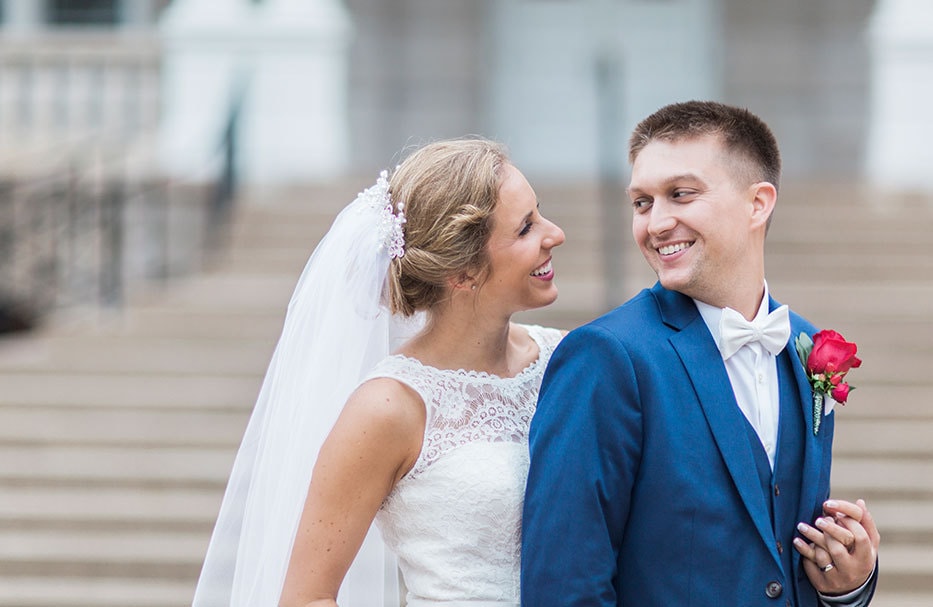 Rachel Brocksmith and Benjamin Brammeier married July 3, 2016, at Columbia’s First Baptist Church, followed by a reception at The Roof in the Broadway Hotel. Rachel and Ben celebrated a joyous occasion. Even their dog, Ginger, approved.

Mutual friends and a coincidence brought the couple together in 2013. Both were attending weddings in Columbia. They met at a bachelorette party held at The Penguin. In the course of an ordinary conversation, they learned that Rachel had gone to high school with the groom at the wedding Ben was attending. A Facebook search provided Ben with Rachel’s contact information; the couple soon found they had more than friends in common.

The relationship came with a caveat, though. Rachel made it clear on their first date that if her dog, Ginger, didn’t like him, their future as a couple was doomed. As a result, he showed up at the door, not with flowers but with dog treats. Ginger wagged her approval. As the relationship grew and lasted, Ben made a plan. First he asked Rachel’s father for approval to marry her. Then he asked for family diamonds for her ring, to add to the one he had chosen for her custom-designed ring. Finally, he was ready for the last step.

He took Rachel and Ginger on a walk through a field. They sat down on a bench to enjoy the view and Ben, addressing Rachel, said, “I’ve asked everyone’s permission to marry you except one.” Turning to the dog, he said, “Ginger, would it be okay with you if I become part of the family?”

He pulled out a realistic-looking ring that matched Rachel’s and attached it to Ginger’s collar. Then he turned back to Rachel, dropped to his knee and asked her to marry him. He slipped the real ring onto her finger as her eyes welled with tears and Ginger licked their hands. “The ring was covered in slobber and love by the time I wiped the tears from my eyes to get a good look at it,” said Rachel.

A family friend, John Thomas, who is a minister from Shelbyville, officiated at the wedding. The couple adhered to a patriotic theme in keeping with the July 3 date. Red roses graced the altar in two large vases and the wedding party was decked out in red, white and blue.

Rachel wore a David’s Bridal brand white gown with lace around the bodice and shoulders and carried red roses. She wore a veil made by her aunt, Lesa Brocksmith, and a pearl bracelet borrowed from her mother.

“We wanted the ceremony to be short and sweet,” said Rachel. “John Thomas did a wonderful job of telling our story. He said a simple message and prayer before we exchanged vows and rings.”

After the ceremony, the wedding party crossed the street to The Roof in the Broadway Hotel, where small plates, an open bar, live band and slide show of the happy couple’s lives helped people mingle and celebrate. A traditional four-tier white cake decorated with gold dots and topped with red roses carried on the wedding theme.

A table was set aside to showcase photos and stories of their families, going back generations. “We wanted to be surrounded by family on our special day, even the ones that came before us,” said Rachel. “We spent hours talking to our family members and researching to get the pictures and stories to display. We also had our engagement pictures turned into a guest book that people signed at the reception.”

While doing family research, Rachel and Ben discovered their families originally came from Germany, so that became their honeymoon destination. They stayed in Munich and traveled every day to other parts of Germany and Salzburg, Austria.
The couple now resides in Columbia in a house that backs up to a dog park (another bow to Ginger). Rachel is a sales director for McNerney Management Group, an insurance brokerage, and Ben attends law school at Mizzou.

Looking back, Rachel realizes her mother and grandmother were being brave beyond words throughout the ceremony and reception.

“My grandpa was diagnosed with stomach cancer in early June and was in hospice the week before my wedding,” she said. “My grandma and mom had just finished getting their hair and makeup done when my mom got a call that he had passed. They vowed to not cry and not to tell me or my family until the next day. The strong women in my family celebrated and made me feel special all day.”

Her grandfather made a contribution to the day, too, though Rachel didn’t know it at the time. “The weather forecast was for rain until 9 p.m. My grandpa passed away a little after 2 p.m. and a few minutes after that the rain stopped,” Rachel said. “My grandpa stopped the rain and had the best seat in the house to watch the wedding: Heaven.”

Rachel is the daughter of James (Jim) and Vicki Brocksmith of Hartsburg. Ben’s parents are George Brammeier of Bradenton Beach, Florida, and Teresa Jones and stepfather Gary Jones of New Port Richey, Florida.

Private: A Will To Wed