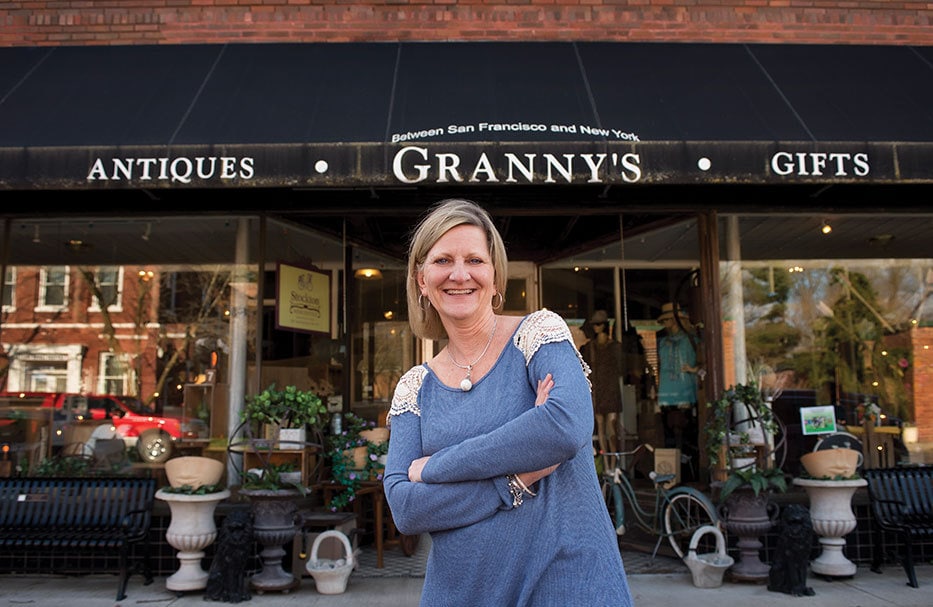 A Perfect Fit for Rocheport

If Rocheport were a jigsaw puzzle, John Zondca and Diane Dunn would be a pair of pieces that fit exactly in its center. Having dropped out from the 21st Century’s stressful pace of life, they’ve made a place for themselves in Rocheport, a picture-perfect community just minutes from Columbia.

The couple is living a dream, one shared by millions of middle-aged city dwellers. Diane has retired and now runs several small businesses in a place where everybody knows her name. John manages an additional business they own and serves as the town mayor. But there’s nothing dreamlike or sleepy about either of them. They are awake, alert and active – managing their three businesses, plus supporting their community in a variety of ways.

Diane is the third-generation owner of what is now a gift and home decor store, Stockton Mercantile. It was previously an antique store, known as Granny’s Antiques. Her father purchased it from his mother (Granny Stockton), and Diane purchased it from him in 2003. Although she would visit her grandmother in Rocheport, Diane spent most of her life in Columbia. She can be found most days behind the counter, meeting and greeting customers, helping them find just the right gift or home accent piece. Her mother, Rose Prewitt, a petite, black-haired woman, now 80 years old, still helps out part-time, and can typically be found ringing up sales or putting inventory away.

Stockton Mercantile is more than a store: it’s a vital part of the community, drawing tourists who bike to the town from the Katy Trail or drive in for a few hours of shopping, strolling its tree-lined streets and dining. Unlike other stores in Rocheport that close on Mondays and Tuesdays, Stockton Mercantile is open seven days a week. For locals, such as Leslie Larkin – a longtime friend of the family – the store hours say a lot about Diane and John.

“I like that they’re always here. Diane has made a commitment to be open so that when someone on a trip who’s heard about Rocheport comes here, at least someplace is open,” Larkin says. Diane and John’s commitment to the community extends beyond keeping long hours. “They would do anything to take care of the people in this this town,” explains Larkin. “They have a keen interest in young people and try to support everyone.”

Located on Central Street, in a brown brick building dating back to 1928, the store’s high ceilings, vintage display cabinets and oak floor give it an authentic antique atmosphere. There’s a little bit of everything in the store: chocolate, jewelry, candles, paintings, knickknacks, a boutique area, an occasional antique, cards and wall hangings. Although thousands of items are displayed in the store, it doesn’t feel cluttered. The art of displaying merchandise and creating an interesting yet pleasant space is something Diane enjoys and is proud of.

“There’s a lot of work behind the scenes,” Diane says. “But if you love doing it, it’s worth it.”

Before retiring this past June, Diane had grown used to working seven days a week – five days at her insurance job at State Farm, followed by weekends at the store. On Wednesdays through Fridays, Rose held down the fort, keeping the store open. Their teamwork got them through the 12 years that Diane commuted to Columbia from Rocheport, a 2,200 square-foot living space that she and John built above the store.

John, who has a construction background, did most of the work himself. “She says ‘we’ did all the remodeling. I’d like to legally change my name to ‘we’,” John jokes. Clearly, he enjoys the role he plays in Diane’s life and business. If a shipment of heavy boxes comes in, John does the lifting. If displays need to be built, John finds the time to build them. And when Diane’s son decided to build a house in Rocheport, John volunteered to do much of the construction work.

John had never lived in a small town before moving to Rocheport with Diane. But once transplanted from Kansas City, he thrived in the small-town environment. He has served as mayor for the past eight years, and when he’s not busy with city business, he serves as president of the Rocheport Area Merchant Association and president of the Moniteau Housing Board of Directors.

Somehow, between all his civic obligations, John finds time to manage the Rocheport General Store and Cafe, a family-style restaurant he’s owned for the past seven years. The restaurant, like Stockton Mercantile, has wooden floors, high ceilings and massive storefront windows. The wooden shelves that line the walls are original, from the days when it was an apothecary.

“It’s like an extension of my house, I want you to be able to relax and come in and have a good time.” John says. “No reservations, no dress code, and we have live music on the weekends.”

John has the perfect personality for a restaurateur or a mayor. He’s gregarious, he doesn’t take himself too seriously, and he has a sincere desire to create a welcoming and fun environment. As well, he willingly takes on other people’s problems. John, who is proud of his Polish heritage, is familiar with an old Polish proverb, “This is not my circus, and those are not my monkeys.” The phrase might be said when someone wants to avoid being stressed by someone else’s mess. Last year, when the town threw a birthday party for its mayor, Diane had a cake decorated that expressed John’s philosophy of caring for others.

The cake read: “This is my circus, and these are my monkeys.”

As a married couple, John and Diane fit together nicely. Their personalities have no sharp edges, having been smoothed out by a lifetime of experiences. Diane has struggled with a hearing problem most of her life and recently got a cochlear implant. Their marriage was a merger of two families from previous marriages, and between them they have five grown children. The two are easygoing and enjoy meeting others. They share the same commitment to each other, their families and their community. Both put others at ease instantly with their next-door-neighbor hospitality.

Diane considers herself retired, despite her business responsibilities and long days. When asked if he ever thinks of retiring, John, who is a bit younger than Diane, replied in jest, “Are you kidding? Not with this woman.”

Keeping up with Diane keeps him busy. In addition to their restaurant and Stockton Mercantile, the couple owns a non-hosted B&B with one of Diane’s friends. John does the lawn mowing and maintenance on the 100-year-old building, which has room for up to eight. Diane keeps the kitchen stocked with breakfast foods that guests can cook. Mostly, groups of girlfriends stay at the Inn, but sometimes it rents to families or several couples. Diane started the B&B because she wanted to provide a comfortable setting for groups of women or couples to stay.

“When my girlfriends and I get together, we like to eat a little bit and shop a little bit, but we really want a place where we can sit and talk and catch up. If you get two hotel rooms, you sit on beds, and in a typical B&B you have a room or two and you have to be quiet after 9:00. I envisioned a place where you can have the whole place to yourself and still have other things to do,” she explains.

Although their days are full, there’s nothing hectic about John or Diane’s manner. At work, they seem to be at play. Referring to her long days at the store, Diane says, “This is fun. It’s not like a job. I love doing this because you meet people from all over.”

John adds, “It’s amazing to see how many people come to Rocheport. We met two young kids from Germany, walking across the states; we had a group in here from London; and last weekend we had two Japanese students who wanted to see a real U.S. town, the way towns used to be, not a big city.”

About six years ago, John started a tradition in Rocheport that helps preserve its small-town flavor. He turned Thursday evenings into locals’ night at his restaurant. “I’d fix something special that wasn’t on the menu, and five or six people would come in for supper. Last Thursday, we had about 60 people for locals’ night, and it’s become the social hub of Rocheport,” John says.

Diane looks forward to Thursdays as another chance to enjoy her friends and neighbors. “It’s kind of like a town happy hour, very much a social part of this town. And it’s how you can meet people when you come to this town. The great thing about locals’ night is it’s still face-to-face. You aren’t texting people,” she says.

John and Diane’s love for their town and the people who live in it hasn’t gone unnoticed. Last year, the Friends of Rocheport named them Citizens of the Year. The couple isn’t motivated by a need for recognition or awards. Pointing to the road, leading into town from the south, Diane says, “You just fall in love with this town. When you come down that hill, you just slow down a bit. You step back in time.”

Tell Me About It