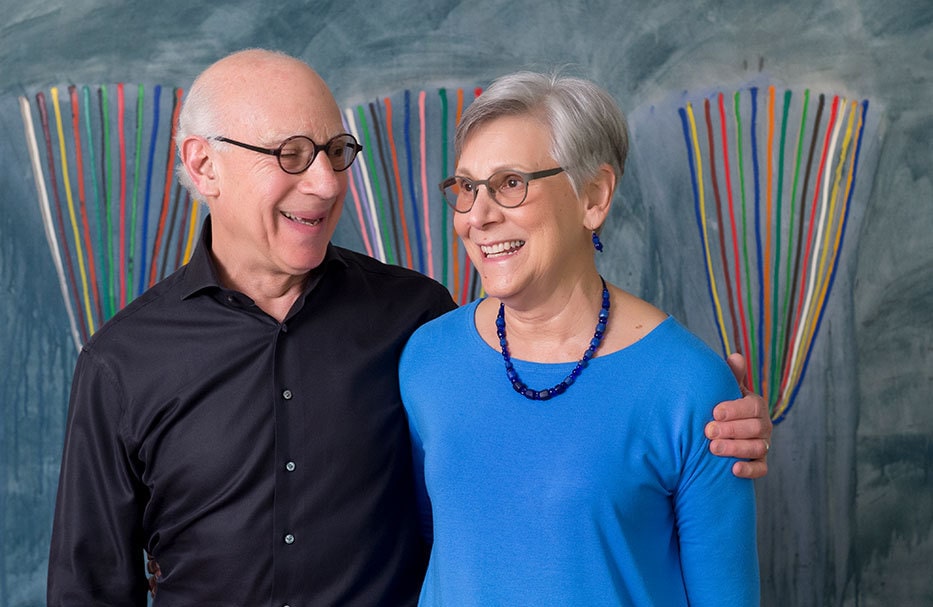 Natalie “Nikki” and Aaron Krawitz’s Columbia home has the same feel as others in its neighborhood — manicured yard and a nice front porch on a quiet cul de sac. It’s what’s inside that changes the view when you walk through the door.

An extensive art collection draws the eye from wall to surface to wall with stunning colors and textures, and when Nikki and Aaron start talking about the art in their home, their faces light up.

For each piece, they know the artist’s name, where they bought the piece and in many cases, artistic details about the medium. They speak about the artists whose work is an integral part of their home as if they are close friends. Some are. At the very least, they have left an indelible impression on the Krawitzes.

It’s clear as they speak, they have a strong connection to each piece. Nikki points out a Ghanaian artist’s piece near the front door.

“I love that. I like it because I think it has a lot of depth to it,” she says. “If you look at it, you can see the multiple layers, and while it looks two-dimensional, it really has a three-dimensional quality. It’s got a lot of shimmering light in it.”

From trips to Africa to New Zealand, Canada to Mexico, Peru to Argentina, Sweden to Australia and a host of countries in between, Nikki and Aaron have an affinity for folk art for both its aesthetics and its affordable nature.

“We’ve never worried about will this piece of art go with our house, in large part, because we’re attracted to certain kinds of art, certain color. So it works. The art stands on it’s own. We’ve also never bought a piece of art for a particular space,” Nikki says. “We’re reaching a point where we keep saying we’re not going to buy any more but …”

Aaron interrupts with another piece, “These are Swedish…”

Another Phase Of Life

The Krawitzes’ appreciation for art has developed over the 50 years they’ve been married. In the last decade or so, they’ve had more time to devote to their passions. As a retired University of Missouri system chief financial officer and an MU professor emeritus in mechanical and aerospace engineering, Nikki and Aaron appreciate problem solving and order, but also the nuances of the arts and culture.

Nikki is still involved in higher education. As a consultant for institutions and organizations, she imparts her knowledge and experience through workshops and classes across the country and by working with colleges and universities to meet financial challenges.

“At the end, I can go home,” she says, “and hopefully have put them on a path to financial sustainability. “It’s another phase in my life. I like to be busy. I like to give back to the community in different ways, and then I like to also do the things that I enjoy.” Nikki serves on the Endowment Foundation Board at Stephens College and the Landmark Bank Board, among others. More recently, she’s added the Ragtag Film and Media Society Board as chair of the finance committee, and the Hillel Foundation board on the Columbia campus to her schedule.

Aaron agrees, “It’s a new phase of life, and it’s, for me, another phase of life. I can pursue things now that I couldn’t do before.” Like community theater. He started the acting gig late in life, he says. He’s been involved in Columbia community theater for more than 20 years, and serves as chair of the Columbia Commission on Cultural Affairs.

His favorite role? It’s a three-man show called “Art,” which he has performed two different times. “It’s about modern art, but it’s mostly about relationships,” Aaron says. “Male relationships. Marvelous.” He is currently in rehearsal for “Pump Boys and Dinettes” at the Maplewood Barn Theater in late May and early June for which he’ll play the harmonica.

In between workshops and performances, they both keep moving. Regulars at Wilson’s Gym and the Katy Trail nearby, it’s all about staying active and involved.

Bringing culture beyond Columbia into their lives, travel is a constant in Nikki and Aaron’s life together.

Neither have a favorite place or an itch to return to a particular destination, they admit. Much of their travel has been of convenience — Canada to visit their son and his family, Mexico to visit Aaron’s sister, Argentina for a nephew’s wedding and France to visit old friends.

“There hasn’t been a trip that I’ve taken that I haven’t loved,” Nikki says. Last fall she revisited Africa with three friends. She and Aaron had gone before, but this visit she had the opportunity to go river rafting on the Nile and hiking to see the mountain gorillas.

Nikki is the more adventurous of the two, Aaron concedes with a smile as she tells a tale about taking micro gliders over Victoria Falls during a visit to Zambia.
Sightseeing is one of three things they focus on when they travel, Aaron says, the other two being art, of course, and food.

“When we travel, we plan out the food. The food part is really important,” he says. “We study the restaurant scene where we are, and we target certain restaurants that we go to. We don’t just walk down the street and say, ‘That looks interesting.’ ”

Food further influences their diet after each trip, Nikki says, adding that trips to Turkey, Peru and Japan provided inspiration for her cooking when they returned.

“I’ll go anywhere, and I’ll have a good time where ever I go,” Nikki says. “It’s sort of the same thing with cooking. I like to try different things, and I really enjoy ethnic dishes more.”

Indeed, if Nikki and Aaron aren’t out supporting local theater or taking in live music, they can be found patronizing any number of locally owned restaurants, but the arts are prominent in much of what they do.

“The arts and art advocacy is an important part of our lives. We are fortunate that there has been public support for the arts in the last few years. We hope it continues,” Nikki says.

Gesturing toward the pieces around him, Aaron says, “We really zero in on the art.”