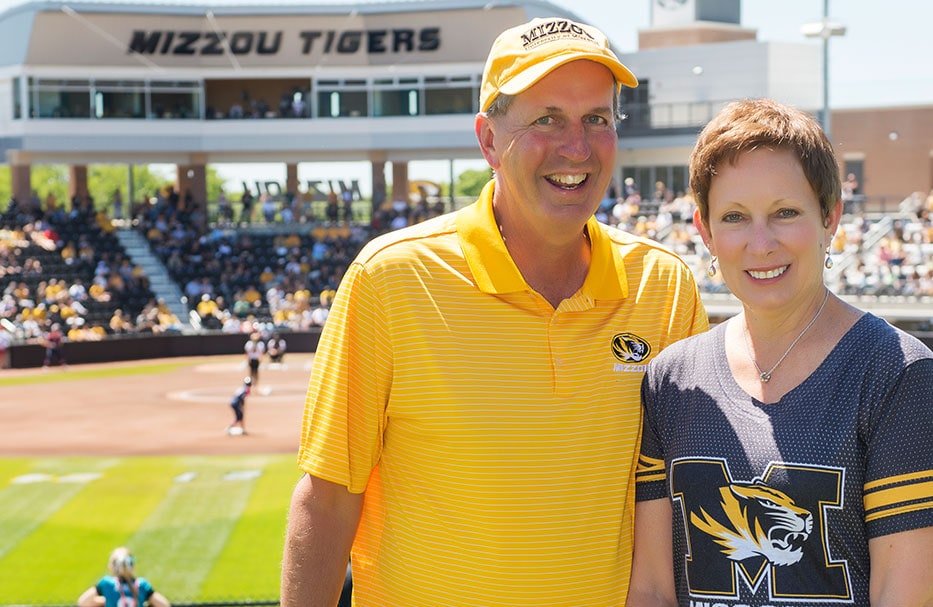 Not all Missouri roads lead to Columbia, and not all the streets of Columbia lead to the University of Missouri. Except in the world that Lynne and Lanny Geary have created together. Lanny is a retired physician; Lynne, a retired nurse. The couple has traveled throughout the world and spent most of their working lives in Kennett, Mo., which is 320 miles from the goal posts at Faurot Field. But their road always takes them back home to Columbia and MU.

“I would say that Mizzou is our anchor,” says Lynne. “It has so much to offer.”

The couple is back in Columbia after a 33-year hiatus. Although they haven’t lived here since the 1980s, they have been frequent visitors, having seldom missed a Tiger home football game in all those years. Devoted fans that they are, they would spend 10 hours on the highway each game, traveling the 640-mile round trip from Kennett.

“We’d get home and put our MU game shirts in the wash, then they’d go straight into the suitcase for next week,” Lynne says.

It didn’t hurt that their two daughters also went to MU. So for several years their trips did double duty, giving them a chance to keep up with their daughters as well as enjoy a ballgame.

Neither is originally a Boone County native, although Lanny spent 11 years in Columbia, going to college, medical school and completing his residency. Lynne lived in Columbia while working at the University Hospital’s pediatric intensive care and the Red Cross. For Lynne, who grew up and went to college in Cape Girardeau, and Lanny, originally from Stover, Columbia never lost its charm. They’ve always thought of it as a home away from home.

Since Lanny retired last year, they’ve been enjoying life here in Columbia at Linkside, a community for people 55 and older, within another community, near the 18th hole at Old Hawthorne. Their move from Kennett back to Columbia seemed natural but wasn’t taken lightly. They had established deep roots in Kennett, where they had raised their daughters and been active in the community. Lanny had established his internal medicine practice there, and when their daughters had reached school age, Lynne worked as a school nurse.

“We had a lot of great friends there,” Lanny says, “and that was a little scary to leave after 30-something years.”

They’ve left their old friends, but certainly haven’t left them behind. One of those friends, Shirley Stephens, used to play golf with the Gearys on Wednesday evenings in Kennett. Now she enjoys visiting the couple in their new home at Linkside and teeing off with them at Old Hawthorne.

After “many, many years” of friendship, she appreciates the couple and their attachment to Columbia. “There’s not much they don’t like about Columbia,” Stephens says. “They are just two wonderful people to have in your community.”

Lanny is tall, slender and has a bass voice, which hits the deep, low notes when he sings in church choirs. In Kennett, he not only sang in a choir but also played roles in community theater. Lanny is affable, and friends say he has a tendency not to take himself too seriously. His demeanor is professional, in keeping with his years of practice as an internist, especially one who was on call much of the time. Despite having spent his professional years assuming serious responsibilities for the health of his patients, he has a casual ease about him.

When asked about his interest in singing, Lanny jokingly says that as a singer, he has a 30-something handicap. But his humor just barely covers up his core personality, which is both serious and conscientious. When learning new songs, he studies the music thoroughly, using an electronic keyboard to help find his way through his part.

When deciding with Lynne whether to return to Columbia for their retirement years, much like the doctor that he is, he weighed a variety of factors before committing to a course of action. Among those factors was the quality and availability of Columbia’s medical care for retirees.

As a former practicing nurse, Lynne also recognizes the importance of retiring in a community where you are always only a few minutes away from high-quality medical care. Like Lanny, she takes a proactive stance toward life. Instead of just hoping for a healthy future, she does what she can now to stay active. “We walk about three miles a day,” she says, “and we take advantage of the exercise classes offered here.”

Leaving all that was familiar in Kennett wasn’t easy for either Lynne or Lanny. But like many other couples entering retirement, they traded the comforts of home and habit for a more rewarding future. “In Kennett, our purpose had been our family, and once the kids were gone, it was getting quieter and quieter for us,” Lynne explains. “Most of our days were spent cleaning a house that was too big for two people. And Lanny was doing a lot of work in our big yard. We thought, this is not making sense any more.”

Columbia beckoned. Their love of MU sports might have kept Lanny and Lynne connected to Columbia, but it wasn’t the primary reason they relocated here. Family played an important role. Their two daughters now live in St. Louis, a mere hour and a half away. Lanny’s older sister still lives in Stover, and Columbia is an easy visit for her. “As we got closer to retirement age, one of the things that became more important was being near family,” Lanny says.

After 37 years of marriage, Lynne and Lanny agree on the importance of staying active and spending time with friends. Lynne is as enthusiastic about discovering new activities to share with her Columbia friends as she is about her past life in Kennett. Two of those new friends are Becky and Steve Burch. Among their common interests is an enjoyment of MU sports, which led them to buy seats next to each other for basketball and baseball. Steve, who plays golf twice a week with Lanny says, “Lanny and Lynne have made a real effort to be involved. They’re committed to everything about MU and life out here at Old Hawthorne. Although they’ve only been here a year, it’s like we’ve known them for 10 years.”

One reason that Lynne and Lanny seem so easy to get to know is that they both share an open, eager attitude toward their life in Columbia. They want to try all the city has to offer them. Before moving to Columbia, they had never heard of the True/False Film Festival and had watched only an occasional documentary film. Having discovered the festival, they went to 15 movies each and are already looking forward to next year’s event.

Together, they enjoy the arts, crafts, movies, almost all MU sports, golfing and walking Columbia’s network of trails, as well as the social life at Old Hawthorne. This past year, Lynne has taken cooking classes, joined a book club and, with Lanny, has joined a wine club and a Canasta social night. For Lynne, the everyday pleasures of living in Columbia still haven’t worn off. “I enjoy the library, the grocery stores, everything to me is new and interesting,” says Lynne. “It feels really strange when we find ourselves watching TV – it feels like we should be out doing something.”

But not everything about Columbia shines and glitters. Lanny and Lynne have had to adjust to traffic in a city that is 10 times larger than Kennett. Downtown parking is another issue, one they’ve solved by Ubering downtown at times when parking spaces are scarce. Rather than complain or stew about Columbia’s traffic and parking, they have turned a negative into an enjoyable situation by occasionally inviting friends to share their Uber ride and to join them for an evening downtown.

That same approach to life – of making the best of situations – is a personality trait that shows itself in both Lanny’s and Lynne’s personalities. “The other day we decided to take a walk on one of the nice trails here in Columbia. We took a bypass we’d never been on, and it took us seven miles before we figured out where we were,” Lanny says.
Someone else may have been disappointed or irritated to have gone astray. But for Lanny and Lynne, the event, like their retirement, was another chance to take a different route. Lynne adds, “We had started at Flat Branch and ended up at the MU tennis complex. We had gotten a little lost and didn’t know where this trail went.”

Was it chance or was it karma? It seems that where ever they go, they end up at MU.