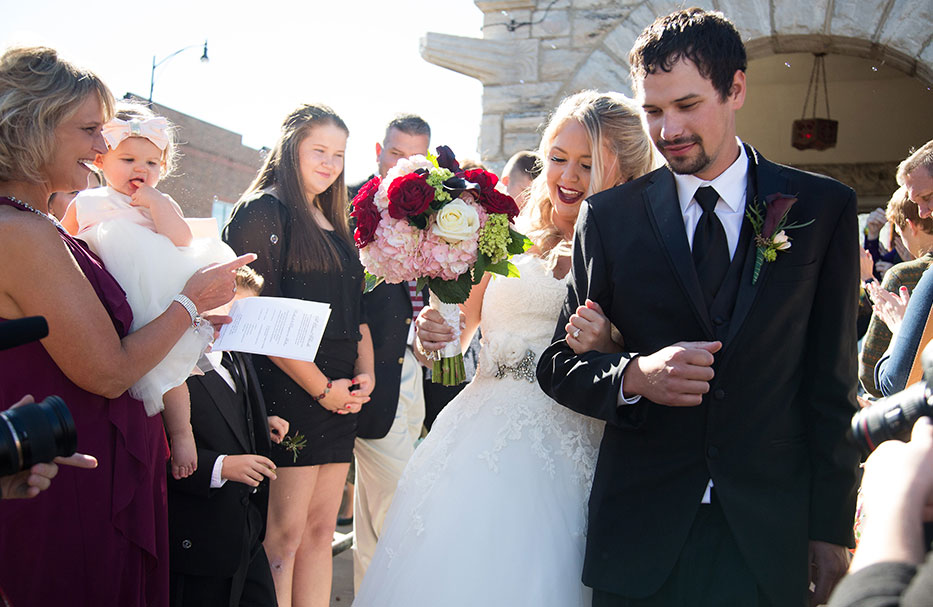 Kristen Elizabeth Cassidy and Schuyler Paul Blevins were wed October 8, 2016, in a ceremony straight out of a Disney fairytale. Kristen had been planning details of the day since she was a child, but she didn’t know then that Prince Charming would turn out to be the boy she met on the Fulton swim team, the Fulton Fins, when they were both 9 years old.

The couple didn’t start dating until after high school, though. They became engaged a year before their marriage, when Schuyler played a trick on Kristen. He called her, frantically asking for help to catch some horses that had gotten loose. When Kristen arrived, she saw Schuyler down on one knee in a ring of candles by a lake. Family and friends witnessed the proposal before popping corks to celebrate the happy occasion.

The couple married at the First Christian Church in Columbia. Larry Brown of Fulton officiated. Guests were seated while a string quartet played Disney love songs. Kristen wore a custom ivory ball gown with a lace bodice, sweetheart neckline, cathedral veil and long earrings with her hair swept up on one side. She carried a hand-tied bouquet of blush pink hydrangeas, aubergine mini calla lilies, and light and dark roses, all wrapped in lace from her mother’s wedding dress. She wore a charm to remind her of her grandfather, who had recently passed away.

The groom and his attendants wore black tuxedoes with black ties and vests. Boutonnieres were aubergine mini calla lilies and Chablis spray roses. Schuyler’s socks were cranberry; his groomsmen’s socks were blush.

The couple exchanged traditional vows in a religious ceremony before advancing to the reception at Sorenson Estate in Columbia where a large white tent lit by chandeliers greeted guests with a warm, blush-colored glow. Tables were covered with white and blush-colored linens, pink floral table-runners, alternating cranberry and aubergine napkins, and decorated with candles. A sheer backdrop, lit from behind, highlighted the sweetheart and bridal party tables. Guests enjoyed multiple cakes in flavors including red velvet, chocolate, chocolate chip mint and raspberry.

Kristen said her favorite moment of the event occurred when Schuyler danced with her grandmother to her wedding song. “It was a way to remember my grandfather and to show our aspiration for a marriage as strong and beautiful as theirs,” Kristen said.

To leaven the evening’s music, her sister did a remix rap to “Ice Ice Baby.”

The couple honeymooned in Punta Cana, Dominican Republic, for a week. They live in Auxvasse, where Kristen works as an events coordinator for Compass Health and Schuyler is an electrician at the Callaway nuclear plant.

Kristen is the daughter of Daniel and Linda Cassidy of Fulton, and Schuyler is the son of Mark and Michelle Blevins of Auxvasse.