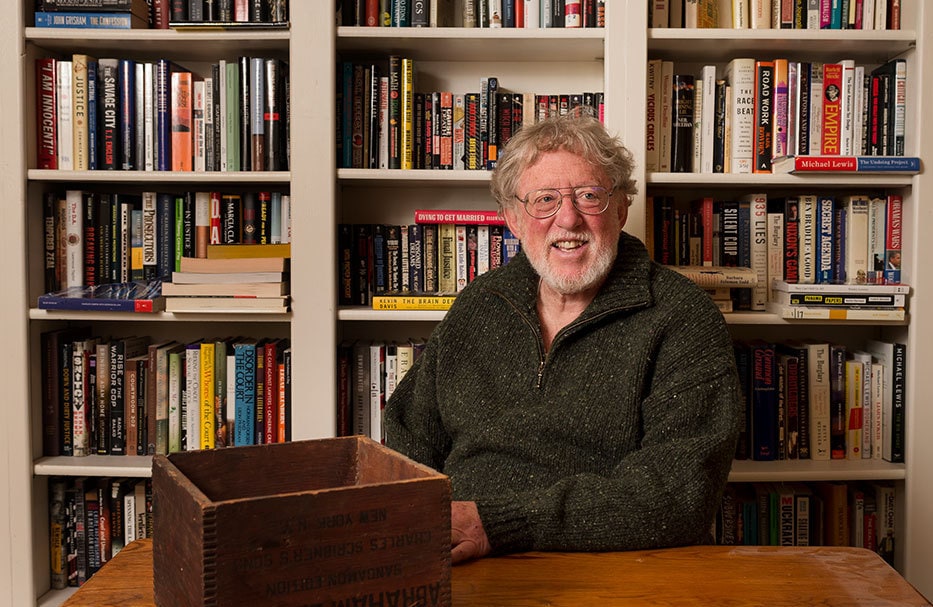 The Art of Truth

When studying the rich tapestry of Columbia’s writing community, Steve Weinberg is a repeating pattern. His threads are integral, colorful and diverse. With over four decades of journalism experience, Weinberg has created a solid foundation in the field.

Weinberg obtained both a bachelor’s and master’s degree from the Missouri School of Journalism at the University of Missouri, and taught several courses for the J-School throughout the following years.

His journalism success, starting in the 1970’s, is marked with a staggering quantity of magazine features, newspaper articles, essays and book reviews. He has published eight books, including “Armand Hammer: The Untold Story,” “The Reporter’s Handbook: An Investigator’s Guide to Documents and Techniques,” and “Taking on the Trust:  The Epic Battle of IdaTarbell and John D. Rockefeller.”

Weinberg has always found time to be heavily involved in not-for-profit organizations.

“In 1983, I was asked to move back to Columbia to work with the IRE – to serve as the Executive Director of Investigative Reporters and Editors, Inc.,” says Weinberg.
In addition to the IRE, Weinberg was involved in the American Society of Journalists and Authors and the Biographers International Organization.

“I was very involved with the National Book Critic Circle,” says Weinberg. “I was vice president for a while.” Steve also found ways to put his investigative journalism to work. He says, “I conceived and co-founded what is now called the Midwest Innocence Project.”

A major factor of Weinberg’s appeal is his perpetual evolution. Upon considering his published books, he recognizes his growth. Weinberg says, “In craft terms, I’m growing and learning.”

“Armand Hammer,” one of his earliest titles, received worldwide attention. “Armand Hammer was very controversial when he was alive. The book came out in 1989 when he was already in his 90s. He was alive for a few years after it came out and he sued me,” Weinberg says. “There was a lot of publicity. He died before it came to trial.”

Public attention aside, Weinberg recognizes that his writing has improved with each consecutive title. While “Armand Hammer” received attention due to the subject, he feels his most recent title, “Taking on the Trust,” shows his growth.

Weinberg is enjoying the process of working on his current project, a highly anticipated biography of Garry Trudeau. He knows that current politics make the work relevant. “Garry Trudeau did his first strip on Trump in 1987,” Weinberg says. “Trudeau has been doing Doonesbury since 1970, but he saw Trump as great material a long time ago. Trump has been a regular character.”

It is difficult to believe that Weinberg is less busy these days, having scaled back after suffering a debilitating stroke in 2015. He still submits book reviews for Kirkus Reviews, Dallas Morning News and the Minneapolis Star Tribune.

He is passionate about the Midwest Innocence Project. “I left the Board of Directors . . . but I am still involved.”

Currently, he has cut out doing magazine pieces beyond the reviews in order to focus on the book. “I am writing as much as I can,” he says. “I don’t have the mental stamina that I used to. Before when I had to, I could write productively 16 hours a day. Now, I still don’t sleep much, but my brain gets weary. I am not writing at my best after four hours.”

Somehow he also finds time for his reading habits. “I get maybe 50 print magazines,” says Weinberg. “Some of the reading is just to make myself a better person.”  Weinberg reads a wide variety of topics, feeding his curiosity about politics, foreign relations and sciences.

Less simple to explain, than these tangible markers of success, is Weinberg’s larger contribution to Columbia’s community. He wants others to continue thinking, evolving and learning. Weinberg is also involved in most of the community writing and reading programs, if not from an organizational standpoint (a board member of Columbia’s Unbound Book Festival) then as a participating speaker or active audience member.

Weinberg’s nature is not simply to record what is happening, but to reach beyond documentation. From his involvement in the Midwest Innocence Project to his Facebook account, where he openly encourages thought, debate and deep considerations of current events, Steve does not shy away from difficult topics or strong opinions. He believes that through words, communication and education an enriched community can impact the world.

“I’ve tried to use Facebook as a salon,” says Weinberg. Browsing his feed, one can find a careful selection of informative and thought-provoking articles, alongside careful considerations and urges for his friends list to share their own.

“You will probably learn something new,” or “Please help me understand,” and “I highly recommend [reading article x] regardless of your beliefs.”  Weinberg invites individuals to contact him for specific guidance of how to get involved — either in bettering their writing, educating themselves or actively making a difference with various organizations.

Though Weinberg is a journalist at heart, one never knows what the future might bring. “I started as a journalist. Like many nonfiction writers I have thought about doing a novel, but I’m not sure I have that gene. After I totally retire, I might try writing a novel and see if I can stand it myself before I show it to anybody.”