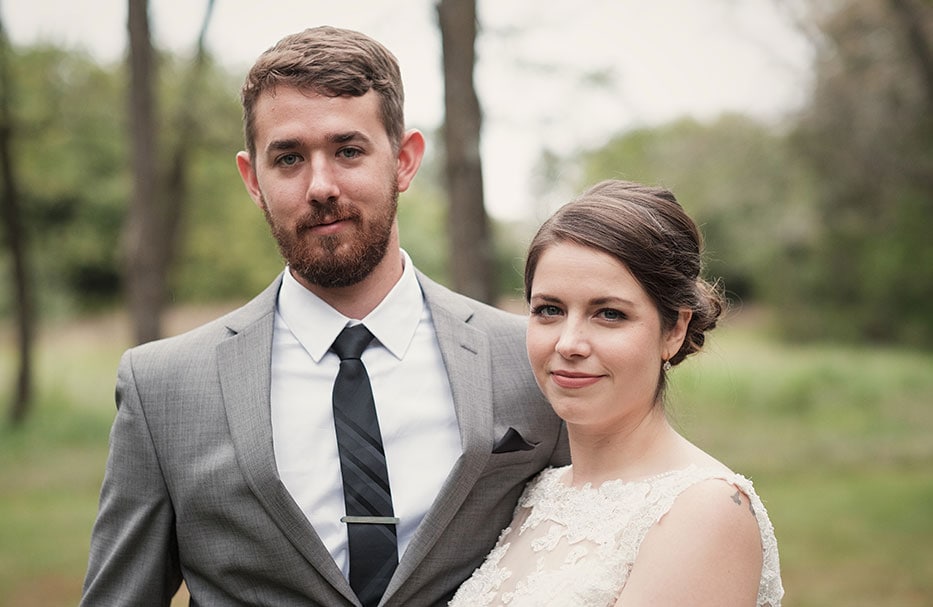 “Your Eyes Close With My Dreams”

Michelle Richmond and Jordan Lamb exchanged wedding vows October 1, 2016, in a clearing surrounded by woods. A nearby log cabin provided the couple with a quiet place for a “first look.” Rather than having groomsmen and bridesmaids, everyone in attendance were attendants.

Michelle and Jordan met through mutual friends at a birthday party and started dating soon afterward. They became engaged on a trip to New Orleans to attend bachelor/bachelorette parties. The group of friends attended a music festival in a park where Jordan asked Michelle to take a walk with him on a bridge. When he presented the ring, they both realized they were standing over a large, ominous body of water; it made them nervous to be holding such a precious item.

“We ran back to join our friends as fast as we could,” Michelle said. “It was a great trip but obviously the best part about it was getting engaged.”

The couple wanted a non-traditional ceremony in a non-traditional setting, so they chose a country property owned by Michelle’s best childhood friend. A grape vine arbor decorated with flowers framed the couple as a family friend, Dave Wilson, officiated. The bride wore an A-line Maggie Sottero gown made of satin with a lace and tulle overlay. It featured a deep V in back with an illusion neckline. A pearl and gold hair piece crowned her braided hair. She carried a seasonal, locally grown bouquet composed of Missouri flowers including zinnias, cock’s comb, celosia, and baby’s breath surrounded by hosta leaves and lamb’s ears. Jordan wore a medium gray suit, white shirt, black tie and white pocket square.

The couple chose not to have designated attendants. “We have both been in so many weddings and, of course, we wanted people standing there supporting us, but that is what the whole wedding is for,” Michelle said.

They chose to have a traditional though non-religious ceremony. Wilson read a sonnet by Pablo Neruda, reciting, “I love you without knowing how, or when, or from where, I love you directly without problems or pride; I love you like this because I don’t know any other way to love, except in this form in which I am not nor are you, so close that your hand on my chest is mine, so close that your eyes close with my dreams.”

The reception was held nearby immediately after the ceremony. Large globe lights and wine bottle torches illuminated the festivities. Peach crates held Mason jar mugs for beverages. Michelle’s father built a rustic bar holding wine slushies, soda in glass bottles and other drinks. Vintage tables were topped with brown linens, candles, and antique books and watches that Michelle and Jordan gleaned from garage sales. The song “Where Did All the Time Go?” completed the theme.

Michelle and Jordan created customized lawn games such as hillbilly golf and giant Jenga that took place nearby. The couple cut a layered raspberry-filled vanilla wedding cake decorated with more Missouri flowers, then they went alone to a barn to sign their marriage license.

“Having that moment just between the two of us, knowing we were married, was indescribable,” Michelle said.

Fireworks punctuated the celebratory night sky at the close of the party.

Michelle and Jordan honeymooned for a week in Aspen, Colorado. They live in Columbia, where Michelle is a nurse for an orthopedic surgeon and Jordan works in commercial sales.

Michelle is the daughter of Willis and Renee Richmond of Columbia, and Jordan is the son of Sonny and Peggy Lamb, also of Columbia.