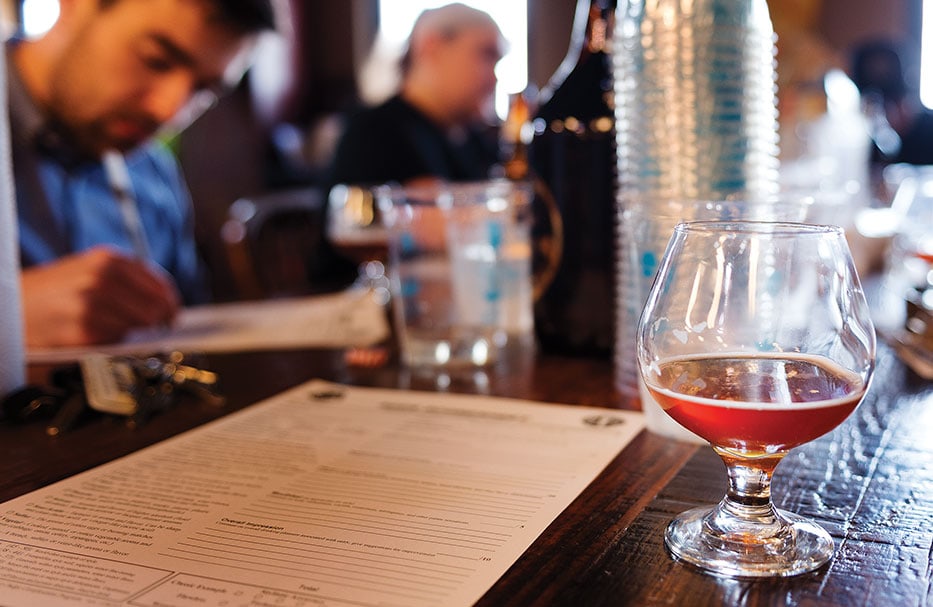 What’s your favorite style of beer? Think about it for a second. Are you an IPA person? Wheat beer? Sour beer? Stout, porter, saison? Chances are, whatever beer it is that you really enjoy was inspired in some way, shape or form by something someone made in their garage, basement or kitchen some time ago.

I’m not saying that exact beer you are sipping on was first created by an amateur at their house, but that’s often where the first kernel of inspiration is discovered. Some of the most successful brewers on the planet started right in their garage, and in the cases of folks like Jim Koch (Boston Beer Company/Sam Adams) and Sam Calagione (Dogfishead), they have taken that hobby and built veritable empires, all the while being some of the most influential beer people not just in the United States, but across the planet.

Homebrewing hasn’t stopped with them and it doesn’t look like it’s slowing down anytime soon. Amateur brewing remains just as influential to this day, and its participants are every bit as passionate as the aforementioned kingpins were decades ago. There’s a reason that a lot of people in the craft beer game, including myself, will sometimes lovingly call homebrewing the “laboratory” of American craft beer.

A fantastic display of this passion is at the annual International Tap House and Logboat Homebrew Festival. Each year, they partner up and invite homebrewers from Columbia to enter their beers for the competition, where the grand prize winner will get to brew a production scale batch of their winning beer with the folks at Logboat.

That beer will then be served at Logboat, all the iTAPs across the state, and usually at other local purveyors of Logboat’s beer throughout Columbia, as well. As you can imagine, this is quite an honor for an amateur brewer.

While the grand prize judging is done behind closed doors, the most enjoyable part of the contest was on Saturday afternoon where all the brewers come out to iTAP, set up their rigs, coolers and kegs and simply pour for anyone and everyone that comes into the bar that day.

The interactions between the standard beer drinkers and passionate homebrewers are really what make the day. I usually enjoy being the person that helps guide folks and educate them on beer, but on this day, the homebrewers get to play that role. I always joke with homebrewers when I say, “There’s only one thing they love more than brewing and drinking their beer… and that is talking to people about their beer.”

JUDGING
Picking the homebrew festival winner is never an easy process and I can tell you, as one of the judges, that we take this part of the process extremely seriously. Wednesday before the competition, a panel of some of the most knowledgeable craft beer people in Columbia, including retailers, vendors and professional brewers hole themselves up at Logboat and critique every one of the entries.

Every entry is tasted, analyzed and discussed by all of the judges. We have detailed score sheets with a rigorous scoring system that judges the beer’s packaging (was it bottled correctly?), appearance, aroma, taste and accuracy depending on the style the brewer decided to brew, and overall impression of the final product. As you guessed, not everything that comes across the table is perfect, and even the winner has noticeable flaws, but to be honest with you, that’s part of the fun.

As I mentioned before, the beers we were tasting aren’t professionally brewed, and they come from amateur brewers ranging from “experienced” to true “novices.” You learn very quickly that things the average person won’t normally think about can affect the beer’s quality. A few minutes too long here and there with your mash (cooking your grains to convert your starches to fermentable sugars), or hop boil, or minor changes in temperatures during any part of the brewing/fermentation process will drastically change the product that ultimately ends up in our glass.

I mentioned that we judge how the product was packaged when we initially grade a beer, and while it’s just a simple box to check off, this year’s entries showed that could be a major issue in affecting the final product. One thing we saw this year were certain beers that weren’t bottled appropriately in terms of not having the correct amount of carbonation or were what we call “low fills.” That means there was too much space for air between the beer and the cap.

Why is that an issue? That air contains oxygen, and oxygen will degrade beer, just like food. This will cause the beer to become flat, which will also do things like mute any of the stronger flavors in the beer and possibly add unpleasant metallic or wet paper characteristics. If you have a flavor or aroma profile you want out of your hops, or other spices/fruit that you added, those components will be diminished.

I think the best way to say it is that it reminds even the most experienced beer drinker just how much care is involved in literally every step of the brewing process, from recipe formulation all the way to packaging. One small slip up can really affect the overall character of the finished brew. The beers that we casually enjoy and probably even take for granted are the product of a tremendous amount of hard work that only comes after years of experience.

LOOKING FOR A WINNER
Finding the winner is something everyone at the table gets excited about. We’ll finish our latest entry and then move on to the next one. We’ll eat a few crackers to cleanse our palates, take a few swigs of water, crack the next bottle and then pass it around, each getting a few ounces in our tasting glasses. We all take a look at the entry form, see what style this person was trying to brew and then give the beer a few swirls, put it up to the light and look at the color of the beer.

We’ll say things like, “Well, this looks like the right color for style” or something like, “This certainly looks the part of a Belgian Dark Strong Ale.” But the ultimate sign is when we all take a good whiff of the beer and then simultaneously give each other a look and say to ourselves, “Wow… this might be the one.”

You cross your fingers and hope that the flavor matches everything else, and when it does you kind of sit back and collectively say “Yeah, that was spot on.” Then you finish up your scoring, exchange notes and say, “Well, unless one of these next five beers knocks our socks off, I think Kyle Waller is going to take this.”

Your next move is to see how much is left because it was so good you wanted a little bit more.

THE WINNER
This year’s winner was from Columbia, local Kyle Waller, who brewed an absolute spot on “quad,” or in more technical terms: a Belgian dark strong ale he called “Grand Slam.” It was a wonderful dark purple with ruby hues. It had notes of raisins, brown sugar, figs, dark cherry and hints of what I can only describe as “candied grape.”

The booze and alcohol was appropriately noticeable for a beer that came in just under 10% ABV, yet remained highly drinkable. When you have a table of experienced beer drinkers and you all agree it reminds you of Trappist Rochefort 8 (look it up, it’s a world-class beer), you know you are doing something right. The fact that it was created in his garage is surprising, yet ultimately impressive.

I asked Kyle how and why he came up with the recipe and it was simple. Kyle “loves Belgian-style ales, specifically dubbels and quads” and got the suggestion for the recipe from a book called “Brew Like a Monk” and “from chatting with other homebrewers, both at the Worts (the local COMO homebrew club) and online brewing forums,” he said.

Kyle brewed an earlier version of the same beer and had received “terrific feedback” that ultimately “helped the beer taste much better.” The beauty of the recipe, which he concedes was rather “simple” is that there is a ton of care taken to make sure the fewer ingredients are treated that much more carefully.

The essence of the great Belgian ales often comes from the character of the yeast that’s used, and that’s where his beer won us over. So much of the great character I was discussing in terms of dark fruits and wonderful alcohol warmth comes from a properly controlled fermentation process that lets the yeast really shine.

I was fortunate enough to announce the winner, and to say Kyle was excited is an understatement. Kyle mentioned that winning was “kind of surreal and enormously gratifying.” He continued, “most homebrewers who have done it for a while have thought about opening a brewery of some sort… getting to walk into iTAP or Logboat, see their beer name, and think

‘Heck yes, I was there from beginning to end, making a beer that hopefully people are going to like.’”

Also, like many homebrewers, Kyle really relishes the ability to hear feedback from both industry vets and customers, alike. “Brewers take a lot of pride in their beer, so it’s often difficult to be completely critical of something you made. That’s why the scoresheets and detailed feedback brewers get from homebrew competitions and club meetings are essential,” he said.

“Detailed comments and reviews are really how we all get better at this hobby,” Kyle said. Further, public events like the iTAP and Logboat homebrew competition are great at introducing the public to homebrewing. Kyle likes that people can “taste a beer they like, chat with the brewer, and realize that ‘Oh man, I can make something like this on my stove!’” He hopes that during this process, “someone is inspired enough to go grab a kit and give it a shot.”

The only downside of this story is that due to Logboat’s tight brewing schedule, we most likely won’t see this beer anywhere around tap until April of 2018. Sit tight, as I can assure you this will be a beer worth waiting for.

FINAL THOUGHTS
At the end of the day, this homebrew competition is a very fulfilling event for anyone involved in the local craft beer community, from brewer to consumer. The beer we get to drink is literally produced by amateurs at their homes, on their own dime. They aren’t trying to turn a profit, or gain any notoriety necessarily, they are just passionate about beer, brewing and sharing that passion with friends and the beer drinking public.

The fact that we get to pick someone to showcase that passion on a larger scale by brewing with Logboat and having it served at multiple bars across the state is just icing on the cake for the brewer and craft beer drinker, alike.

Heating up with Rosé