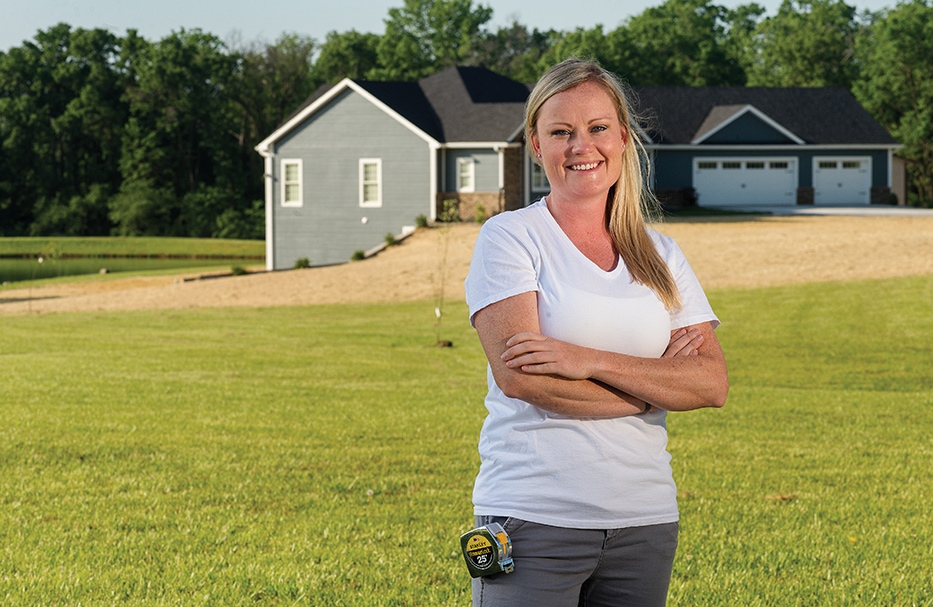 Had Beth Maddox followed her college career path, she’d be wearing a white lab coat with a stethoscope draped around her neck. She’d probably be a resident physician at a local hospital preparing to become a board-certified member of Columbia’s vast medical community. Her name would be embroidered across the pocket of her lab coat: “Beth Maddox, MD.” Instead, she wears a leather tool belt and muddy work boots to work everyday. Beth Maddox, general contractor and owner of Laurmar Consulting, broke through what some may call the “concrete ceiling” in the construction industry.

Maddox’s rather circuitous journey into the construction business began at college, but not in the classroom. After earning a degree in marketing from Missouri State University in Springfield, Mo., she set her sights on medical school and to prepare, enrolled at the University of Missouri – Columbia to pursue a degree in biochemistry.

“I didn’t just want to go back to get the prerequisites for getting into medical school,” she explains. “I wanted to go ahead and get my degree in case I decided not to go to medical school. It was just something I wanted to do because I wasn’t loving the marketing field.”

Her plan to become a physician, however, took a sharp turn during her senior year at MU when her sorority, Sigma Sigma Sigma (Tri Sigma) asked her to consider founding the non-profit corporation that would manage the sorority when it moved onto campus. Every Greek house is managed by a separate non-profit corporation and in 2011, Maddox founded and became CEO of the Eta Chi House Non-profit Corporation, the organization that would manage everything from food service and maintenance to contract negotiations. Later, she was asked to work alongside the project manager who supervised the building of the Tri Sigma house.

“I spent my entire senior year finishing up my biochemistry degree while also overseeing the entire construction project with the project manager,” she says. Initially, she thought work for her sorority project would only take a couple of hours a week but, in reality, it took a lot more time than that. So much more time that when she “adopted” a brick to place on the front of the sorority house, she had it etched with the words, “Blood, Sweat and Tears.” What began as a hobby reignited a long-dormant passion for construction.

“I just loved it and found myself asking, ‘Why can’t I just do this instead of medicine?’” This sudden change in direction was actually more of a return to her first love than wandering into a brand-new career.

Maddox began spending time on construction sites with her father shortly after her mother died when she was five years old. Her father, then a single dad, began taking her and her sister to work with him in the evenings.

“When I was remodeling a doctor’s office and had to work at night, I’d go in at eight and the girls would color on sheet rock while I worked and I’d make a pallet on the floor for them to sleep on,” explains Kirby Maddox, owner of RKM Corporation, a residential and commercial construction company.

During those nights on the job with her dad, Maddox fell in love with building. She started holding boards in place for him to nail when she was just a little girl, and he’s been mentoring her ever since. “I just love bouncing ideas off of him. If I think something does not look correct, I’ll just run it by him,” she says of her “perfectionist” dad.

“I love being challenged and learning new things. It helps me become a better builder,” Maddox explains. So much better that she sometimes helped her dad with his projects. “I recently asked my dad, ‘What do you need me to do while you’re gone?’ so he wouldn’t be stressing while he’s on vacation. I’ll be puttying nail holes in the trim and doing some painting so his project will stay on schedule,” she says. “And, I can call on him when I need help.”

Maddox’s first project came after completing her biochemistry degree when her father handed her a project that he simply couldn’t fit into his schedule. And she did a total gut of a commercial building that she “took completely down to its shell.” She did a lot of the work herself under her father’s supervision.

She recently completed a 5,800 square foot custom home with a two-story garage that sits on 13 acres just east of Columbia. Lyndell and Sharon Scoles asked Maddox to build their house because they knew she’d been trained by her dad, an expert builder, and could defer to him if she had questions along the way. All those years of dad’s mentoring obviously paid off.

“She’s a lot like her father, a perfectionist, and very keen to details so we knew it would be done right,” Sharon boasts. “I think every builder should have a lady that works with them because a woman has a different perspective than a man does when it comes to design and the practical use of things. As the woman of the house, I could relate to her and there was never any such thing as a stupid question,” she adds. “She’d go the extra mile and go beyond what the standard is. She probably used more Ribar than the average builder and tied it more than the average person because she wants it to be right,” remarks Sharon.

But Beth Maddox is no average builder and no average person. She’s the biochemist who signs her name “Beth Maddox, GC.”