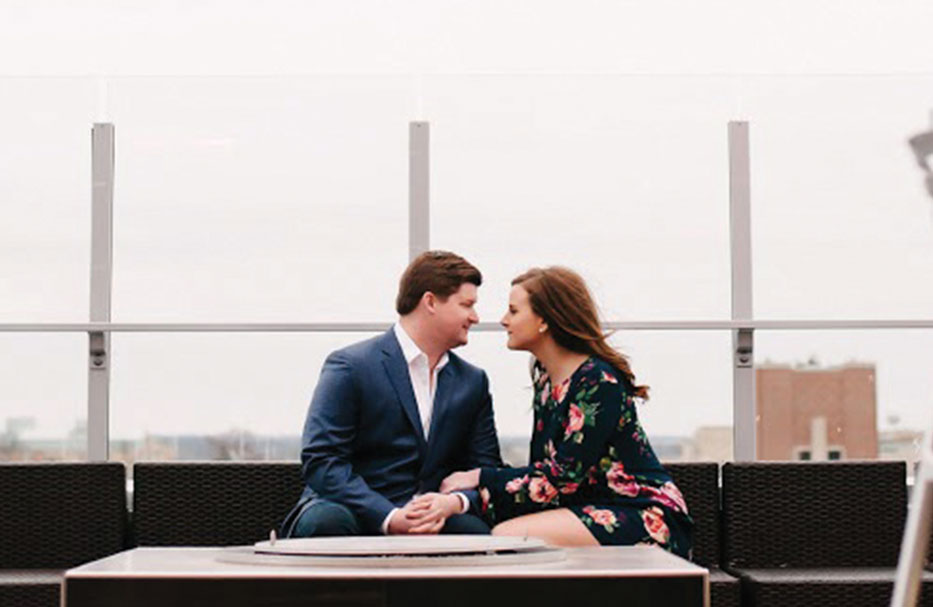 Kelly Jefferson, of Columbia, and andrew george, of Kansas City, were married on June 11, 2016, at Columbia Country Club.

Kelly graduated from Hickman High School in 2013, and received her bachelor’s degree in financial counseling from the University of Missouri in May 2017. Andrew graduated from Staley High School in 2013, and will receive his bachelor’s degree in personal financial management from the University of Missouri in December of 2017.

The couple met at summer camp when they were 15, and then reconnected in college. The couple honeymooned in Cancun.
The bride’s parents are Lori and Kurt Jefferson, of Columbia. The groom’s parents are Casey and Doug Ward, of Kansas City, and Jennifer and Tracy George, of Smithville.

Kelly is a teller and teller coach with Landmark Bank in Columbia. Andrew is a financial representative with Northwestern Mutual in Columbia.

Kate Osborne and Jake Morse were married on June 24, 2017 at The Stanley in Lee’s Summit.

The couple met in July of 2007 while Kate was working as a lifeguard at Wilson’s Beach and Tennis Club. Jake was new to Columbia and came to the pool with a group of fellow Rock Bridge football players. The two began dating later that summer and have been together ever since.

Kate is the daughter of Lori and Jeff Osborne of Columbia. She graduated from Rock Bridge High School in 2009, and earned her BS in nursing from the University of Missouri in 2013. She is an RN in the emergency room of Children’s Mercy in Kansas City.

Jake is the son of Michele and Jeff Morse of Basehor, Kansas. He graduated from Rock Bridge High School in 2008 and earned his BS in physical education from Baker University in 2013. He is the offensive football coordinator at Baker University in Baldwin City, Kansas.

Anne Osborne and Chris Hurst, both of Columbia, will be married on October 14, 2017, at the Sorenson Estate. The couple first met during high school through mutual friends. Like Anne, Chris was a Kewpie, however he was a year ahead of Anne. They reconnected after college here in Columbia in 2012, on Anne’s younger sister’s birthday.

Anne is a 2006 graduate of Rock Bridge High School. She received her bachelor of science in elementary education from William Woods University in 2011, and her master of arts in teaching from Columbia College in 2015. Chris graduated from Hickman High School in 2005.

The bride’s parents are Lori and Jeff Osborne of Columbia. The groom’s parents are Ardith and Craig Hurst of Columbia.
Anne is a fifth grade teacher at West Boulevard Elementary. Chris co-owns Columbia Pool and Spa with his father.

Allison Clarke and Scott Thompson, of Columbia, will wed on October 7, 2017, at Missouri United Methodist Church, with a reception to follow at Serenity Valley Winery in Fulton.

Allison graduated from Rock Bridge High School in 2006, and received her undergraduate degree in journalism from the University of Missouri in 2010. Scott is a 2006 graduate of St. James High School, in St. James. He earned his bachelor of science in management information systems from William Wood University in 2010, and then earned his master’s in business administration in 2017.

The couple met while both were working at Veteran’s United Home Loans, and began their courtship over morning coffee.

The bride’s parents are Melissa and Lane Clark of Columbia. The groom’s parents are Norma and Lonnie Thompson of Columbia.
Allison is a servicing project manager with Veteran’s United Home Loans, while Scott is a product analyst with the company.