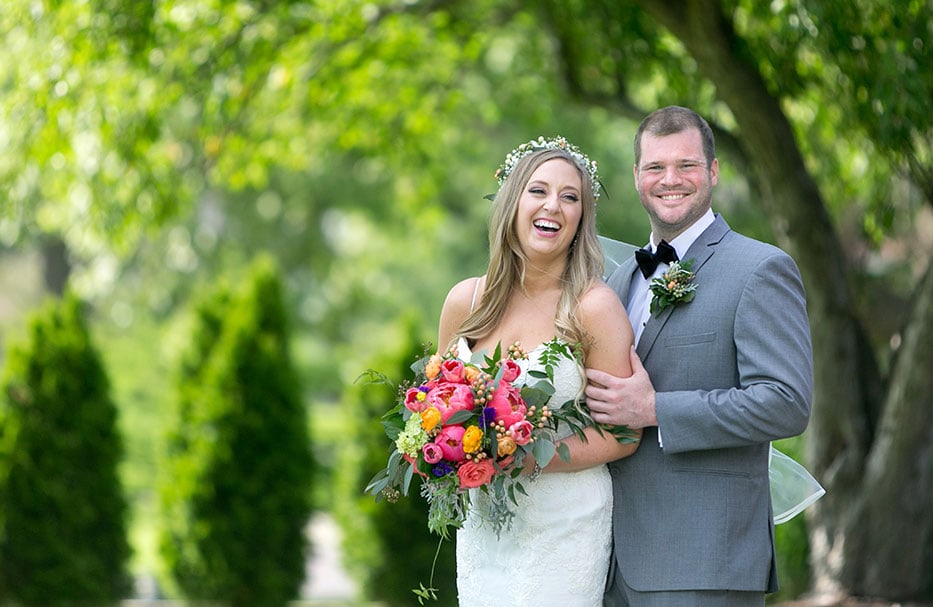 Jill Elder and Josh Smith were wed June 4, 2016, at the Columbia Country Club. Wedding guests received s’mores kits to signify the camping trip where the happy couple got engaged, and so guests could spread “s’more love” at home.

Jill and Josh met at a barbecue during the summer of 2012. “We continued running into each other for the next few weeks,” Jill said. “Finally, he asked me for a date.” They became engaged on a camping trip with friends at Pike National Forest in Colorado on July 4, 2015.

Jill and her mom decided the wedding theme should be “garden chic” — lots of flowers and a relaxed, fun atmosphere. “After meeting with Kent [of Kent’s Floral Gallery], our vision came together. He completely transformed my ideas into more than I could have imagined,” Jill said.

She wore a lace mermaid dress by Monique Lhuillier. It featured a sweetheart top with delicate straps and a simple flower crown (also from Kent’s) and a veil. All the bridal party’s earrings were made by the bride’s friend (and bridesmaid), Lily Dawson of Lily Dawson Designs. Jill wore her hair down, luxuriantly curled. She carried a large, bright, multi-colored bouquet of peonies, ranunculus, garden roses and greenery. Bridesmaids carried similar bouquets and wore steel gray full-length gowns of various styles.

The lush green golf course of Columbia Country Club served as a backdrop to the ceremony through large picture windows. Peonies lined the aisle leading to a trellis decorated with bright flowers and greenery. Judi Schoonover, a longtime friend of the bride’s mother, officiated over a simple ceremony, adding personal touches from her acquaintance with the bride. Hillary Overfelt Hinrichs, a friend of the bride, provided music with her ukulele.

After the ceremony, guests adjourned to the Columbia Country Club patio for cocktail hour. They walked through a breezeway strung with globe lights. In the main reception ballroom, mantels were topped with large cherry blossom arrangements, with lanterns and candles. White linens covered tables decorated with candles in gold lanterns, encircled by bright flowers and greenery. Gold chargers and gold chiavari chairs complemented the tabletops. The head table had a large floral arrangement that flowed over the table.

The bride and groom cut a five-tier lemon and vanilla cake with white fondant and gold ribbon fondant around each tier. It was topped with multi-colored flowers that formed a waterfall ending in a pool at the base. Jill enthused about the effect, “Kent killed it! It took my breath away.” The newlyweds enjoyed toasts from friends and loved ones that were hilarious and touching.

Guests were also seated outside on the veranda, overlooking the patio that had lights strung across its entire length. Perfect weather drew guests to the patio to enjoy the evening. The patio and veranda carried out the casual, party atmosphere the couple wanted. When the s’more kits were passed out, Jill and Josh were certain “s’more love” would result. Sure enough, Jill said, “Hearing how much fun people had at our wedding meant the most to us.”

The couple honeymooned at Playa Mujeres in Mexico for a week. They reside in Columbia, where Jill is a pharmacy tech at Flow’s Pharmacy and Josh is a mortgage secondary market administrator at Providence Bank.

Jill is the daughter of Ron and Grace Elder of Columbia, and Josh is the son of Mike and Joan Smith, also of Columbia.

A Quest for Comfort

Before the “I do”