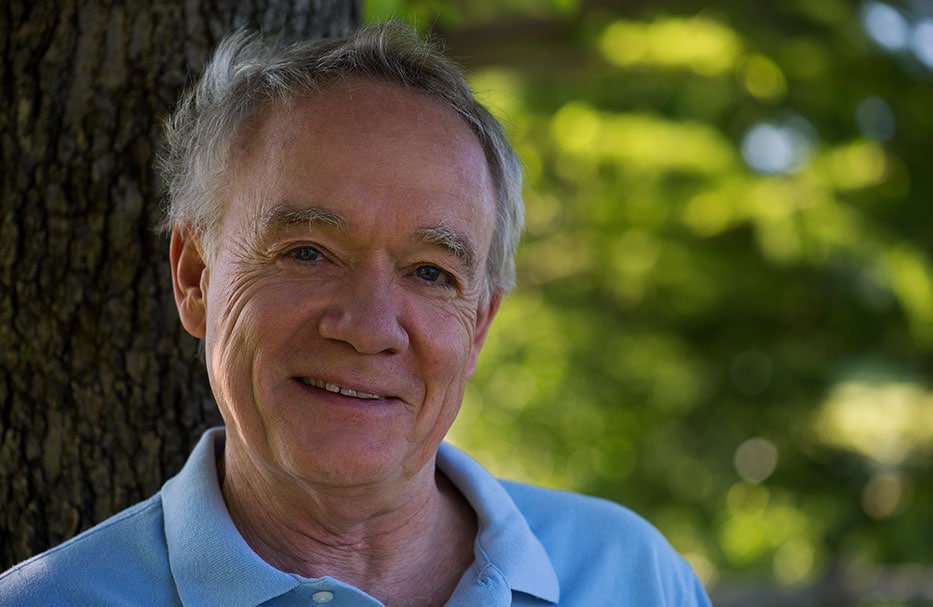 Columbia’s William (Bill) Claassen encapsulates a unique paradox of silence and volume. He speaks gently of yoga, meditation, monastic retreats and the therapeutic benefits of movement and dance. “I prefer silence,” says Claassen. Yet, energy and excitement shimmer on his face — even his silence is not so quiet.

Perhaps the volume of Claassen’s quietude is exactly why he is able to enjoy it. His life adventures around the world, his connection to the self and his passion for connection tangle into a tangible beauty that words never quite describe. Or perhaps, it takes the contrast of silence to balance his vibrant nature. Either way, his grasp on practiced silence fuels a personal peace, strength and clarity.

While Claassen treasures exquisite silence, words are his current trade tools. He writes with practiced skill. A graduate of the University of Missouri School of Journalism, he spent several years making a freelancer’s living. Then, fueled by a desire to make his own assignments, Claassen transitioned into the book world. With an array of life adventures to share, and always prepared to accumulate more, Claassen published four books along with a one-act play.

In his books “Alone in Community:  Journeys into Monastic Life Around the World,”  “Another World:  A Retreat in the Ozarks” and “Journey Man:  A World Calling,” Claassen covers a range of experiences and places, including time at a Trappist monastery in southern Missouri and a kibbutz in Israel.

Claassen’s July release, “RISKS:  A Memoir,” also discusses real life adventures, but his approach to the memoir was more personal. “This was more intimate, from a spiritual perspective, a sexual perspective, from a political perspective and from an artistic perspective,” he says. “I was able to share the opportunities I’ve had and also speak my piece.”

It is no surprise that just as fashion trends cycle back, the relevance of worldviews and political issues Claassen encountered with the Peace Corps and Volunteers in Service to America (VISTA) echo with relevancy today.

Specifically, Claassen shares adventures in Latin America where the primary need of those he encountered was sanctuary. “And now we are back to talking about sanctuary again,” Claassen says.

Avoiding instruction, Claassen leaves it to his readers to make the relevant connections. He shares the despair and human trials with a journalist’s careful hand, not overdramatized or showy, but with facts and highlighted moments of harsh reality.

In a similar matter-of-fact manner, Claassen shares his sexual journey. “It took a 10-year period from thinking I was heterosexual to calling myself gay,” he says. “It was not only my sexual evolution, but also what was going on in New York at that time.” Claassen shares his experiences in New York, both personal and as part of the stage acting community.

Covering a span of three significant decades, “RISKS” chronicles a story of identity and change, but is not a memoir about finding himself. Claassen says, “I always feel like myself. Every situation I went through, I felt that I was myself, not that everything was clear and things were not changing, but I felt like I have always been true to myself.”

“RISKS” is a story of all of the world travels, the moments close to home, the human interactions and the introspection that allowed Claassen to exist so fully. It is the story of Claassen’s foundation in service and human connection. “In service, people tend to work collectively, and I like that,” says Claassen.

From a high school experience at a Quaker work camp to service work abroad, he has continued a family history of involvement in unique service opportunities.

“My father’s people were Mennonites, they were pacifists and service was very important to them,” says Claassen. “I had an aunt and uncle who were very involved in the Civil Rights movement in the South.” In “RISKS,” readers watch the development of his service years, including time honoring his aunt and uncle as civil rights organizers in the South.

Join Claassen at the Daniel Boone Regional Library on Thursday, Sept. 14, at 7 p.m. for a reading and discussion of “RISKS.”

A Quest for Comfort