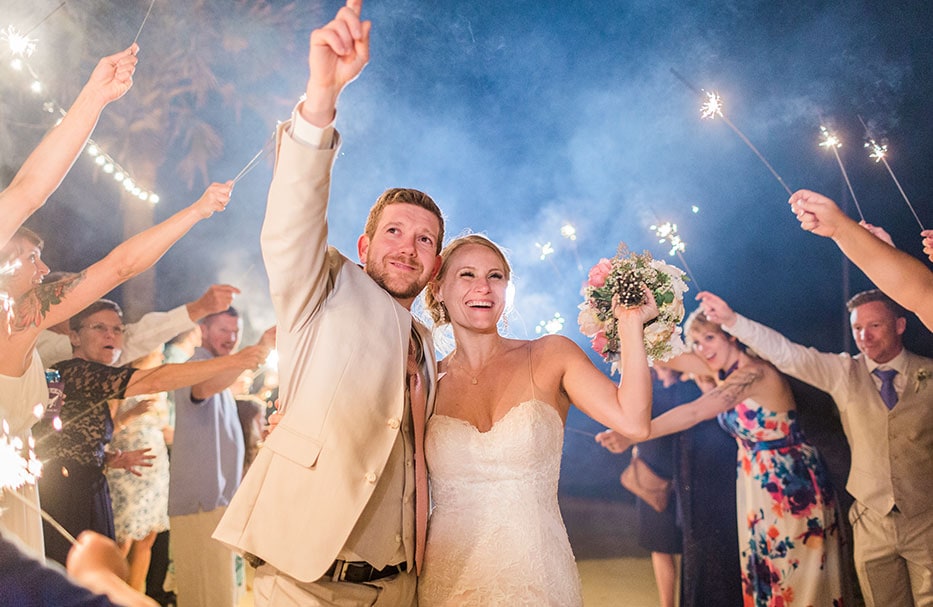 A calm ocean, smooth sand, flowers and lanterns leant a romantic vibe to the beach wedding of Arminta Phelps and Christopher Scrivner on April 23, 2016, in Oak Island, North Carolina.

The wedding was exactly three years after the couple first met at a restaurant where Chris was the general manager and Arminta and her mom were dining. They became engaged on Thanksgiving Day in 2014 after hosting a dinner for both families. After the feast, Chris proposed.

The couple opted for a “beachy chic” wedding, choosing pale succulents for the palette and décor. White lanterns and flowers lined the aisle between white chairs, culminating in a rustic beach arbor decorated with roses, succulents, greenery and sheer, ivory-colored fabric.

Arminta wore a fit-and-flare ivory Wren by Walters gown with a blush lining. The bodice was border lace lined in stretch satin and the skirt was made of soft netting. It had a sweetheart neck line, spaghetti straps and a sweep train. The bride also wore a blush veil with her hair swept up and to the side, crowned by a rose gold hair wreath. She carried a loose bouquet of blush and white roses, succulents and greenery.

Bridesmaids wore cocktail-length Alfred Angelo gowns made of chiffon, with V-necklines and white lace underlay on the bodice and full, gathered skirts. They carried white and blush roses.

The service was performed by Arminta’s close friend and colleague, Liz Stocks. Arminta and Chris wrote their vows and the ceremony script to be an intimate, personal exchange. Jackson helped them perform a glass ceremony, in which colored glass shards are poured together to symbolize unity, and later hand blown into a decorative bowl or vase.

The reception was held indoors near the beach. The room was uplit with blush and white lights, casting a romantic glow on the wedding party. Tables were decorated with the lanterns from the ceremony, ivory linens and blue napkins adorned with thank you notes to the guests. The couple cut a three-tiered, white textured cake decorated with blush roses and succulents.

The dance floor was highlighted with ceiling-to-floor chandeliers that guided friends and family to the dancing area, where almost all spent their evening. The sweetheart table was placed in front of a large window overlooking the ocean.

Chris said his favorite moment of the event was their “first look” under a nearby pier and “hearing her giggle as the wind was blowing her veil, and the time [we spent] with just us and her sister and my best friend while we were taking pictures.”

Arminta said the entire event was memorable. “We rented a house for a week and had 38 of our closest friends and family with us as we got ready through the week. We had the time of our lives. Our first look under the pier was special, and having my best friend to be the one to marry us. There might have been a pretty epic trolley ride back to the beach house after the reception!”

Arminta and Chris live in Columbia, where she is the owner of Achieve Balance Chiropractic and Chris is the office manager.
Arminta is the daughter of Gwendolen Carl and stepfather Ken Carl of Columbia. Chris is the son of Ronald and Betty Scrivner of Russellville.

Oh, The Many Things We Love About Columbia