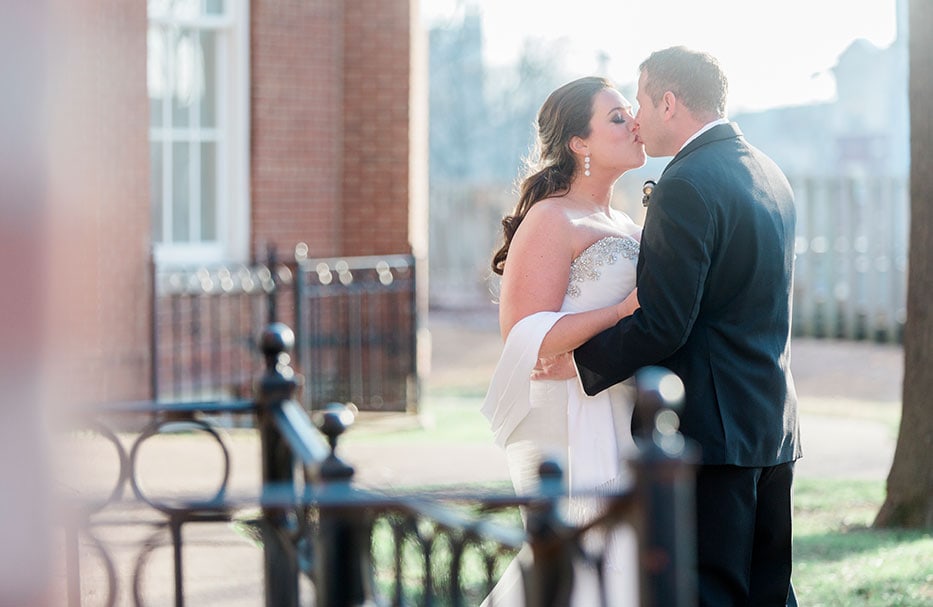 Megan Fewell and Corey Grant weren’t just counting down to a new year at midnight on Dec. 31, 2015. Surrounded by family and friends, they were counting down to the start of their lives together.

The couple met over tequila at the Tap House on August 20, 2011, introduced by their best friends, who were also dating. Fast forward to Dec. 18, 2014. The Christmas lights were beautiful and Corey, uncharacteristically, suggested a drive to admire them. He pulled over near the Magic Tree for photos. After they took a photo, he got down on one knee and proposed while Megan laughed with joy.

The wedding took place at Firestone Baars Chapel on Stephens College campus. Judi Schoonover, a family friend, officiated. Megan wore an ivory, strapless Morilee floor-length gown with a sweetheart neckline and beaded embellishments. A diamond tennis bracelet that had belonged to her grandmother graced her wrist and she wore diamond drop earrings that Corey purchased for her from McAdam’s for Christmas. Her hair was styled in a low ponytail held by a silver beaded clip. She carried white roses, hydrangeas and white button poms.

Bridesmaids wore long gold sequin gowns by Adrianna Papell that they selected themselves and carried white hydrangeas. The groom wore a simple black tuxedo. His boutonniere was a black, silver and gold noisemaker embellished with a tiny clock handmade by a family friend. His groomsmen dressed to match.

The wedding cake had four tiers: the first was a shimmery white almond poppy seed cake with buttercream frosting; the second was a white cake with raspberry filling; the third was chocolate decorated in gold and the fourth, which was saved by the couple for their first anniversary, was half chocolate and half almond poppy seed topped with a large gold “G.”

“Galaxy,” a seven-piece band from St. Louis, kept people dancing through the festivities. The first dance was very special to Megan. “Corey is such a wild dancer, so it was nice to slow things down a little bit and dance to a slow Motown song,” Megan said. “The toasts were also pretty special to us.  My dad and our best friends captured our lives and love perfectly.”

The countdown to midnight took place with the couple in the center of the dance floor as the people they loved and admired gathered around.

The couple honeymooned in Cancun, Mexico, for a week before returning to Columbia, where Megan is an equity consultant for the Office for Civil Rights & Title IX at Mizzou and Corey is an HVAC technician at Grant Heating and Air Conditioning.

Megan is the daughter of Jan and Kent Fewell of Columbia and Corey is the son of Sharon and Jerry Grant, also of Columbia.