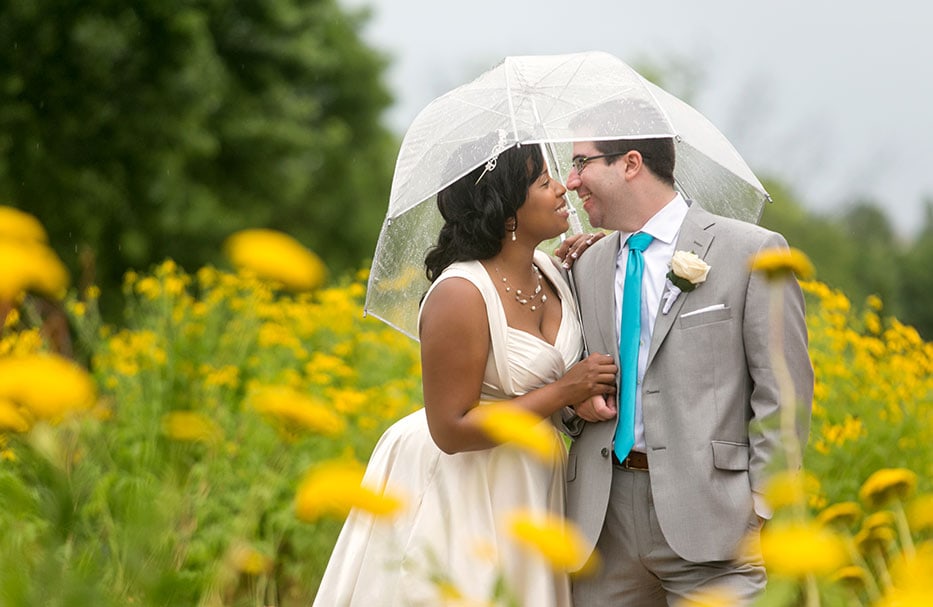 Toya Gray and Andrew Muscato were married June 26, 2016, in an outdoor ceremony under a chuppah (Jewish wedding canopy) at Les Bourgeois Vineyards. The outdoor setting and blooming flowers attracted a bee to the bride’s bouquet. The couple decided it was a sign they were “bee-loved.”

Gray and Muscato met at the Columbia Police Department, where the bride worked in records during the day and the groom was a patrolman with an overnight shift. “After I had been working there for the better part of a year, I asked to do a ride-along with an officer. Everyone I talked to suggested I ride with Andy,” recalled Toya. “I had trouble staying awake overnight, but wanted it to last as long as I could because I found him a lot of fun to be around.”

The feeling was mutual and the couple became engaged in August 2014 at the Cheshire Inn in St. Louis, an event accompanied by shopping for clothes and dinner at the landmark hotel.

The couple chose a Caribbean theme for their wedding based on a vacation to Saint Lucia in 2015. “We wanted colors that matched the clear, light blue waters, white sand and tropical flowers of the island,” Toya said.

She prepared for the big day with an overnight stay at Amber House Bed and Breakfast in Rocheport. “Andy arranged it so I would have a quiet place to relax and get myself ready the morning of the wedding,” Toya said. “The staff was accommodating and put me at ease.”

For the ceremony, Toya wore a strapless, hourglass-shaped Alfred Angelo gown with lace and beads. Her hair was curled and pinned up. She carried a bouquet of coral roses, calla lilies, hot pink and orange spray roses and seafoam green dusty millers. The bee loved the combination. “I think Toya was a bit afraid of the bee,” said Andy, “but she was a trouper and remained calm. It seemed to just want to enjoy the flowers.”
Bridesmaids wore coral and blue dresses from David’s Bridal and carried bouquets similar to the bride’s, minus the bee.

The groom was attired in a light gray wool-and-silk two-button suit from Jos. A Bank, with mahogany derby-style Cole Haan shoes and a teal-colored silk necktie. A white rose boutonniere with white stem wrap accented the suit. The groomsmen wore matching suits with coral ties and white roses with gray stem wraps.

Judge Gary Oxenhandler officiated at the ceremony overlooking the Missouri River. He had asked the bride and groom to each write a letter to him describing what they meant to each other. He read the results during the ceremony. “We got to hear the other’s letter for the first time,” Toya said. “We loved how they focused on being best friends first, loving each other in good times and bad, and being faithful to each other.”

Following Jewish tradition, Andy wore a yarmulke and broke a glass under the wedding chuppah at the end of the ceremony.

The reception was held at Reichmann Pavilion at Stephens Lake Park. It was decked out in the Caribbean colors of coral, teal and orange. Candles decorated the tables. A “Tropical Paradise” cake from HyVee served the guests. It was composed of three tiers with white butter crème frosting and ribbons that carried out the color scheme.

The couple’s first dance was to Stevie Wonder singing “Sunshine of My Life,” a song Toya had enjoyed as a child. It made her cry. “I had told her all the way up to the wedding that our first dance was going to be ‘At Last,’ so it caught her off guard when the DJ played Stevie Wonder instead,” said Andy. “He’s her favorite singer and I had taken her to a Stevie Wonder concert earlier in the year, so I thought it would be a nice touch.” Their daughter, Zohra, danced to “Purse First” by Bob the Drag Queen.

The couple escaped to Lake of the Ozarks after the reception, but traveled to Kauai, Hawaii, for their “official” honeymoon in the spring. They reside in Columbia, where Toya is a probation and parole officer for the Missouri Department of Corrections and Andrew is a domestic violence detective with the Columbia Police Department.

The bride is the daughter of Vanessa Bell of Denton, Texas, and the groom is the son of Joe and Mary Muscato of Columbia.