After 86 years of experiencing life, most of those spent as a Ph.D. entomologist, Richard has developed an extensive understanding of monarch butterflies and a commitment to making a place for them in the world. At an age when most people are content to let others tackle serious problems and projects, he is developing a monarch butterfly sanctuary garden and nature area at Provision Living in Columbia, where he lives with his wife, Margaret.

It’s important work. Monarchs are running out of habitat, and as a result, their numbers are dwindling. Today, there are 80 percent fewer monarchs than there were in the 1990s, according to Monarch conservation groups. Although monarch butterflies drink nectar from a variety of wildflowers, they will only lay their eggs on milkweed plants, and monarch caterpillars can only survive by eating milkweed leaves. The modern world, with its pesticides and parking lots, has become an inhospitable place for butterflies.

So, is Richard developing the monarch butterfly sanctuary because of his devotion to this beautiful insect and the environment? Certainly, that figures into his motivation, but his involvement with monarchs is also part of a longtime hobby he shared with Margaret. For the past decade, until their move last year to Provision Living, the couple shared an enjoyment of butterflies, raising monarchs through their entire lifecycle: from eggs to caterpillars to chrysalis, until they emerged as colorful adults. Once the butterflies unfolded their wings, they would set them free to continue their species’ incredible 2,500-mile migration from Mexico to Canada and back. For the sake of butterflies, they turned their Columbia backyard into a feasting area for monarchs by planting and cultivating about 300 milkweed plants. 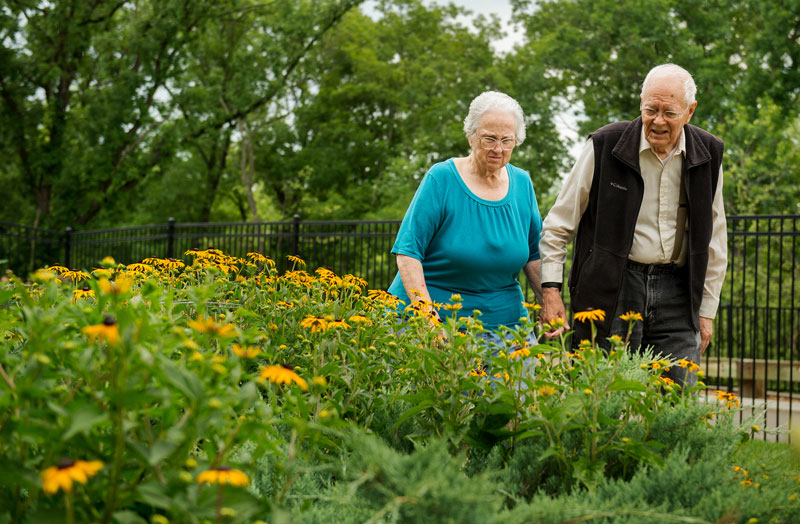 Margaret, who had a keen ability to spot monarch eggs, nudged Richard toward raising the butterflies. “What we found in our backyard was that when a storm came it killed almost all the caterpillars. Margaret would sigh, then she’d get out her rearing box and go out and pick them off. Of every 10 that we raised from eggs, Margaret found nine of them,” Richard says as he smiles at the memory.

The family memories that Richard shares are good ones, of the days before Margaret had been diagnosed with Alzheimer’s and before the disease had changed both their lives. As the disease progressed, she lost the ability to take care of herself. Just as the butterflies need a sanctuary to survive, Margaret needs the sheltered world she and Richard now live in at Provision Living in Columbia. For the past year and a half, the couple has lived in a studio apartment in the memory care section of this assisted living community.

On some days, when his back problems flare up, Richard walks with stooped shoulders. Even so, there’s something youthful and eager about his demeanor. Maybe it’s the ease with which he smiles or the quiet intelligence behind his gaze. Despite his physical discomfort and his wife’s limitations, he maintains a cheerful attitude. Approaching his ninth decade, he is articulate and thoughtful – committed to his wife’s care and comfort as well as to the development of the monarch butterfly sanctuary.

“It’s a project that Dr. Hart has orchestrated,” says Denise Falco, community resources manager at Provision Living. (She prefers using his formal title, in deference to the doctorate he earned at the University of Missouri – Columbia.) “He’s the one who brought this project to life with his love and passion. He’s an amazing man.”

Butterflies aren’t the only beneficiaries of Richard’s work. “He’s got the memory care residents and some of their family members involved,” Falco says. “They’ve potted the milkweed plants in the patio garden. This fall, they’ll dig them up and transplant them to the butterfly sanctuary. In spring 2018, we’ll actually see milkweed flowers.”
Richard might not possess the secret of staying vital and energetic for more than 86 years, but he certainly embodies it. “At this stage of life your goal is to be happy each day,” he says. It’s a goal he works to achieve for himself and Margaret.
In the quiet moments at Provision Living, Richard maintains and publishes a blog, http://residentialcarefortwo.blogspot.com/. One of his blog entries explains what’s behind his remarkable capacity to adapt to difficult circumstances. In the entry, he considers the difficulties another man is having with the changes that Alzheimer’s has brought to his own wife. 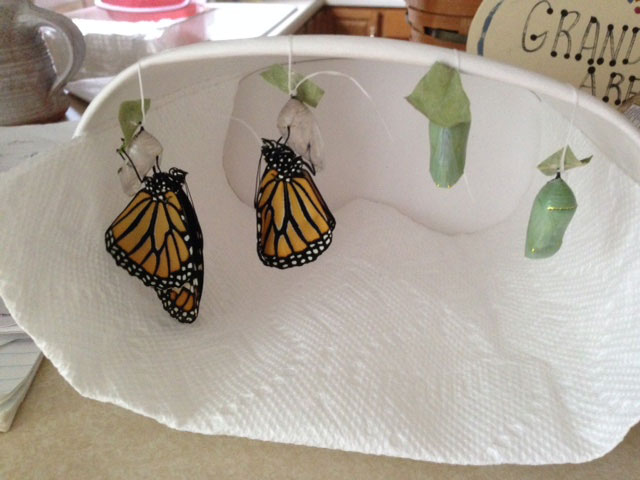 “He must stop relating his wife’s behavior to past behavior. He needs to attend to what will make her a happy day, today and tomorrow. She is who she is today. And that is hard to accept, if you are continuing to compare now with the past or what might have been. It can promote grieving each day rather than enjoying each day or part of day. He must also find things to occupy his own mind and physical needs so that he can continue to share an apartment with his wife.”

Raised on a family farm in Iowa, Richard tempers his keen observation of nature with a religious reverence for life on Earth. He retired about 27 years ago from Northwest Missouri University State, where he taught a generation of students about insects and the environment. Throughout much of his retirement, he did occasional consulting and continued work on software he developed for improving the scoring of multiple-choice tests.

Most of Richard’s and Margaret’s years in Columbia were spent in good health. They enjoyed a pleasant retirement, traveled a bit, made trips to see their three grown children, their six grandchildren and their two great-grandchildren. But Margaret’s Alzheimer’s disease kept progressing. Until a few years ago, Richard relied on a home health agency to provide the care Margaret needed to stay at their home. Eventually, he came to the realization that if something happened to him, he would be unable to care for Margaret. He researched his options, analyzed the pluses and minuses of various assisted living centers, compared those on a spreadsheet, then decided on Provision Living at Columbia.

“Here, in memory care, it’s really a family, like having all your aunts and uncles,” Richard says. “We’ll just say there’s 20 kids in this family.” 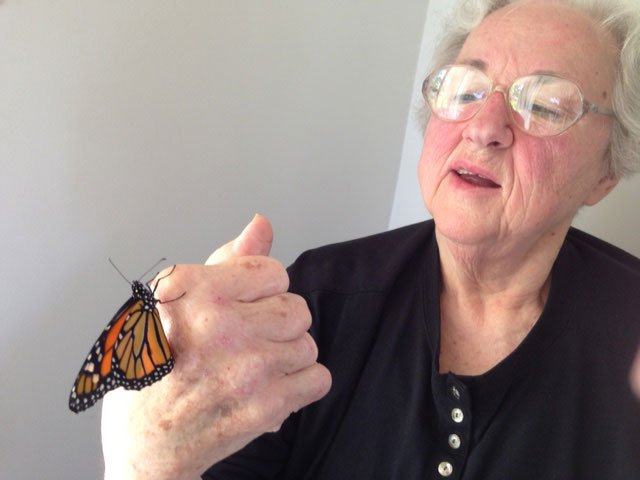 Unlike the other studio apartments in the memory care section, Richard’s and Margaret’s houses an office area with a computer for Richard’s use. He blogs fairly regularly about a wide range of topics and conducts Internet research on his main interests, entomology and educational testing. From his office chair, Richard can look out the ground-floor window and keep an eye on the small raised-bed flower garden that he is tending. The garden features bright yellow marigolds and six thriving milkweed plants, provided by a relative of one of the memory care residents.

Eventually, Margaret and he will be able to look out the window and watch monarch butterflies flutter and feed. It won’t be like the old days, when they would collect monarch eggs together from their home’s backyard flower garden; but Margaret, who lives in the present moment only, still enjoys the simple pleasure of watching butterflies.

Their raised-bed garden is only a fraction of the size of the monarch butterfly sanctuary garden, visible across the street from their studio apartment. The sanctuary, which has already been seeded, occupies the western slope of an acre-and a-half hill. Initially, Richard had planned on covering the entire area with a thick growth of milkweed plants, but the plan grew more ambitious after he consulted with Danielle Fox, the community conservationist for Columbia’s office of sustainability.

“It went from an idea of just raising milkweed plants to feed butterflies that he would raise inside, to restoring this hillside to become a naturalized area,” Fox says. “From there it just all blossomed.” 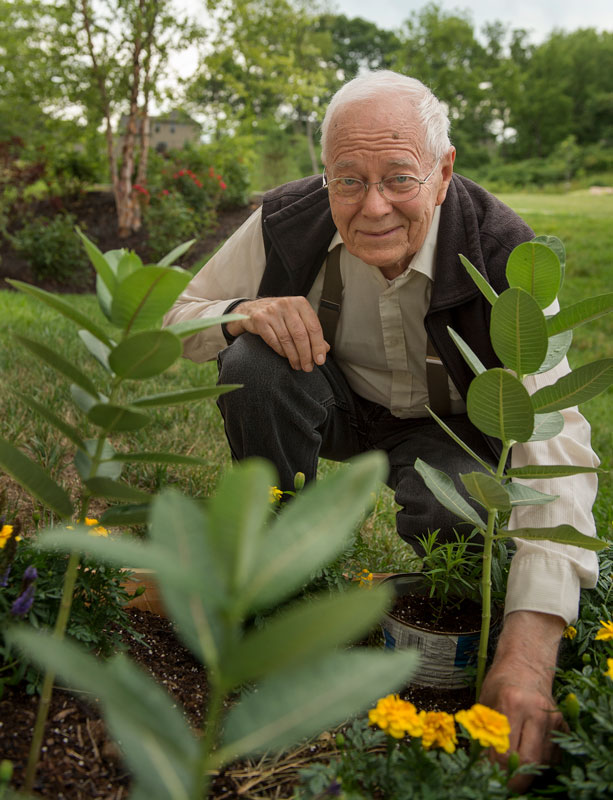 Provision Living staff found a landscape contractor who could seed the area and paid him to plant 22 different species of native plants. Meanwhile Fox provided three different types of milkweed plants, the ones that the memory care residents potted into containers. The milkweeds are maturing in a patio garden that opens to the memory care unit.

The group effort – initiated by Richard and supported by Provision Living and some of the residents and their family members – is changing what was once a minor hill overlooking an assisted living center into a waystation for migrating monarchs. “Our goal is to create on the hillside a supply of milkweed that will support the butterflies and caterpillars they’ll be raising indoors. When we release the butterflies, it will become a self-sustaining project, helping not just the monarchs but other pollinator species,” Fox explains.

As impressed as Fox is by Richard’s professional knowledge of insects, she is more impressed by his personality. “He is one of the sweetest people I’ve ever met. He’s extremely passionate and wanted to do this the right way,” she says.

Richard is an 86-year-old who brings old-fashioned ideals and virtues into a modern world. Whether it’s caring for monarchs or seeing his wife through a tough day, Richard remains true to his ideals.

“Really,” he says, “We need to take better care of the world.”

Women On The Move