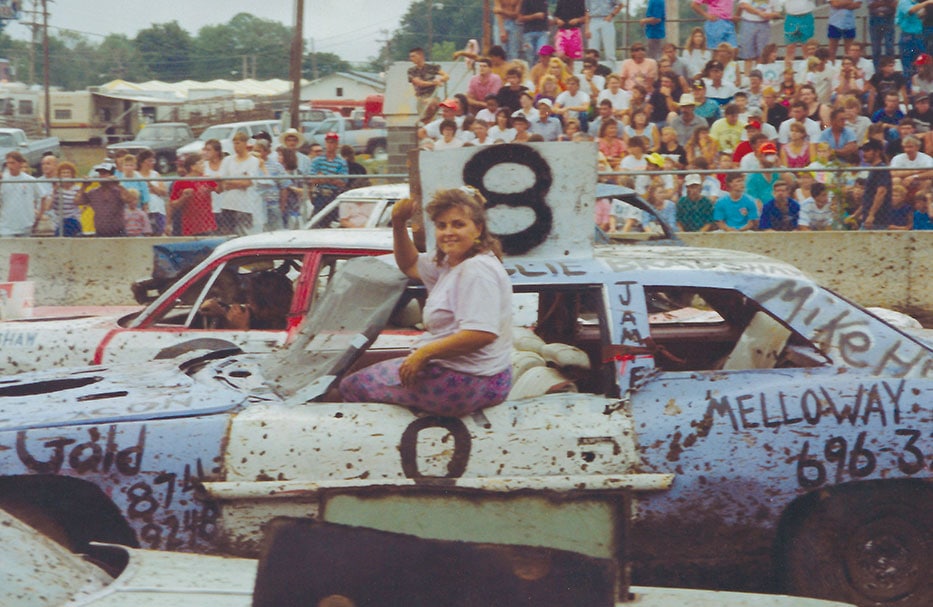 Leslie Bradshaw-Dingell comes from a family of racers, so it’s no wonder she drove in her first powder puff derby at the age of 15 and went on to build her first car soon afterward. It was a Ford Torino and she won first place. “I never raced in the powder puff derbies after that,” she said. “I always raced with the men.”

Demolition derbies were so much a part of her life she couldn’t understand why her husband questioned her devotion to the sport. “He said, ‘Why would you want to take perfectly good cars and crash them into each other?’ But then he went to a derby and was caught — hook, line and sinker.” Now her husband helps build engines for her cars. She’s had more than 100.

Demolition derby cars may look beat up but they are, in fact, carefully crafted to withstand high-speed crashes. The hood is bolted down and the trunk welded shut. The interior is stripped of all flammable material and a roll cage is installed for safety. All glass and chrome are removed, as well as plastic components and the muffler and exhaust. Leslie uses a fuel cell instead of a gas tank so the flow of gas shuts off in case of a crash. She puts a rubber mat over the battery after one exploded on her. Engines are souped up for power and speed. 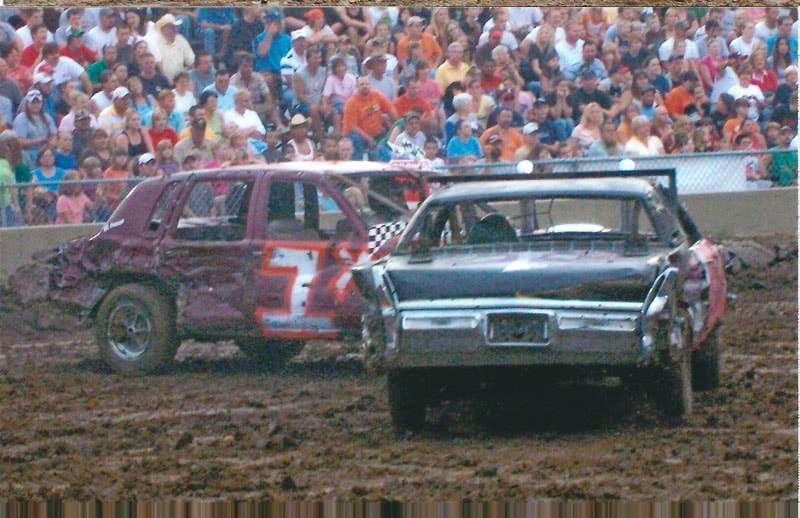 She applies what she’s learned from building cars to the racetrack. “There are points on cars you know are vulnerable, so you try to aim for them. Take out their wheels, batteries, fuel lines, axles, anything to disable them all the while hoping your drive shaft doesn’t come out. Sometimes it’s skill and knowledge, sometimes it’s just luck.”

For Leslie, the attraction of racing is innate. “As soon as I hear an engine start, my adrenaline is going,” she said. She was 13 when she first experienced the thrill of high speed, clocking in at 117 miles per hour in a Twister speedboat with a 350 cc engine.

Her daring-do was notorious on the race circuit. When she flipped sideways in her first mud run, a competitor asked, “You’re not afraid of anything, are you?” She’s seen bad crashes — fatalities, even — and now, at age 48 and after many injuries, she puts safety first, “while still having fun,” she’s quick to add.

Leslie knows having loved ones in danger is the scariest part of racing. She remembers seeing her father get hit in a race and wondering whether he would come out alive. She’s helping her granddaughter and a niece and nephew get into racing, and she enjoys participating in charity races. She paid tribute to her dad, who recently died of cancer, by racing a Derby Car for Cancer that featured survivors and loved ones lost to cancer. The money she raised through sponsorships went to the cancer fund of the Eagles Auxiliary.

Leslie has worked as a hairdresser and bus driver, and though she often wins money at races, it gets plowed right back into her hobby. “I don’t care if I win. I just love to race.”

Score the Winning Point in a High Stakes Game