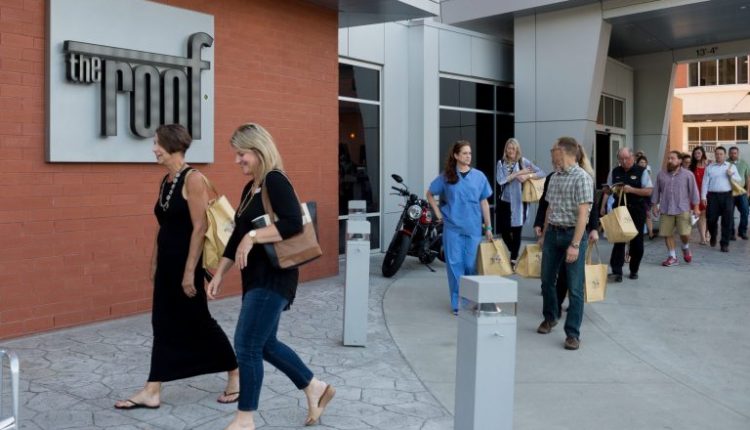 On May 30, Inside Columbia partnered with Columbia Culinary Tours for a special guided walking tour of some of Columbia’s finest eateries. The tour was sponsored by the Missouri Beef Industry Council, and nearly 30 diners hungering for a fun gustatory experience took part.

After meeting up at The Broadway, the two tour groups set off. Inside Columbia’s editorial staff was part of group I, and our first stop was Umbria. (Sadly, since closed.)

Throughout the tour, our guide Kerry peppered the evening with interesting historical tidbits about Columbia, much to the enjoyment of the participants.

Upon arriving at Umbria, we were ushered into a rustic room in the back for a delicious dinner of rare beef tenderloin covered in a savory tomato-based sauce. It was served with lobster and crab filled raviolis topped with fresh parmesan cheese, and paired with a refreshing flute of champagne.

Stop two was the Craft Beer Cellar, bustling with business on one of its popular Trivia Tuesdays. Again, we were ushered into a back room where we were greeted by the owners of the Cellar, as well as Como Smoke & Fire. We dined on a beautifully barbecued smoked turkey breast sandwich, topped with a tart pickle and coleslaw. It was accompanied by a side of perfectly prepared roasted vegetables. A nice cold ale was the perfect complement.

Next we were off to the Broadway Brewery, where we enjoyed a hearty portion of meatloaf, mashed potatoes and green beans. The savory goodness of the meal was offset perfectly by a generous pour of Boone County Brown ale.

Finally, both tour groups concluded their respective tours at The Roof, where we enjoyed a specially prepared craft cocktail, along with a sinfully rich sampling of Osso Bucco,

The consensus on the evening was overwhelmingly positive. Many guests remarked on the ample portions that were served, and said they enjoyed the fact that the chefs were on hand to personally describe what they had prepared. It was a unique opportunity to get a taste of what Columbia’s vibrant culinary scene has to offer.

If all goes as planned, more tours will be offered in the future. Stay tuned and bon appetite!