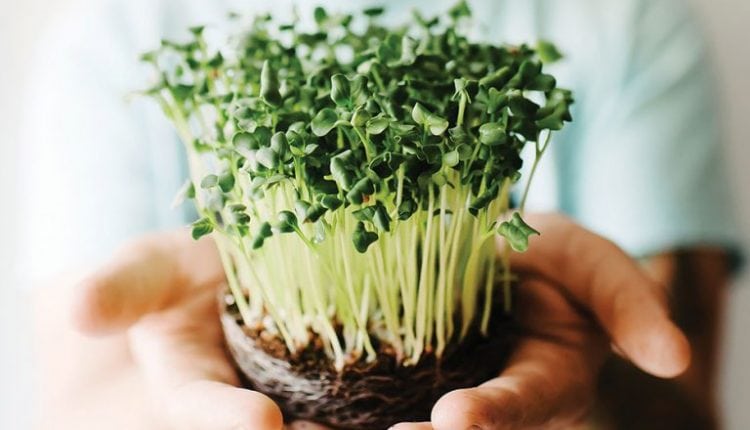 On occasion both tables display a small selection of other produce; lettuce to make a salad to highlight the micro greens or green beans to serve in a skillet alongside the oyster mushrooms. The primary niche market for both, though, is clear. 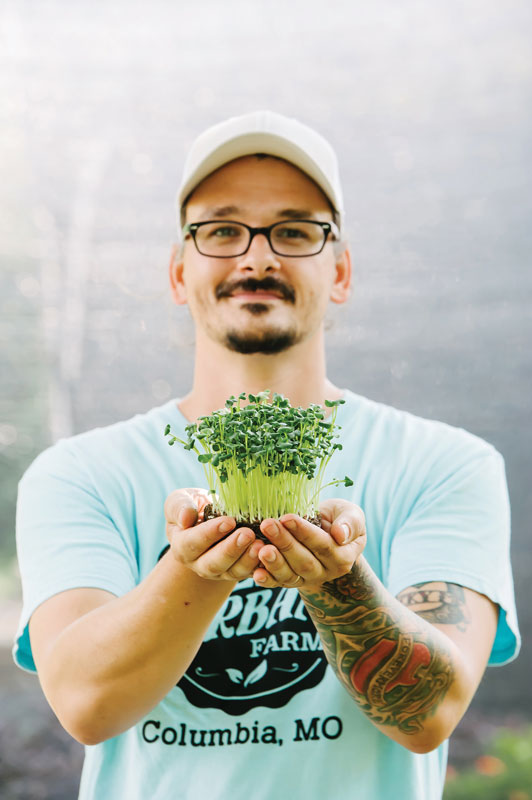 Hubert Shaw and two of his sons, Nathan and Christopher, began growing oyster mushrooms out of curiosity. “We got into growing oyster mushrooms because Nathan had experimented with them and found them interesting,” says Shaw. “They ended up intriguing all of us because of the complexity of growing them. We set out on the adventure to see if we could conquer the challenge.”

Shaw works for the University of Missouri on the campus side of things, while both Nathan and Christopher work on the hospital side. The Grow Bros Natural Farmers are based in Sturgeon, where they hope to continue to expand into other mushrooms including Shitake, portabella and button mushrooms. Shaw says, “One day soon we plan on this being a full-time business for all of us as we expand and produce more varieties and a larger amount of mushrooms.”

They began growing the mushrooms about two years ago, but expanded their efforts in the last year. Their product can be found at several farmers markets in Missouri, from Kansas City to Washington. The Grow Bros Natural Farmers also sell their mushrooms directly to a variety of restaurants and catering companies.

Oyster mushrooms are versatile, with a milder flavor than some specialty mushrooms. They hold up well in soups or sautéed, though Nathan’s favorite preparation is grilled alongside fresh asparagus.

The mushrooms require a different sort of attention from other Missouri produce.

“We take the grains after they’ve been sterilized and inoculated with the mycelium and when fully colonized, mix it with straw and pack it in plastic tubes to make straw logs,” says Shaw. “Next we poke holes in the bags with arrowheads and put them on shelves to pin and produce mushrooms. We grow them in Christopher’s garage that is sealed tight so we can control the temperature and the humidity level.”

Christopher’s garage is filled with bags stacked neatly on custom-built wooden shelves. The bags are in various stages of growth to ensure a steady supply, a range from zero growth to the bags disappearing under the elaborately layered frills of the oyster mushrooms.

More information about their mushrooms can be found on www.facebook.com/TheGrowBrosNaturalFarmers.

Seth Allen of LP Urban Farm sells nutrient dense microgreens. There is a wide variety: robust sunflower, tangy kohlrabi, heady herbs, spicy radishes and more. “We get to grow lots of cool varieties that have a range of flavor, texture and color,” Allen says.

The visual appeal is certainly one of the major customer draws. At the Columbia Farmers Market, people stop because they are intrigued by the unique little plants. Allen sells individual types alongside custom-made mixes, all suited to various dishes and personal palettes.

“Everybody asks me what to do with the microgreens,” says Allen. “A lot of people view microgreens as an accessory, but there are all kinds of exciting things you can do.” He enjoys sharing ideas with regulars and new customers alike at his market table.

Most people are more familiar with sprouts. “Nutritionally there is probably not a whole lot of difference between a sprout and a microgreen of the same variety,” Allen says. “The nutrition packed in the seed is intended to feed that plant for a while and when you eat a sprout or a microgreen you capture all of that nutrition.” 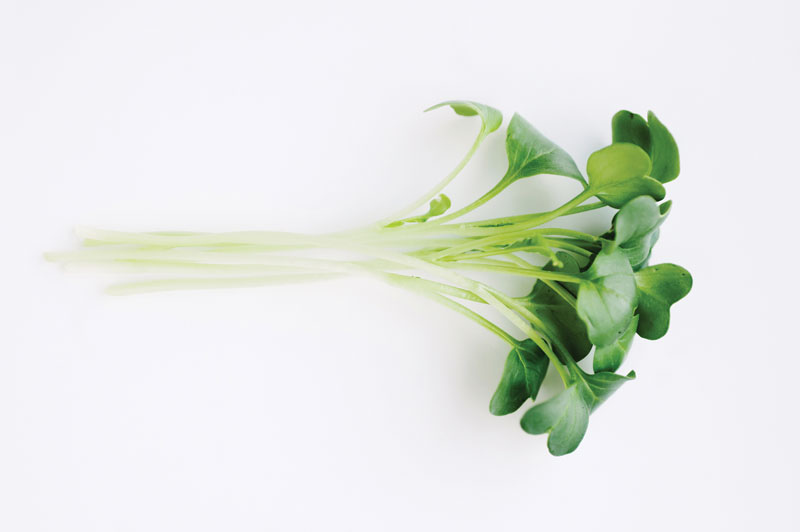 “Microgreens are a little bigger and have a lot more flavor,” says Allen. The microgreens are essentially the stage after a sprout. They are 1- to 2-inches long and include the stem and first set of leaves (cotyledon), but no roots. Because microgreens are clipped above the soil growth, they are not at risk for some of the bacteria issues that sprouts are susceptible to. To maximize his plants, Allen seeds his plants directly on top of the soil. They have high nutrient demands from the soil, so every tray gets a fresh batch.

The Allen family’s small backyard is evolving with hills formed from discarded microgreen soil. Heads of lettuce and edible flowers peek through landscaping fabric alongside the purple leaves of Japanese Shiso, a unique liquorish/citrusy herb that is excellent for pickling. The outside produce is definitely not the primary focus of Allen’s energy.

Inside, he keeps track of the daily needs of the microgreens on a large chart on the wall inside the garage. Similar to Christopher’s garage, Allen has converted the garage with towers of shelves, which are filled with trays in various stages of growth. Lights are mounted on each shelf, allowing control of light and increased warmth. Up high, recently seeded trays are stacked tightly, with young seedlings pushing ever upward.

After 9 years working at a computer screen in a cubicle, Seth Allen makes it clear that he loves his new urban farm life. “I was really ready to do something else,” Allen says. “I find joy in growing small things. We researched ways I could make a job and a living doing that.”

Allen and his wife, Rebecca, knew that they had no intention of moving their family of four. “There is a pretty classic model of small market gardens. We were not in a position to move and we didn’t really want to increase our debt load to start a business,” says Allen. “We started looking at our limitations and how we could turn them into an opportunity.”

While Allen wanted a smart growth model for his business to eliminate debt, space was the primary limitation. “Microgreens are really labor intensive,” Allen says. “Other farmers who do much larger things don’t have the time to mess with microgreens. That was our in.”

Allen was prepared to invest all of his time in developing the microgreen market and he knew he could find space for the tiny plants. “That’s kind of the challenge and the beauty of the urban farm,” says Allen. “We don’t have the space to grow watermelons or pumpkins. We have to grow really small things.”

A little more than a year after testing his product on friends and family and an early test Community Supported Agriculture share program (CSA) with only seven members, Allen now has steady business with restaurants including Main Squeeze and Kampai, catering companies, the Columbia Farmers Market and his mini-CSA program.
Since microgreens do not have a defined season, Allen offers six-week CSA subscriptions followed by a week off so he can reset. “A week off gives customers a bit of a change,” says Allen, “and they remember what they are missing.”
When talking about an extremely small and lightweight product, Allen’s success is apparent. “We produce around 20 pounds of micros each week,” Allen says. “We are on track for 1,000 pounds this year.”

All The Right Moves