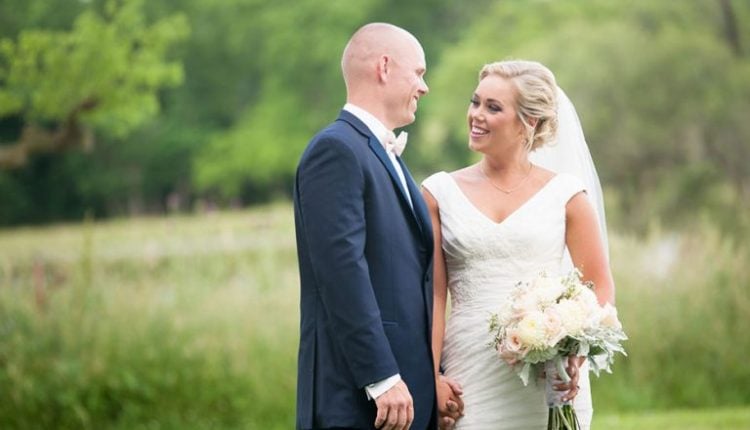 They Hit It Out of the Park

Brianne Bond and Piper Graves exchanged wedding vows June 4, 2016, at Blue Bell Farm in Fayette. They both attended Rock Bridge High School but did not become acquainted until college when a mutual friend introduced them.

In December 2014, they attended a family get-together at Brianne’s family farm near Lebanon, where she was excited to see relatives visiting from Georgia. No sooner had they arrived, though, when Piper insisted they take a walk. Mysteriously, Brianne’s relatives encouraged her to go. They arrived at a scenic fishing pond where Piper got down on one knee and proposed. The newly engaged couple then walked to the barn where Brianne’s whole family had gathered under a banner congratulating them. It was a set-up, but Brianne was thrilled.

Brianne and her mother started planning the wedding decor the day after the couple became engaged. First, Brianne scrapped the Power-point she had made of her dream wedding from when she was in middle school. That left her with more options and she ultimately followed the lead of her groom, who chose his favorite color as the basis of the palette: pink.

On her wedding day she wore a white full-length trumpet-style dress with an off-the-shoulder neckline. It was made of lace and tulle with beaded accents on the hip and neckline. Her veil was borrowed from her brother’s wife. For jewelry she chose pink and gold earrings that belonged to her mother-in-law and a gold diamond necklace that had belonged to her late grandmother. Her hair was arranged in an up-do with a pearl and beaded hair comb. She carried Anna roses, white hydrangeas, and white football mums against a background of dusty moss greenery. The stem of the bouquet was wrapped in lace from her mother’s wedding dress.

Piper and his brother built a wooden cross to decorate the altar, which was enhanced with greenery and flowers. The first three rows of seating were made up of antique church pews which had been painted and re-covered to seat family and close friends. The remainder of the seating was provided by white chairs. The aisle was lined with vases full of hydrangeas hanging from shepherds’ hooks.

Judge Mark Pfeiffer officiated at the ceremony. “Mark was one of my best friend’s fathers and also Piper’s Little League baseball coach,” Brianne said. “Mark and his wife Tracey went to great lengths to provide premarital counseling for us and make the ceremony very personal.” Just prior to the ceremony, Judge Pfeiffer presented Piper with an old Little League scorecard listing him as the starting pitcher “for good luck.” The judge peppered the proceedings with baseball analogies before asking the bride and groom to exchange traditional vows. After they said, “I do,” all the guests blew bubbles as they walked back down the aisle.

The groom then picked up the bride and swung her in a perfect circle without dropping her — a grand slam finish to the ceremony.

The wedding reception was held in the Blue Bell Farms barn that let in a lot of natural light to accentuate the vintage crystal candlesticks and vases on each table. Flowers draped from the vases onto pink tulle table runners. Each guest’s place setting had a gold charger and flatware wrapped in a white napkin and a greeting from the bride and groom. Brianne made all the signs for the ceremony and reception, using an antique door, windows and gold picture frames. Antique suitcases and tables were used to decorate the trail mix bar and guest book table.

The couple cut a three-tiered white cake with buttercream icing. The bottom and top tiers were covered in pink buttercream rosettes. It was accompanied by a strawberry sheet cake with whipped frosting.

The father-daughter dance highlighted the reception. “My father is NOT a dancer,” Brianne said. “But he insisted we surprise the whole wedding with a mash up dance. We worked for weeks and surprised everyone with a goofy mix of break dancing, line dancing and more.”

Brianne started graduate school two days after the wedding, so they postponed a honeymoon in hopes of combining it one day with a graduation celebration.

The couple lives in Columbia where Brianne is studying to be a speech pathologist and Piper works in his family’s business, Graves Menu Maker Foods.

Brianne is the daughter of David and Becky Bond of Columbia. Piper is the son of Dick and Tracy Graves, also of Columbia.