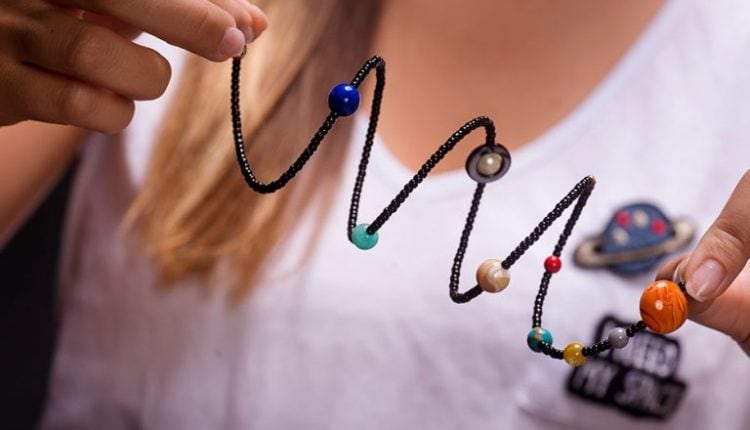 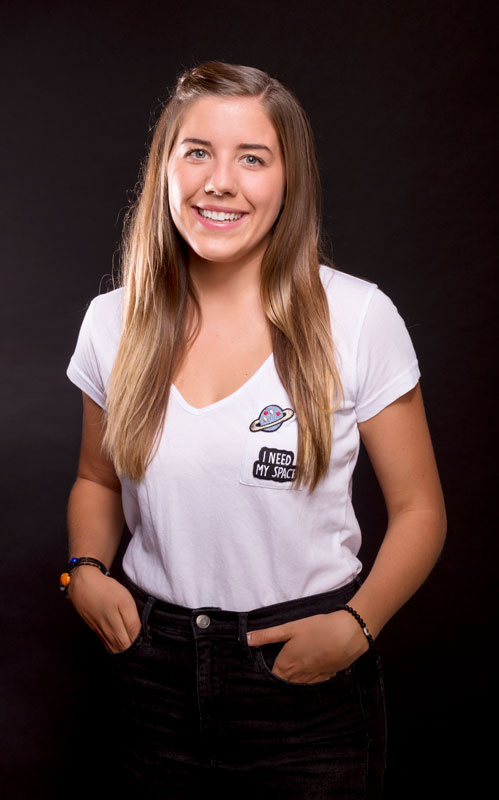 It’s been said that the entire universe is contained in a single atom, but for Bea Doheny, the weight and wonder of the cosmos can be found on her wrist instead. As the owner and founder of the jewelry line AstronoBEAds, Doheny sits at the intersection of many realms: fashion and science, student and entrepreneur, astronomy and art, connecting worlds and people together in ways she never imagined, all with the power of the beads she threads together.

“It’s so much bigger than just a bracelet,” Doheny says of her jewelry line. “I’m really fascinated with astronomy and all of the mysteries of space, and I also love expressing myself through art projects. With both my curiosity and creativity, the possibilities are endless.”

Doheny, a senior business marketing major at the University of Missouri, has been interested in the wonder of the cosmos and in art since she was growing up in St. Louis. “I’ve been creating things through art for as long as I can remember,” she explains, “and I’ve always wondered what lies beyond earth out there.”

It was 2014 when Doheny first had the idea to fuse her passions of science and art together, as solar system bracelets for her friends’ high school graduation gifts. “I wrote a note (attached to the bracelets) that said, ‘Whenever you look down at your solar system bracelet, remember I think you’re out of this world.’”

Doheny enjoyed the process of creating jewelry that packs a powerful message, and so she continued creating astronomy-themed jewelry for her friends and family. It wasn’t until her sophomore year at MU that she had the idea to turn her hobby into a business, citing her younger brother as the inspiration behind the name AstronoBEAds — a name that combines both her passions and her first name. At that moment, it all clicked.

“It was then that I said, ‘I can do something with this. I can make my own website and share it with more people out there,’” she says.
With the tremendous help of her professors, mentors and friends, Doheny built AstronoBEAds’ website and social media accounts, attended conferences, and pitched her business to MU’s Entrepreneurship Alliance. “People are so giving of their advice and wisdom,” she says.

“Everyone knows you’re just learning (in college), so I was able to learn a lot from our community, and how to make this idea into a reality.”
AstronoBEAds officially launched on April 22, 2016 — fittingly, Earth Day. “I felt ‘lift-off’ after my launch,” she says. “I had over 200 shares on my website all over social media, and the positive responses were absolutely incredible.” Soon, Doheny had orders from all over the world, receiving messages from people from Poland and Brazil and Australia who loved the vision and universal appeal behind her beads. 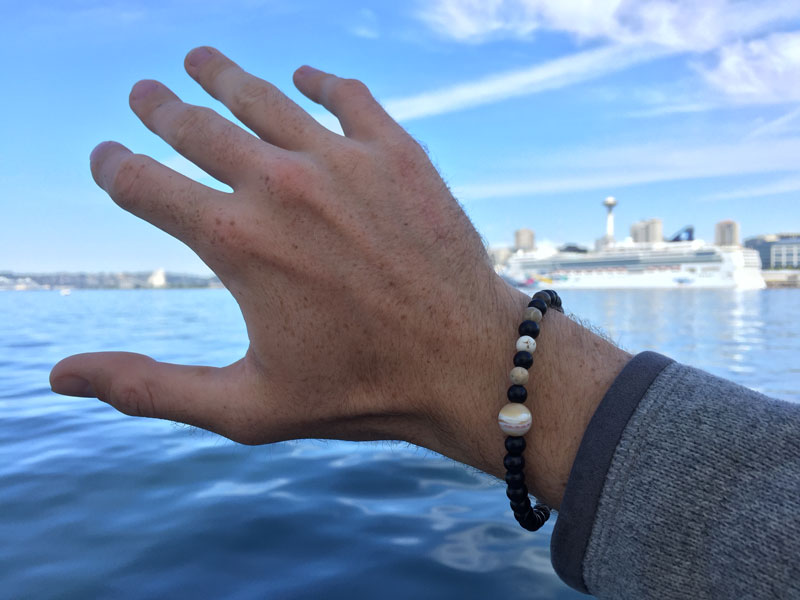 To accommodate her growth and send orders more efficiently, Doheny was able to find workspace in the MU Student Center, where she also sells her jewelry. Within six months of her launch date, she was taking applications from fellow students to help with the beading and shipping process, forming what she calls her AstronoTeam.

It’s not all easy, of course: Doheny admits that being a student entrepreneur can be challenging. “It’s an ongoing battle of balance,” she says, explaining it’s sometimes hard to navigate beading, homework and social life. “I’ve learned so much this past year about what it takes to run a business, and I’ve learned a lot about myself.”

Her collection of bracelets and necklaces are all inspired by different galactic elements, and each carry a different message. The Galaxy Choker inspires wearers to “Stay Curious,” while the Pale Blue Dot necklace and its tiny blue dot reminds wearers of earth’s small place in the universe. The Pluto Choker is apt for “all the movers, shakers, and individuals who dare to be different,” and the Galilean Moons Bracelet prompts wearers to “question everything” and “hold room for discovery.”

“The thing I love about my jewelry is each product holds a message behind it,” she explains. “They’re neat cosmic perspectives that are really great conversation starters. It’s a fabulous learning tool for pointing out the planets to others, and it’s super stylish … what cooler thing could you be wearing on your wrist than a solar system?” 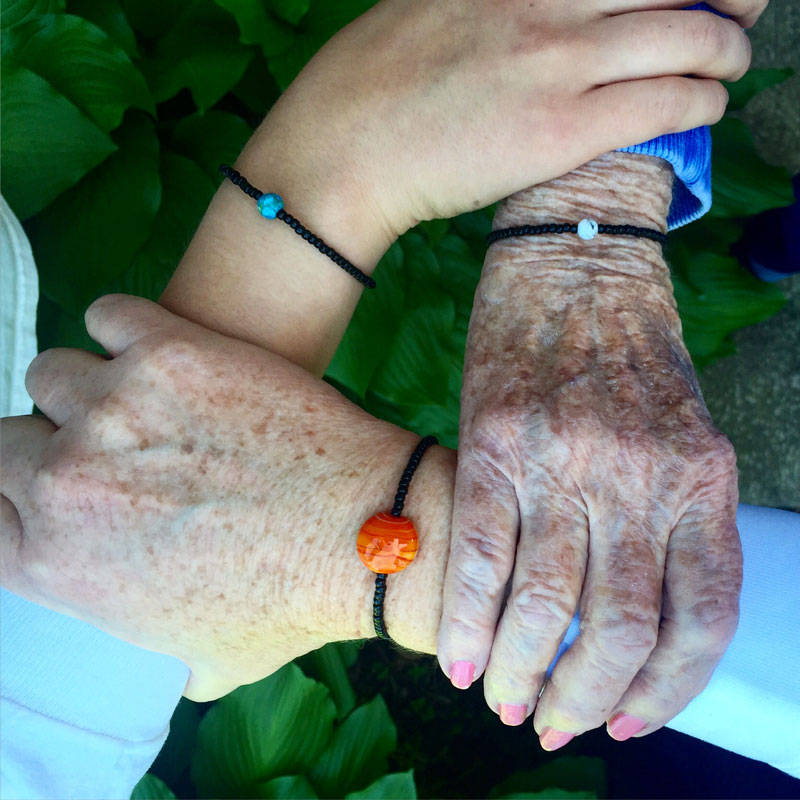 Combining fashion and science — two realms that tend to occupy different galaxies, here on earth — is quite a feat, but Doheny has navigated these disparate realms in stride. She provides a rare connecting link between astronomy superstars and fashionistas.

A few faith-fueled emails to her astronomy idols merged these worlds even more.

Before she knew it, astrophysicist superstar Neil deGrasse Tyson was wearing one of her bracelets. So was Aomawa Shields, an astronomer and astrobiologist whom Doheny admires for her work with Rising Stargirls, an organization that encourages girls to discover the wonders of the cosmos. AstronoBEAds has also been featured on Tyson’s StarTalk Radio Show, a science, pop culture and comedy show, reaching an ever-growing audience.

As for the future, Doheny plans to graduate from MU in 2018 and continue expanding AstronoBEAds. To date, Doheny has sold more than 4,000 pieces in over 31 countries, and has more than 6,000 Instagram followers, making connections the globe over.

“I love how connecting astronomy is,” she says. “It doesn’t matter what you believe, where you are, or what language you speak. It really connects and unites us all.”

Zen and the Art of Compost Maintenance