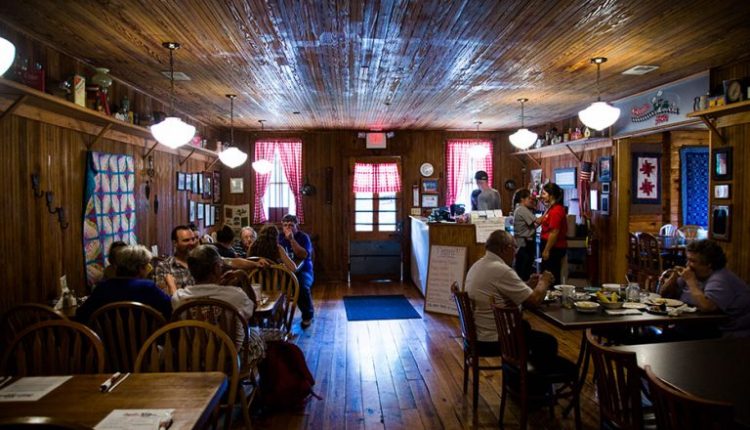 There’s something that happens to us when the city we live in grows as fast as Columbia has. The pace of day-to-day life is quicker, and our time behind the wheel of a car is spent more often at stoplights than on windy roads. As a plus, however, Columbia’s top chefs are eagerly striving to outdo one another to impress us, their hungry patrons. They reach for a sophistication of flavors and ingredients common in large metropolitan areas and we are the lucky recipients of their creativity and culinary risk-taking. We are blessed by talented chefs and restaurateurs in this midwestern college town, of this there is no question.

But good gravy, where is the fried chicken and mashed potatoes? Where are the handmade biscuits? The homemade pies? This is Missouri, isn’t it? A flyover state, yes? One should not have to travel too far outside her zipcode to get a meal that tastes like it’s farm fresh and made by the hands of someone who learned it from their mother and their mother before. Indeed, we are not out of luck and thankfully need not travel more than a mere 20 minutes (or so) to find such a place. It’s just down the highway, in Claysville. And if you’ve never heard of Claysville, that’s understandable, but it most certainly exists. Just don’t bother checking your roadmap, and Siri won’t be of much use either.

The only thing left of the once bustling river town of Claysville (named for Henry Clay, negotiator of the Missouri Compromise, among other notable legislative feats of the 1800s) is this treasure of a restaurant occupying its former general store building. Gone are the days of loaded trains regularly passing through. No more do the riverboats stop, with weary travelers and their pockets full of half penny copper coins, as the river is a bit farther away these days. 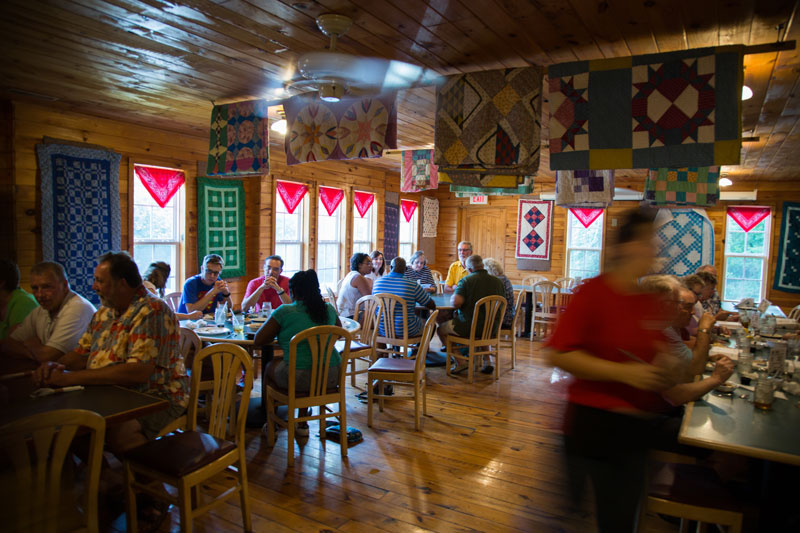 To get the full effect of the store’s surprisingly sweet ice cold lemonade, put your roadmap back in your glovebox, put your phone on “do not disturb,” hop on your bike and pedal down the Katy Trail a stretch. Pull off when you smell the peach cobbler because the Claysville Store is waiting for you and your big city ways.

Once there, owners Mark and Laura Hooibrink and their young waitstaff will be more than pleased to welcome you into their fold of in-the-know patrons. Don’t be surprised when Mark takes a break from the kitchen to make sure you’re enjoying your meal and to find out what brings you all the way to Claysville. (He knows it’s his fried chicken, of course.)  He regularly makes his rounds in the three dining rooms, happy to see familiar faces and excited to make new acquaintances who have just discovered his trailside hideaway. You’ll wonder if you’re the last to know about it as the parking lot is almost always full when the place is open. This is partly because the Claysville Store is open only on weekends, but even so, you get the feeling that Mark is very happy to be cooking for you on his otherwise days off. You see, he is an electri–cian during the week, and his wife, Laura, works for Columbia Public Schools, naturally, for Nutrition Services. If only she could get her blackberry cobbler into the Jefferson Middle School cafeteria, truancy might not be such a problem. And the coleslaw, don’t forget to try the coleslaw.  You’ll want to ask for the recipe but you know it would be in vain as these things must stay in the family. Indeed, this place is unlike any other you’ll find in the city limits of Columbia, which is another reason why you really do need a reservation.

Good food is not all that’s being created in this rickety (but well-loved) old building off the Katy. Good citizens are being served up to the world on a small town’s silver platter. The Hooibrinks are cultivating their own crop of young adults with real-life communication skills and down home integrity by hiring high school juniors and insisting that to work at the Claysville Store, the cell phones have to be put down and the hot plates of fried chicken and all the fixin’s need to be served “NOW” and with a friendly smile and a refill of sweet tea or lemonade if needed.  Twenty years of young servers have passed through the kitchen doors, and Mark and Laura, guided by their faith, insist that a large part of why they do what they do is for the kids of their tight-knit Missouri community. Not once in 20 years has a teenager worked their first shift and failed to return for a second or third. Waiting tables is hard work, but they come back for more and quickly become part of the Claysville Store family. Before long, they’re off to college or perhaps the military, and Mark and Laura are hearing about careers, weddings and children. An extensive family tree grows and grows out of this place that almost wasn’t.

The roughly 150-year-old former general store in a defunct river town along an abandoned railroad was understandably rundown and in disrepair when the Hooibrinks bought it in the late 1980s. One can’t help but wonder why they bought it in the first place. After a few years of ownership, the Hooibrink’s enterprising young children started using it to sell koolaid to thirsty cyclists on the brand new Katy Trail.  (It was in 1990 that the first segment opened along Rocheport.) After the flood of ’93 came along, rather than tear it down, the family fixed it up, made it bigger, added a parking lot, and turned it into a restaurant. They knew college bills were coming soon and smelled opportunity in the dusty old wooden floors. Now those same floors and even the ceiling shine with the warm glow of a Missouri evening as you look over the simple menu.

Is it worth the drive? Absolutely. Order the day’s special (perhaps pork steak or ribs) or let your young server fill your table family-style with mashed potatoes, gravy, apple sauce, coleslaw, biscuits, green beans, country ham and yes, a generous platter of Mark’s fried chicken. And, if you’re lucky, some sweet corn on the cob that a neighbor down the road just harvested. It’s really a shame this place wasn’t open when Lewis and Clark floated by, as they surely would have raved about Laura’s pies in their journals.

Without a doubt the Claysville Store is a special place, but you don’t need a special occasion to make an evening of it. And if it’s a nice day for a long drive on some dusty roads, take the back way along the river via Pierpont, Easley, Wilton and Hartsburg (yes, you might need a map for that route). To make a reservation, call 573-636-8443. To go by car, the address is 5650 E. Claysville Rd., Hartsburg. By bike, mile marker 149.8 of the Katy Trail. And just like the old days, the restaurant accepts cash and check only.

A Gardener’s Work is Never Done