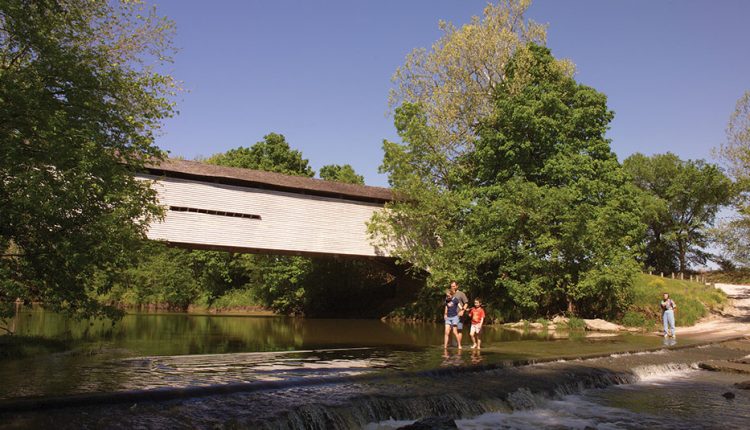 I was running late.

Hannibal was still an hour away. So I took a short cut. My car was making good time on the back roads, slicing down straightaways that squeezed between flat soybean fields, where traffic is sparse. The phone lines drooped and rose in rhythm from one telephone pole to the next. My eyes fell into a familiar trance, counting the yellow dashes along the center line, the dashes that signal it’s okay to pass. But there was no need to pass. My car was flying solo, just below the telephone lines, just above the speed limit. We were alone together on this road.

A simple brown sign changed my course. Oh, I’d seen these signs before, hundreds of them, each pointing to some out-of-the-way attraction that requires too much time.

The detour led to a dead end. I knew it would. At the end of that road stood a covered bridge, all alone, isolated in space and time. Union Covered Bridge has survived almost 150 years. But along the way, civilization beat a different path. Now the span leads nowhere. The bridge retired to the highest rank in the bridge family: destinations.

I pulled into the small gravel parking lot a few steps from the old bridge, and got out of the car to take a closer look.

The stream beneath the covered bridge was just a trickle, and a few yards downstream a concrete ribbon offers the new route, safe passage across the low water. Relieved of its duty, the old bridge seems to relish its new role as a postcard. Union Bridge stands as graceful and elegant as the oaks from which it was sliced. A dozen generations of young lovers have courted through its belly, making dreams, popping proposals. 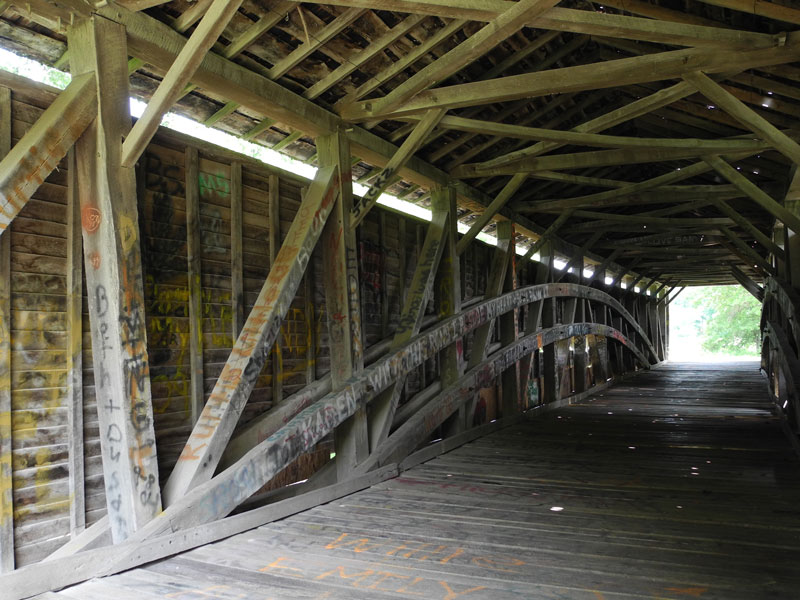 And carving graffiti. Seriously, the inside of the bridge looks like a phone book. Names and numbers. Hearts and arrows and dates. The bridge doesn’t mind, since the carvings are superficial wounds in its skin, long since drained of blood. The structure seems content with its piercings and tattoos. These romantic engravings offer their own rhythm in three-word chapters, brief and to the point, because even a 130-year-old oak yields chips and cuts as grudgingly as granite.

Halfway across the bridge, somebody removed one horizontal board so people could see out. From a distance, this narrow slit makes the span look like a wooden Bridge of Sighs, pulled like taffee to fit onto its banks. Now the old covered bridge is a bookmark in history with only a pair of modern purposes: beauty and picnics.

Oh, and survival. The bridge can’t live without help. She no longer works for a living. She can’t fix herself. She relies on the kindness of strangers who will never visit her. She only survives because the state maintains her as a historic site.

Through that narrow slit in the middle of the bridge I spied a family on a Sunday picnic on the grounds below, nearly within the span’s shadow. I stuck my arm out of the slit and waved. They waved, smiling their approval that the bridge, in its evolutionary journey, had sprouted a waving arm. I thought about joining the family picnic and accepting a fried chicken thigh, and a cold beer from the red cooler or a Coke from the blue one, and sitting at the picnic table while the kids throw a nerf football and the dog chases a frisbee, and learn about their homes and their families and find out if their grandfather carved their grandmother’s name in the bridge. Instead, I retracted my arm from this big wooden shell, and left them to their picnic peace, content in this connection to their past.

After all, I was running late.

From Farm to Finery and Fun