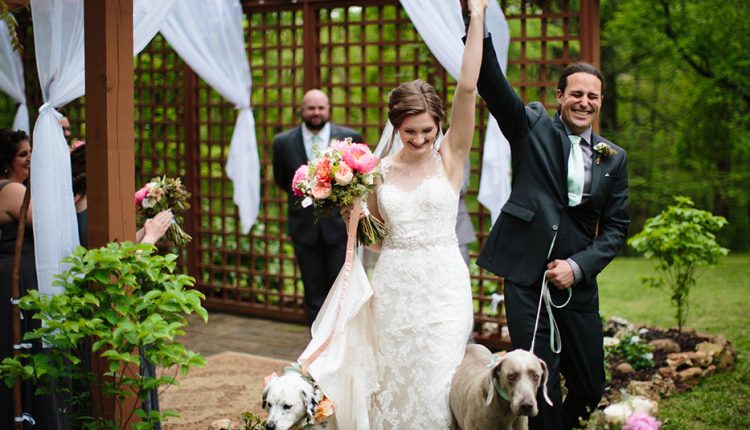 Dorothy Gill and Bradley Johnson were married April 28, 2017, under a pergola at the bride’s beloved family property, The Gillage. Canines participated.
The couple met in 2012 when Dorothy (Dot) found herself the owner of two friendly but rambunctious dogs. She called a local trainer, Brad, who took an interest in the dogs (and their owner). The location of their first date was — you guessed it — the dog park.

The couple became engaged on a camping trip four-and-a-half years later. “The weather was exceptionally warm for October and as the sun was rising through the tent, Brad proposed,” Dot recalled.

“Soft and simple” was the goal for their wedding. They chose a palette based on their mutual favorite color — gray — accented with mint, coral/peach and champagne.

The bride wore an A-line sheath lace gown with an illusion neckline and a lace back with small buttons. The train cascaded behind but a wrist loop and bustle made it walkable. The veil was arm-length and trimmed with lace. She wore a new diamond necklace given to her by Brad’s mother, and pearl earrings borrowed from her mom. Her hair was swept up in a loose chignon and mint-colored shoes provided something blue.

The groom wore a slate-gray suit with a lighter gray shirt, a mint tie and pocket square. His boutonnière was a small rose and succulent combination. His groomsmen wore gray suits with ties, pocket squares and boutonnières that matched the groom’s.

The couple’s dogs, Riley and Bentley, served as flower girl and ring bearer. Riley wore a collar made of flowers and Bentley wore a mint bow tie and a clip to hold the rings.

The pergola held special significance for the wedding couple. Brad helped build it with Dot’s father, Brian Gill, who died in 2016. “Holding the ceremony there was a way to incorporate him into the ceremony,” Dot said. “It helped me feel like he was there with us.”

Family and friends bedecked it with flowers and plants, and the groom’s mother provided finishing touches, sheer white drapes and lights. The pièce de résistance, however, was the couple’s living room rug, brought especially for Riley and Bentley to lie on during the ceremony.

The bride’s family provided the wedding music. Uncles and a cousin on guitar, ukulele, flute and keyboard played and sang music that was dear to the couple’s heart. The wedding party entered as they sang “Somewhere Over the Rainbow,” a song that reminded Dot of her dad. “The music made me tear up,” Dot said. “Luckily, my twin brother told me jokes the entire way down the aisle to distract me.”

Family friend Shane Johnson officiated at the short, spiritual ceremony celebrating “unrelenting love, patience and partnership.” He read “Union,” by Robert Fulghum, which ends: “For after today you shall say to the world — This is my husband. This is my wife.” 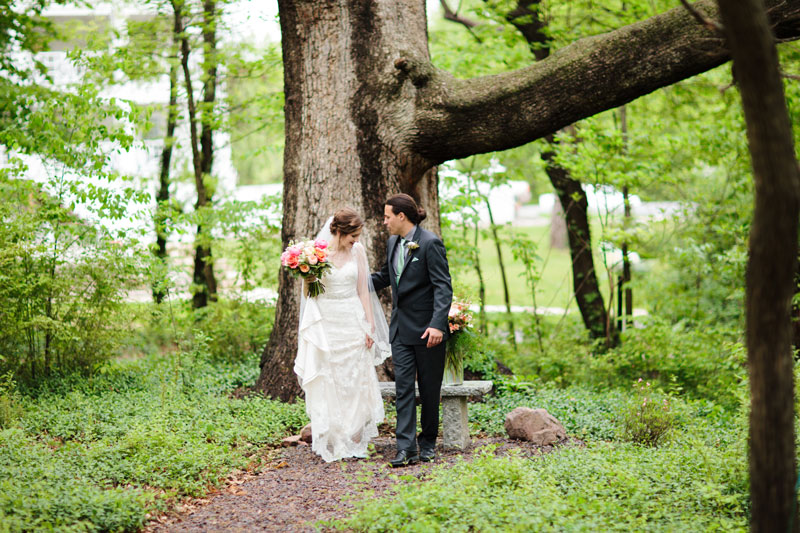 The bride and groom took turns reciting the vows they wrote together, ending simultaneously with “I do.” The couple exited joyously with their (perfectly behaved) dogs to the tune of Elvis’s “Can’t Help Falling in Love with You,” a song that reminded Brad of his late grandmother.

When the bride and groom entered the reception in the Katy Ballroom at The Broadway Hotel, the groomsmen swept them off their feet in a congratulatory bearhug. The room was decorated with ivory table linens and centerpieces similar to the bride’s bouquet, set atop wood slices with floating candle votives.

A heavy hors d’oeuvre buffet greeted guests at the entrance, and a bar, dance floor and DJ occupied the main room. Cupcakes made of pound cake and chocolate cake provided a festive, simple dessert. 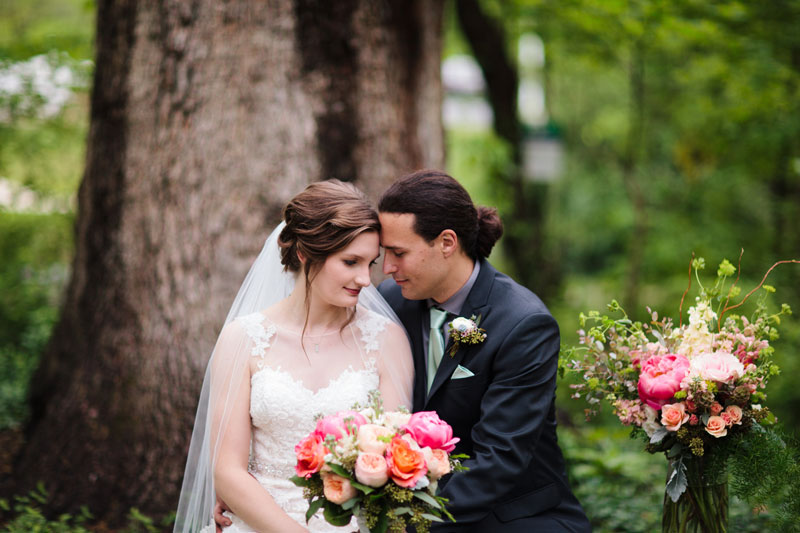 Speeches from their family and friends made a lasting impression on the wedding couple. “My brother made a speech that had everyone crying and laughing simultaneously,” Dot said. “My mother, a writer, wrote a cute little ditty that made everyone smile. Brad’s mother couldn’t make her speech due to tears of joy. The overwhelming presence of family and friends was exactly what we wanted. It was absolutely perfect.”

The couple honeymooned in Kauai, Hawaii, for 10 days, what Dot called a “trip of a lifetime,” before returning to their home in Columbia where Dot is a registered nurse and Brad works in landscaping and carpentry, as well as canine obedience training.

Dot is the daughter of Peg Gill and the late Brian Gill of Columbia. Brad is the son of Scott Johnson of Bexley, Ohio and Lisa Johnson of Berea, Kentucky.