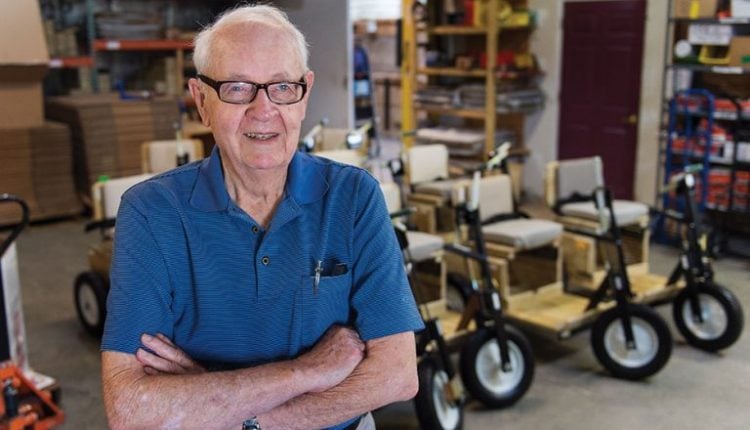 A small workshop in a quiet industrial district in Columbia turns beggars into business entrepreneurs. Take the case of Ernesto, a Guatemalan who contracted polio at the age of 7 and spent most of his life crawling through the streets. Mobility Worldwide provided Ernesto with a PET — a Personal Energy Transportation unit — that allowed him to get off the ground and be mobile for the first time in his life. Ernesto wasted no time in transforming his PET into a mini-mart. Now he has mobility and an income.

Back in Columbia, a smiling face on a large poster greets those who enter the modest workshop of Mobility Worldwide. It belongs to Nguyen van Ut, who stepped on a land mine in Vietnam. It blew off his feet. Trained as a shoe repairman, he crawled on the ground for more than 30 years, struggling to make a living. He received a PET in 2005 and now uses it to pick up and deliver the shoes he has repaired.

“He’s a professional, dignified person,” says Mel West, 93, pointing out the other smiling faces whose stories are told in the entry to the workshop. “I so admire these people who have faced difficulties that would knock me flat. They’ve endured unbelievable hardship and yet they remain hopeful.” 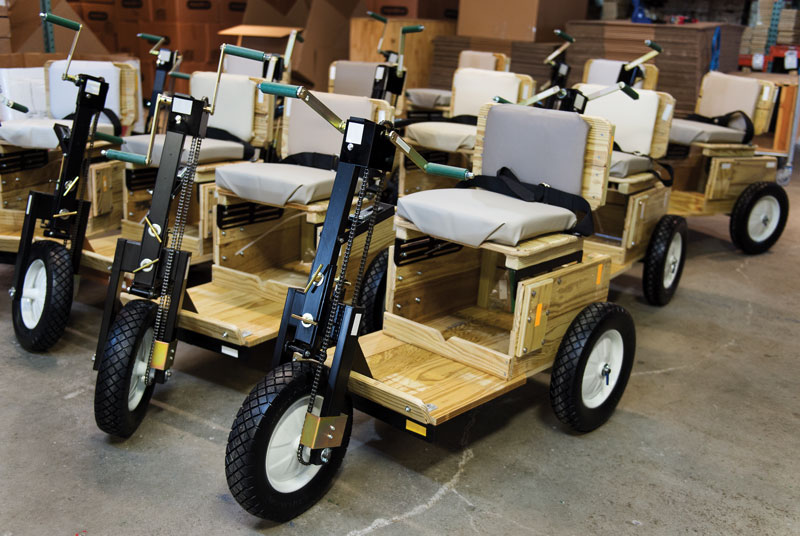 West accepted a challenge from a missionary in 1994 to provide a “hand-cranked, sturdily built, three-wheeled wheelchair rugged enough to traverse dirt roads in undeveloped countries.” West approached a friend and colleague, Earl Miner, an engineer. They tested out four prototypes that met the requirements.

Now West has overseen the production of 77,000 PETs that have been distributed in 104 countries. That’s 77,000 people whose lives have been transformed.

“The three most common responses from people who get these units are, first, pure joy, then the questions, ‘why would someone I never met do this for me?’ and ‘how can I use this to make a living?’” says West.

The Columbia workshop was soon joined by 22 other facilities across the country – all staffed by volunteers – to build and ship the mobility devices to areas of need around the world. West ticks off the list of maladies affecting the clients: “Polio, birth defects, land mines, leprosy. Yes, leprosy is still around. Those are the top four afflictions that cause this devastation.”

On a tour of the immaculately clean workshop, West introduces Pat, a professional carpenter whose job is to assemble PET seats. All the volunteers have keys to the building. They don’t keep regular hours, but they make sure their jobs are completed before their components are needed in the manufacturing process. “My father worked here before me,” said Pat, “and my wife works in the reception area. Mr. West, here, he keeps us all going.”

West, a self-described “ecu-maniac,” founded the Office of Creative Ministries for the United Methodist Church in 1965. OCM later became the Office of Mission, Service and Justice. “I refuse to be part of anything that is not cooperative,” West says.

Mobility Worldwide works with many denominations and non-governmental organizations to serve the world’s poor. Churches, civic groups and individuals contribute to Mobility Worldwide, whether it’s money, materials or time. PETs are constructed with top-quality lumber, tires and new components which have to be purchased. “We don’t treat the poor poorly,” West says. The cost to make each PET is about $250, in contrast to a standard-issue wheelchair, which is about $850. Wheelchairs have specialized parts that can’t be easily replaced in the remote areas where they’re needed; PETs have fewer parts to wear out and most can be replaced with commonly available materials. 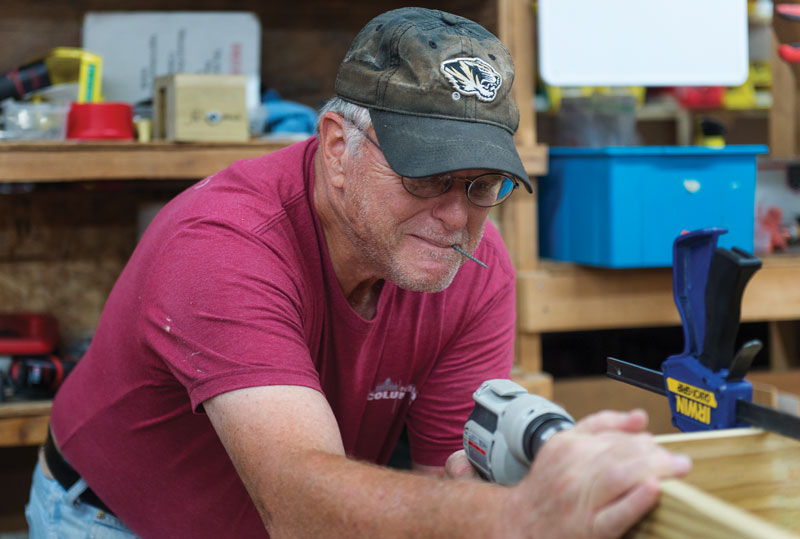 Once manufactured, PETs are packed in sturdy cardboard boxes. Clean plastic milk jugs provide the packing. “We’re great recyclers here,” says West. “The jugs will find new life as cups and containers for the PET recipients. Nothing goes to waste there.” The jugs are donated by several Columbia congregations.
The Container Project shares space with Mobility Worldwide. It collects donations of new or good, used fabric, shoes and clothing that are labeled, packaged and shipped to NGOs for distribution. Donated sewing machines are also repaired and shipped out in boxes packed with fabric, reading glasses, handmade toy cars and tennis balls, the latter two items targeted to the children of moms who will now be able to earn a livelihood with their machines.

“The best way to get people out of poverty is to educate them,” says West. “But so many areas of the world have no resources for it.” He pauses in our tour of the workshop to point out a pallet of disassembled wooden school desks made by a local volunteer who is legally blind. The ingeniously designed desks are sturdy but light and easily assembled into a seat and desktop.

There seems to be no end to the resourcefulness of Mobility Worldwide, its associated programs and Mel West, its founder, who was born during the Dust Bowl in southwest Missouri and learned from his parents that service to others could be more gratifying than any material wealth.

West served in the Marines from 1942 to 1946 and married his wife, Barbara, in 1945. They have two children and two grandchildren. He served as a pastor in Missouri and Texas before starting the Office of Creative Ministries, from which he retired in 1985. Retirement launched him into yet another career.

He studied Spanish in Costa Rica and in 1986 raised $70,000 for Habitat for Humanity by participating in a 1,000-mile walk. He and Barbara took the money to Costa Rica where they started Habitat there. He served on many national and international boards, including Heifer International, Habitat International, the National Board of Global Ministries and the Rainbow Network, among others. Now the couple reside at Lenoir but West works several days a week at Mobility Worldwide.

One of his favorite tasks is reading letters from grateful PET recipients to the volunteers. “It’s the only compensation they get,” says West. “I look up and see tears in their eyes and I know it’s enough.”