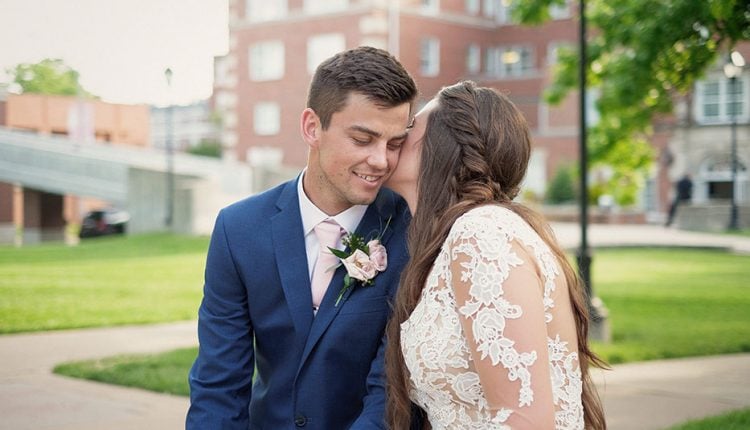 Couple braids cords to symbolize their lives with God

The couple met in 2015 in Colorado at an Ultimate Training Camp where they both worked as interns. They became friends on the second day of camp. Kayla said they pretty much spent every free moment together. “We had our first date when Cam came to visit me in Columbia a month after camp.”

On a rainy day in September the following year, the couple became engaged under the arch by the MU Journalism School. “He proposed where we had walked around after our first official date and many nights after,” said Kayla. 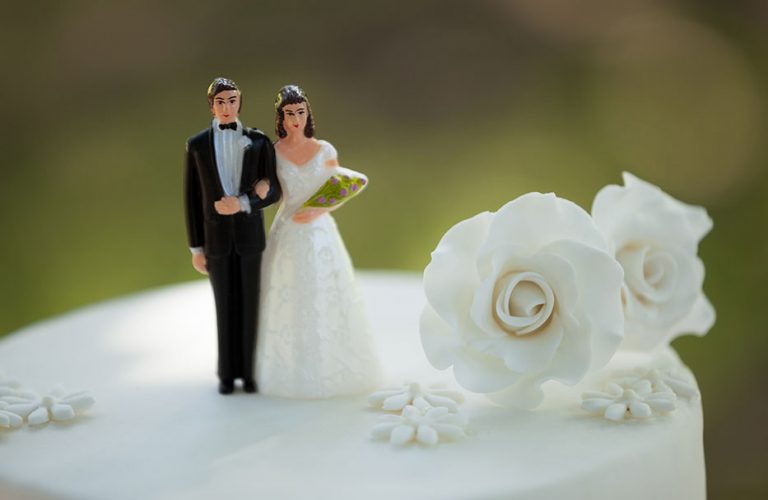 Colors for the wedding were chosen to complement the groom’s navy blue suit—his sole request for dress or décor. Kayla chose neutral colors to let the blue suit stand out. She wore an A-line floor length gown with an illusion plunging neckline, long lace sleeves and buttons down the back. A simple fingertip-length veil and pearl necklace and earrings accented the dress. Her hair was curled and swept up on one side, with some strands twisted and pinned to the back. She carried a bouquet of blush roses against pink statice and eucalyptus.

Bridesmaids wore chiffon dresses in neutral colors from David’s Bridal. “I had one pregnant bridesmaid and one in 7th grade, so I wanted everyone to choose something they were comfortable in,” Kayla said. Bridesmaids carried bouquets of blush baby roses, baby’s breath and greenery.

The chapel was decorated with tulle fabric at the end of each row with burlap-wrapped baby’s breath tied in the center. Flowers cascaded down the stairs to the altar and a large centerpiece of flowers was placed behind the bride and groom on the podium.

Jeff Prior officiated over the Christian service, where the bride and groom exchanged traditional vows. They read letters to each other aloud so their friends and families from two states could better understand their values, motivations and mutual attraction.

They braided three cords together to symbolize their two lives intertwined with God, based on the verse from Ecclesiastes: “Two are better than one, because they have a good reward for their toil. For if they fall, one will lift up his fellow. But woe to him who is alone when he falls and has not another to lift him up! Again, if two lie together, they keep warm, but how can one keep warm alone?  And though a man might prevail against one who is alone, two will withstand him—a threefold cord is not quickly broken.”

The reception was held in Kimball ballroom on the Stephens campus. The couple wanted the décor to be “romantic whimsical.”

“We used a lot of twine, burlap, mason jars, wooden centerpieces and candles,” Kayla said. “All of the details were soft and mostly blush-colored. We had homemade wooden signs and lots of gold details that brought the blush and wood together. I loved how all the colors looked together, especially the flowers. My bouquet was more beautiful than I could have imagined.”

White linens covered the tables. Centerpieces consisted of circular wood slabs topped by flowers in a wine bottle or mason jar, and candles.

A three-tiered cake decorated with white frosting and flowers that matched the bride’s bouquet served the guests. A sign in wooden script on top of the cake declared “Mr. and Mrs. Michael.”

The new “Mr. and Mrs.” had a special moment alone before the pictures were taken, precious time Kayla says she would not trade for the world.

The couple honeymooned in Cabo San Lucas, Mexico, for a week before returning to Columbia where Kayla is a full time graduate student studying counseling psychology and Cam works for a campus sports ministry, Athletes in Action.

The bride is the daughter of Dave and Jenn McDowell of Mason, Ohio. The groom is the son of Maggie and Vic Rembao, and Chris and Sabine Michael, all of Loveland, Colorado.