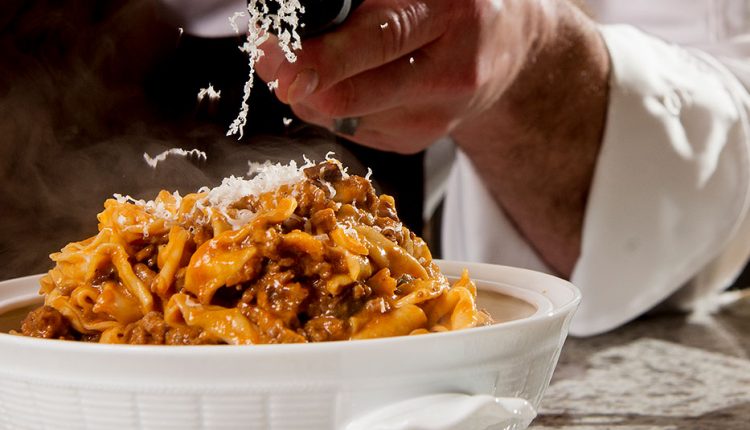 Hearty meat sauce to add to your repertoire

You have probably had Pasta Bolognese, a simple sauce on pasta. But do you really know what goes in it? It can be as complicated or as simple as you want. The recipe below is middle-of-the-road and has some options to take or leave. It is a hearty meat sauce with some tomato — not a tomato sauce with some meat. It is not for the faint of heart or appetite. It takes a little bit of time to make, but most of that time the sauce can be unattended while you make your fresh pasta, clean the house or visit with friends.

Soffritto
Similar to the French Mirepoix, soffritto (sofrito in Spanish) is a mixture of onions, carrots and celery that finds its way into so many dishes. Soffritto is a mince of the three aromatic vegetables that starts as the base for many Italian recipes. Mincing is traditional, but a diced or grated will also work. Each cut will just slightly change the ending texture, though the vegetables mostly cook until they are one with the meat. Some recipes call for the vegetables to be cooked separately from the meat, but I like to start with the soffritto and add on with other aromatics and the meats. This allows it to be a one-pot sauce and cuts down on the dirty dishes. Medium to low heat is key with the soffritto. To cook the soffritto I like to use a mixture of butter and olive oil, plus some of the rendered fat from the pancetta. You just want the soffritto sweated, not browned, if the pans start to get a little too hot or you see a slight bit of color starting to form, toss in a bit of water to cool the pan down then re-adjust your heat.

Meat
Meat is the base for the sauce. This is a hearty sauce that sticks to your bones in the cold of winter. A common ratio is equal parts of beef, veal and pork. The dish is named after the city of Bologna, Italy, known for its meats and cheeses. Just about any combination of meats can be used, but most have at least the combination of beef and pork, pulling flavors from each for the sauce. I like to start the sauce with a little pancetta or bacon, the fat helps with sweating the soffritto but also so bulks up the sauce.

Aromatics
I have onions, carrots, celery, garlic in the recipe, but that is just the base. You can add and take away just about any other aromatics that you like. Some are more traditional than others, but as long as you like it, you’re golden. Bay leaves, thyme, rosemary, garlic, shallots … whatever herbs you have lying around.

Liquid
A sauce like this needs a lot of liquid to be able to cook for such a long time, but you don’t want much left over at the end of the cooking process. Stock (or water) and wine help the sauce stay moist while slowly cooking to meld flavors and brown everything into a homogenous dark amber color. A long period of time on a burner on low heat or in the oven would lead to a scorched sauce without the moisture to help prolong the cooking process. The cream at the end helps to richen the sauce as well as emulsify some of the excess fat into the sauce (some of the excess fat can be removed just before adding the cream). 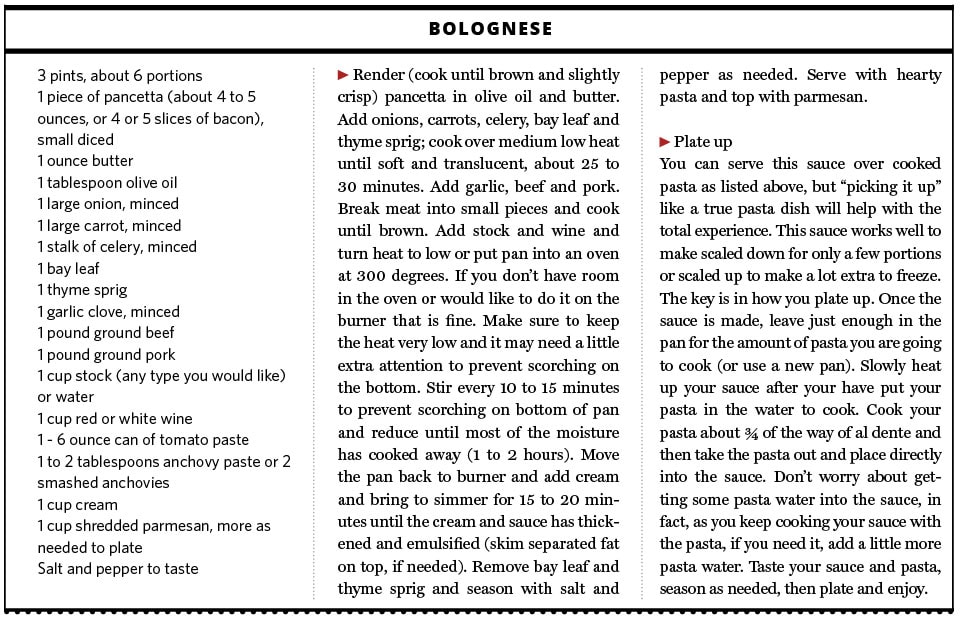 The Bam is Back