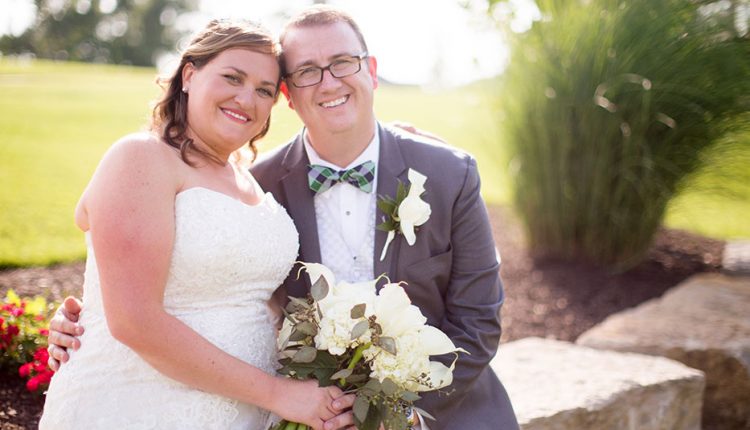 The couple met through mutual friends in Columbia. On spring break, 2016, they became engaged on Dauphin Island, Alabama.

The couple wanted a very formal wedding and reception so they chose the classic colors of black, white and silver. Then they threw in some spring green to liven things up.

The bride wore a fitted designer gown with a sweetheart neckline, hand beading and flared skirt from David’s Bridal. Her hair was arranged “princess style” (swept up on one side) with a pearl tiara. Diamond earrings accentuated the simplicity of her look. She carried a bouquet of large Cala lilies, white roses, white hydrangeas and green Cala lily leaves from Kent’s Floral Gallery.

Her attendants wore soft silver floor length gowns from David’s Bridal. They wore pearl earrings and a necklace that were gifts from the bride. They carried single Cala lilies from Kent’s Floral Gallery.

The groom and his attendants wore black Vera Wang tuxedos from Men’s Wearhouse over white patterned vests. Spring green and silver plaid bow ties, mailed to them by the groom as their invitation to participate in the wedding, accentuated their formal attire. Their boutonnières were single Cala lilies.

The bride and groom exchanged vows in a traditional double ring ceremony led by Rev. Charity Goodwin, minister of United Methodist Church, with a scripture reading by Joe Henderson, Jr., brother of the bride. The couple and their four children said a prayer of unity during the ceremony in which they prayed they would grow together as a family, with love at the center.

Wedding guests proceeded to The Club at Old Hawthorne for hors d’oeuvres while the wedding party was photographed at the church, Tiger Plaza and the Old Hawthorne golf course, where they could be seen zipping to a variety of locations in golf carts, ending up behind the family home which overlooks the 14th hole.

Mary Beth Darr, wedding coordinator for The Club at Old Hawthorne, decorated the reception in a wine theme to recognize the couple’s affinity for wine tastings and dinners hosted by the Wine Society of the country club. She used the couple’s saved wine bottles and corks as centerpieces. The top of an old drafting table became the registry “book.” The groom’s brother, Kyle, carved “McCarthy” into the wood and guests signed their names around it. It will be repurposed into a coffee table to commemorate their special day.

Classic white linens topped the tables. A chocolate and French vanilla four-tiered cake featured different designs on each white iced tier. The groom’s cake was piped with black and gold trim on half for the couple’s alma mater, MU, and blue and gold on the other half to recognize Pi Kappa Phi, Andrew’s fraternity, of which he was the founding president. A tiger head and the fraternity’s Greek symbols also festooned the cake.

The wedding party was seated at a long table for 20 people in the formal dining area. Dancing took place on a patio strung with white lights overlooking the lake and an obligingly beautiful sunset.

Rachel is the daughter of Joe and Linda Henderson of Columbia. Andrew is the son of Dennis and Diana McCarthy, also of Columbia.