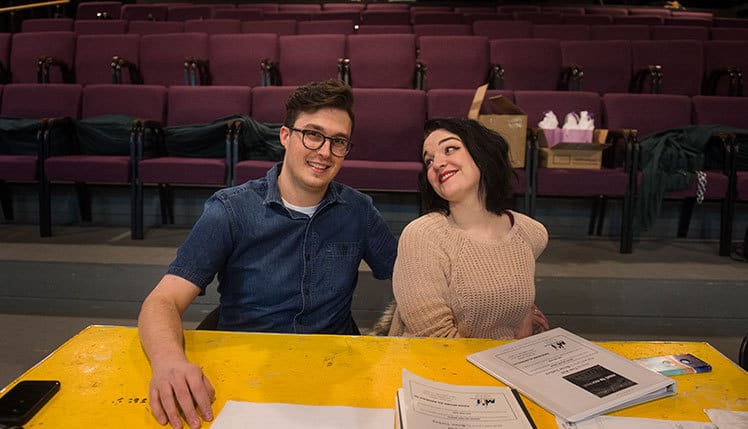 The Shoults tackle a Tony Award winner together

Grief, mental health and psychiatry hardly seem like good themes for a rock musical. Despite this, in 2008, “Next to Normal” made its off-Broadway debut to critical acclaim, capturing numerous awards for its original musical score and going on to win the 2010 Pulitzer Prize for drama. Praised for presenting darker subject matter compared to other musicals, “Next to Normal” has developed a following of theater-goers. Nearly a decade later, this revolutionary musical is making its way to Columbia Entertainment Company this month.

“Next to Normal” focuses on a seemingly simple suburban family. Early in the play, Diana, the family’s mother, is diagnosed with bipolar disorder and psychosis stemming from grief she suffered earlier in her life. Her husband, Dan, who also suffers from depression, attempts to help her cope and hold their family together while their daughter Natalie tries to live a normal school life.

As Diana’s condition intensifies, the family seeks out help from a psychiatrist, Dr. Madden, who treats Diana’s illness with changing medications, some of which create new problems due to side effects. The family struggles to adapt to the new normal as they reflect on their own problems and mental health, wondering how they move forward together.

“It made more sense to us to come at this in the way we’ve come at other projects,” Derek says. “It wasn’t going to be that one of us is director and one of us is assistant director. The way we work best together is on that same level, being able to make those decisions together.”

Derek and Katie have been together 10 years. They first met when they lived on the same floor of the now-demolished Stafford dorm at the University of Missouri. As their relationship grew, they began to learn of their shared interests.

“It’s funny,” Katie says. “We both love theater, but I don’t think we really realized that until we found this show. [“Next to Normal”] was the first one that we watched, and we said, ‘Wow! You like theater and I love theater, we should pursue this.’”

Setting out to direct “Next to Normal” together, the Shoultses first focused their energy on putting together a great cast capable of delving into the depths of the characters. The cast is small, only six actors and one understudy, which allows for more attention to be paid to everyone. Both Katie and Derek attribute the smooth rehearsal process to the cast’s willingness to explore the mental health aspects of the show and take risks in their performances.

“What we’ve been the luckiest with is the fact that our entire cast is very passionate about this show,” Katie says. “So, they’ve been willing to roll with the punches just as we’re giving them to them.”

Outside of the actors’ performances, the lynchpin of “Next to Normal” is the music. Derek and Katie chose to start with music rehearsals to give the actors a solid foundation to put their acting and blocking on top of. Early in their planning process, both directors agreed the music would be the star of the show and, should they come to any decisions through the rehearsal process that seemed insurmountable, they would keep this ideal in mind to point them in the right direction.

Working together as a married couple might seem overwhelming, but Katie and Derek haven’t been shaken by the process. Both are creative-minded people and find that working with one another has been easier than working independently because they’ve had the support of someone who knows them well.

“Yes, this is a challenge and it’s difficult, and it’s this big, creative endeavor, but we’re doing it together,” Derek says with a genuine smile.

The two admit there have been some disagreements during the rehearsal process, but they’ve yet to come across any true surprises from one another. Utilizing one another’s strengths and weaknesses has allowed them to plan and work more efficiently. While Katie keeps the schedules and calendars in order, Derek can tackle blocking rehearsals. One thing they both adamantly agree on? Katie is the bad cop.