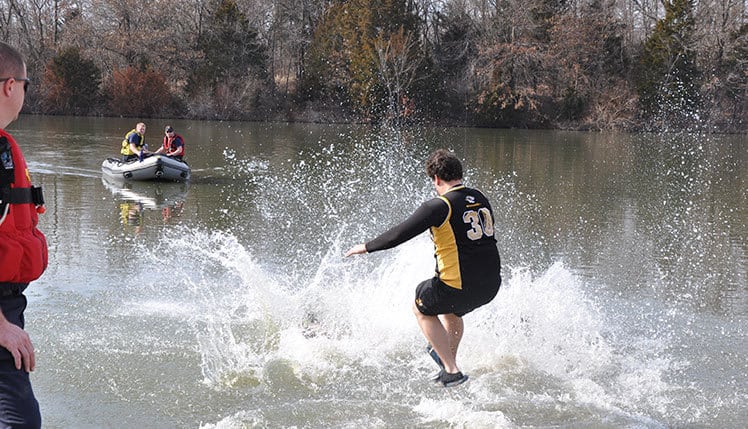 Polar plungers brave chilly waters for a good cause.

On Saturday, March 3, at noon, scores of intrepid souls will take part in the Columbia Polar Plunge in support of
Missouri Special Olympics. The plunge is the organization’s signature event, and there are 14 happening in the state. Funds raised at the Columbia plunge will benefit athletes in the central Missouri area, which serves 31 counties, including Boone. Eighty-five percent of every dollar raised will be returned to program services.

Plunge participants, most dressed in creative costumes, will walk, run or crawl into the frigid winter waters of Bass Pro Shops’ lake. Chris Carson, of sponsor radio station Y107, says, “I’ve worked so many plunges during my years in radio. What gets me every time is the excitement, no matter the weather, cold conditions. I love the team comradery, teams in costumes to support their athlete.”

Participants must be at least 10 years old, and have raised a minimum of $75 each by the day of the plunge to take part. Columbia’s oldest plunger is a repeat participant who’s 79, Lutz says. One team is made up of Columbia Special Olympic athletes themselves.

Special Olympics has been promoting acceptance and inclusion of people with intellectual disabilities through year-round sports for 40 years. It has nearly 4 million athletes in 70 countries, with 2,396 in mid-Missouri and 587 here in Columbia. They compete in 21 Olympic-style sports, from basketball to power lifting. A state-of-the art training facility is being built in Jefferson City, which will be up and running by the end of the year. But the organization also enriches its athletes’ lives in areas beyond sports by offering training in leadership skills such as public speaking. This training is very beneficial to the athletes — 50 percent hold jobs in their communities worldwide.

This marks the 11th year the plunge has been held in Columbia, and the fourth it’s been held at Bass Pro. It was previously held at Stephens Lake.

Last year’s event drew 225 participants who raised $40,000. This year’s goal is 400 participants and $70,000. A variety of businesses and organizations participate, Lutz says, and among them are Isle of Capri; Mizzou student organizations;
Columbia College; high schools such as Hickman, Jefferson City, Boonville,

If you haven’t yet sponsored a plunger or team, you can do so on-site the day of the plunge. Cash, checks and credit cards will be accepted. Learn more or donate online by visiting www.somo.org.