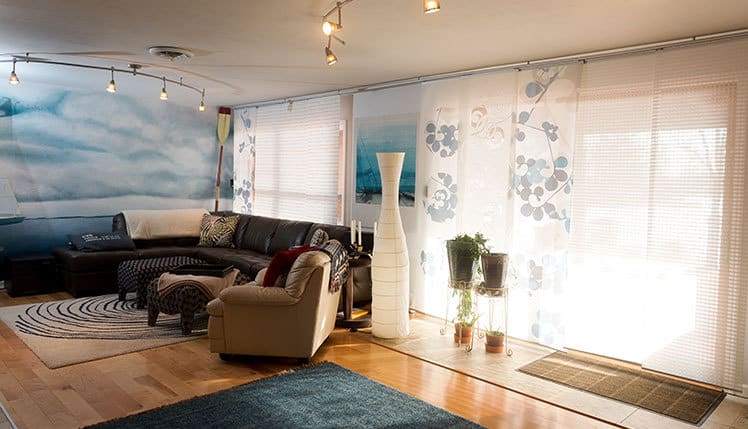 From the street, Mark and Lotta Timberlake’s home has the feel of the other homes on Hulen Lake. Built in the ‘60s, it’s a walkout ranch with five bedrooms and three baths — bigger on the inside than it looks on the outside. They scored it 12 years ago when the previous owner let slip to a neighbor she was thinking about selling.

“We came down and knocked on the door,” Lotta says. The owner was a tough negotiator. “She said, ‘Yeah, I was thinking about selling, but I need to get enough I can live off the interest.”

Homes in this neighborhood sell like this, she says, before the Realtor sign goes up in the yard.

“It was well-built, but it was a little dated,” Lotta says. “The whole first floor was covered in white, beautiful carpet, but underneath the carpet was the hardwood floor: unfinished hardwood floor.”

The Timberlakes hired architect Kip Vannaman to help them renovate the house into a lakefront home they would be comfortable in. The bulk of the renovation took a year, and as remodels go, this one had its share of surprises. Typical of this era of home, there were several small rooms and not a lot of light. Through the process, they became accustomed to taking the challenges and turning them into features.

“Our thought was to open everything up and knock it down,” Lotta says.

But some things were immovable.

“When we tore down the walls, we found this big old chimney,” Lotta says. “We knew there was a chimney … but not this big.”
Because they couldn’t move the chimney, they improved upon it and installed a see-through fireplace faced with slate to make it a focal point in the upstairs living area.

The kitchen, however, did move from its small, standard, L-shaped corner in the front of the house to occupying the full length of the home, front to back.

Born and raised in Sweden, Lotta looked to her homeland for kitchen design inspiration, more specifically to one of its international retailers: Ikea. She likes the functionality and the ease of entertaining the kitchen provides. The sleek design of the cabinetry and thoughtful organizational features also give the space a clean canvas that plays well with the Timberlake’s art collection.

Much of their art is personal. From the “butt” statue to a Joel Sager painting to the Kosta Boda crystal sculptures, Lotta says, “It doesn’t have to be fancy and expensive; it just has to have some kind of meaning.”

By necessity, industrial influence also finds a place in the Timberlake home. When they raised the ceiling to the roofline, it created an opportunity for Mark to apply his expertise as an engineer.

“We design duct work, so we did that exposed, and then the lights,” Mark says. “We kind of like the exposed stuff.”

“It makes sense too, though, because where do you put the duct work when you take everything out?” Lotta says. “There isn’t any more ceiling to put it in.”

“You either try to hide it, or if you can’t hide it,” Mark says, “you just make it a feature.”

Rolling with what the home revealed to them, the Timberlakes created a space that blends his Columbia roots and her Swedish ties — open and airy where aesthetics meet function.