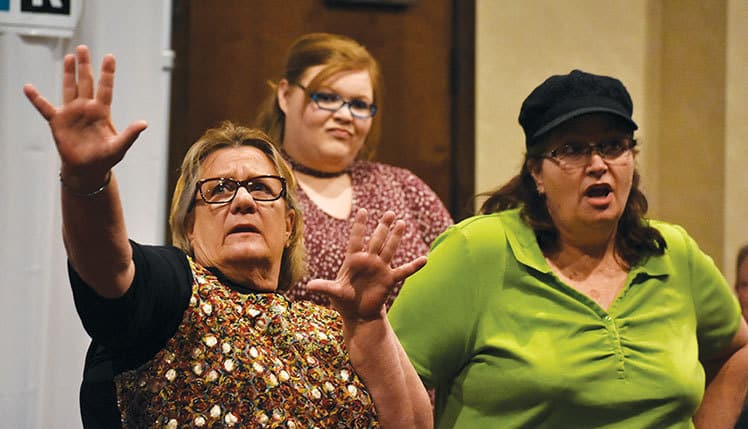 Live theater is exhilarating. From the dramatic story lines to the intensity of the emotions displayed, there’s something to be said about the excitement of watching people perform. Adding to the thrill is the idea that anything could happen at any time, and the actors onstage will have to react and adapt to keep the show going.

Improvisational theater captures that concept of quick reactions and never knowing what comes next to create a one-of-a-kind experience. Actors are charged with creating a scene, many times based on audience suggestions, without having learned any lines or created any script.

One of the most well-known improv groups performed on the TV show “Whose Line is It Anyway?” On that show, the actors were performing in a game show comprised of improvisational activities that required a quick wit, a strong sense of humor and slapstick physicality. The show launched in 1998, and gained popularity over its eight-season run in the United States. It developed a cult following of fans that spurred a revival in 2013. The increased interest in this style of theater also led to an increased awareness of improvisational groups in larger cities such as New York and Chicago.

Last year, Tim Thomas decided that it was time to add Columbia to that list. Having been a member of an improv troupe, Thomas was drawn to the quick action and creative wit required to put on a great show. Plus, with no overhead costs, no lines to memorize and the ultimate goal of making people laugh, Thomas thought creating an improv group would be a great avenue for new actors to get involved in the theater community. Beginning with six actors last June, Thomas created and currently directs the improve group Off the Cuff, and envisioned the group performing in a similar vein to the famous television show. To prepare, the group practiced popular games to develop their talents for creating interesting and hilarious scenarios for an audience to enjoy.

“As any normal director,” Thomas says, “I got to find out the strengths and weaknesses of the actors. Where their skill sets are, what their tendencies are and who tends to work better with other actors. My goal as a director is to put them into a situation where they will look their best.”

Thomas’s direction and coaching allowed the actors to grow more comfortable in their abilities. Despite the varied experience level of the actors, the group came together through practice to develop a tight bond. With newfound trust in their talents, they expanded and added new members, increasing their total number to 13. After a few months of rehearsals, Off the Cuff made its debut performance in December at a fundraiser for Talking Horse Productions.

The group performed around 20 games in the hour-and-a-half show, with each game requiring at least three actors, and some larger scenes requiring as many as seven or eight. Many of the favorites from the television show made cut, such as “Scenes from a Hat,” a game where the actors have to perform a short one- or two-line play based on a suggestion that an audience member has written and placed into a hat on stage. Additionally, Off the Cuff took on the challenge of audience favorites such as the musical “Irish Drinking Song,” where each actor sings a line of a song and then passes it on to the next actor to complete. The show also added new games to its repertoire including one where two actors in a scene of three could only speak in lines from an audience member’s cell phone text messages. Throughout the show, the audience was rolling with laughter and the strong attendance proved that Columbia’s interest for improv was taking off.

For those who haven’t experienced an improv show before, Thomas makes a bold promise. “You’re going to laugh; you’re going to know that we’re completely making up what you’re going to see and you get to participate in what you see.”

Off the Cuff looks to add one weekend of shows each month to provide more opportunities for people to discover improv theater on their own.