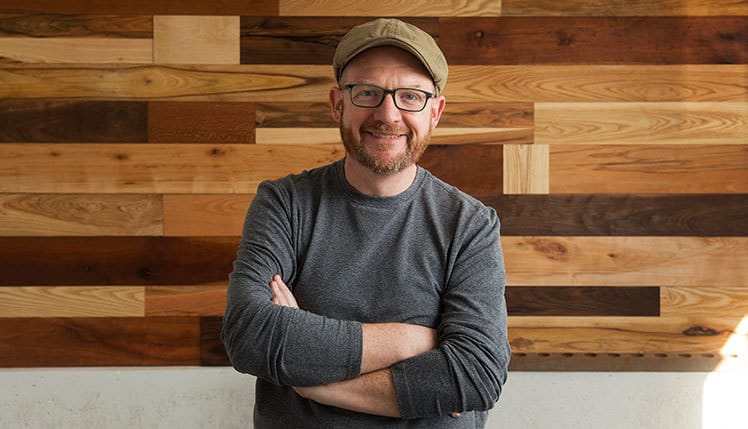 Joe Marshall talks about his craft the way others talk about a lover: filled with an intensity and passion so rich that only a person familiar with the intimate details could recount.

Before his handcrafted tables and other hallmark wooden creations appeared in the likes of West Elm, an internationally known modern furniture and home décor retailer, he was honing his craft in workshops kitted out in old-school, 1920s Stanley hand tools in County Laois, Ireland.

Growing up in a family with generations of carpenters, it was only a matter of time before Marshall began his journey in fine woodworking. His uncles and family before them ran a woodworking company, completing large projects in government buildings and cathedrals for many years. Inspired by their work, Marshall developed his technical skills in an old-style workshop, learning to properly make joints and other facets of woodworking — without a single power tool in sight. 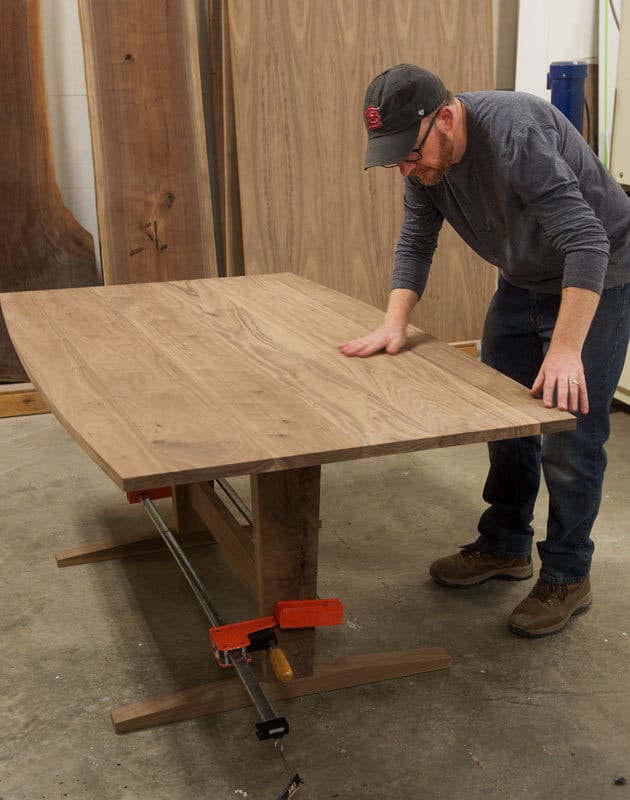 Outside of the workshop, Marshall completed formal education to work as a sound engineer, but then he met a woman who brought him from Ireland to the United States. Julie, a long-time Columbia resident and now his wife, was in medical school and needed to return stateside to complete her education. Marshall followed her, opting to forego his career as a sound engineer to pursue something with a less rigorous lifestyle.

Upon arrival in Columbia, Marshall continued his education in the evenings at Columbia College, while Julie finished her program at the University of Missouri School of Medicine. The couple then moved to North Carolina where, in 2007, they welcomed twin boys Jacob and Evan. It was then that Marshall realized the need to be home with his family, so he became a stay-at-home dad until Julie was offered an opportunity to return to Columbia in 2008.

Marshall stayed home with his boys for two years before looking for work outside the home, but navigating the job market as a parent is hard enough with one child, let alone two. He soon discovered that the best option for his family would be for him to start his own business. 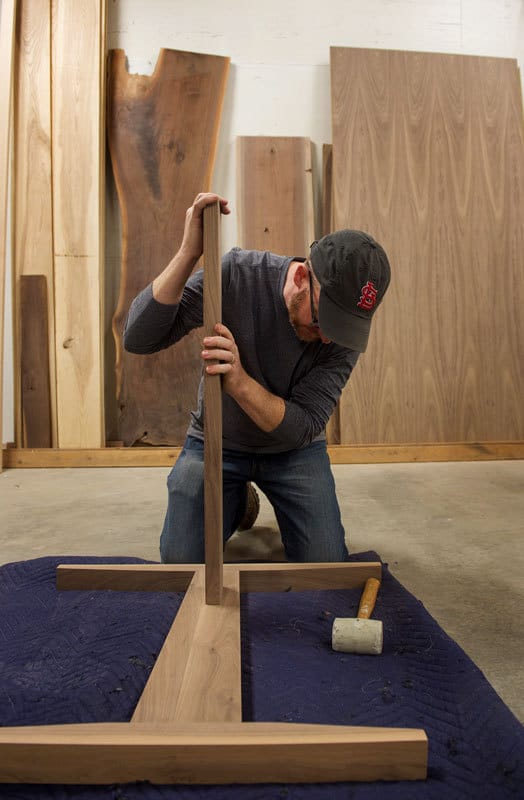 “One day we were at a market in Miami and there was a guy making cutting boards, and Julie looked at me and said, ‘You could do that,’” Marshall says. “But I didn’t just want to make cutting boards, so I decide to develop my own system of carving bowls.”
Soon after, Marshall set up shop along a wall in his garage and began hand-carving bowls. The bowls he produced were different than the typical round bowl turned on a lathe. After making five or six bowls, he dug deeper into the characteristics of a good wooden bowl — the proportions, the thickness of the walls and golden ratios to create the perfect bowl.

“I wanted to create something that when you picked it up you had a very well-crafted, tactile experience,” Marshall says. “Something that felt very different than a dough bowl you might find at an antique mall — something that had an art to it.”
After finishing a few bowls, he presented the completed product to the staff at Bluestem Missouri Crafts, hoping to receive advice on where he could sell his art. What he gained was his first customer. For the next four years, Marshall dedicated his time to crafting gorgeous, hand-carved wooden bowls for sale at Bluestem, online in his Etsy store and at Art in the Park, a local art festival. He made hundreds of bowls and sold them all. It was at his second Art in the Park that he found a beautiful slab of cherry wood that he planned to cut up and use for his next round of bowls.

“I just couldn’t do it,” Marshall says with a laugh. “I couldn’t cut it up and lose the beautiful grain, the gorgeous cherry color. It just seemed like a shame to cut it up into pieces.”

In an effort to save the natural beauty of the wood, he decided to pursue another route. He found a set of metal legs and then sanded and smoothed the cherry, finished it with the same iconic bowl finish his customers had grown to love, and took his first table to Art in the Park. The table sold almost immediately, and in that instant Marshall’s entire business plan was upended.
In 2012, he and his wife welcomed their third son, Connor. As was the case after the birth of his first two children, Marshall took time off work to care for his infant son. In the weeks and months following the birth, Marshall returned to the small workspace he rented, only to be confronted with the realization that he didn’t have the heart for the work he was used to anymore. 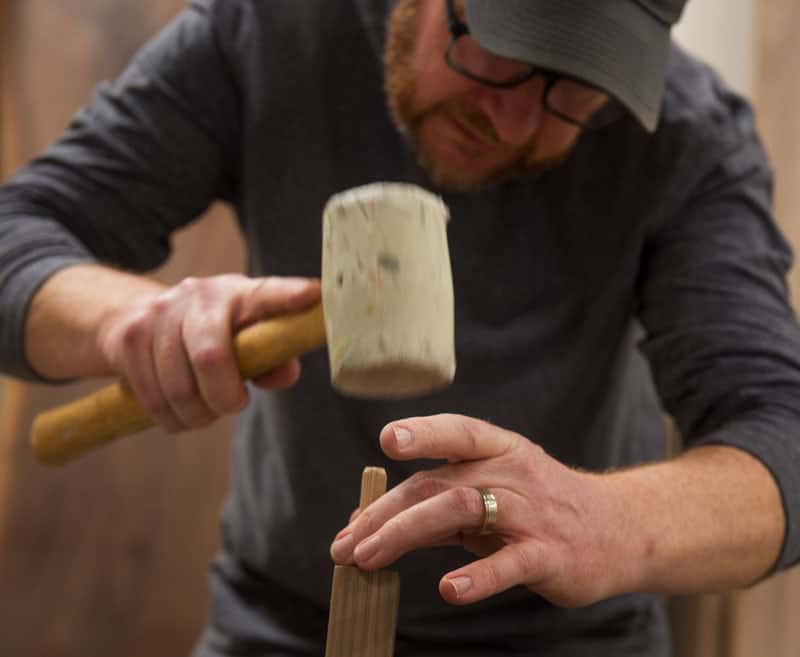 “I couldn’t bring myself to make a bowl,” he says. “I had made so many of them at that point, there was no reward anymore.”
But the thought of the table he had made and instantly sold kept coming to his mind. Friend and fellow creator Andy Werth suggested Marshall take up residency in his workshop and start making furniture instead. The first coffee table he designed sold before it was even finished. Then the commissions came rolling in, building and growing his customer base quicker and wider than he ever anticipated and requiring him to move into a shop of his own to keep up with the workload.

For Stacey Lang, it was that word-of-mouth recognition that drew her to Joe Marshall Woodworking. She teamed up with Marshall to create and install the 81-inch-long, solid walnut, farmhouse kitchen table of her dreams.

“Everything he makes is just beautiful,” Lang says. “What he does with wood is unlike anything I’ve ever seen. He just has such a passion for what he does, it’s hard to ignore. I know that everything he makes for me is unique and is something that will last.”
Since the completion of her kitchen table, Lang has worked with Marshall to design and create a number of custom pieces for her home. She plans to commission Marshall to create retail shelving and other commercial pieces for the salon she runs.

“Beautiful wood needs to be presented as simply as possible,” Marshall says. “And by achieving the simplest possible design, you’ve allowed nature to present its beauty at its fullest. And that’s what I want to do.”