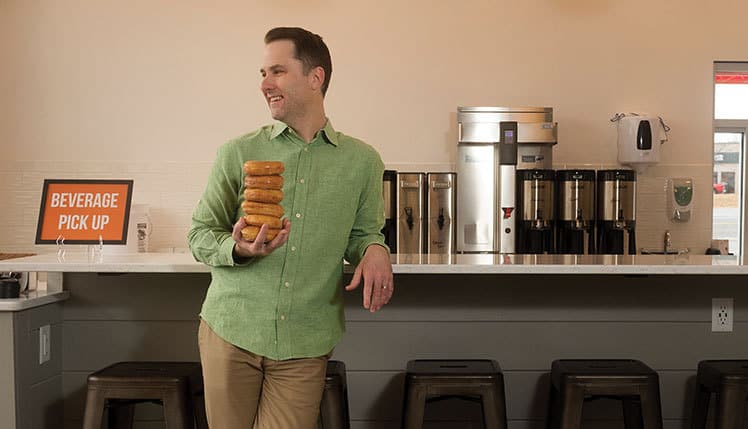 This January, three years after Michael Urban opened Harold’s Doughnuts on 9th Street, he opened his second location at 204 E. Nifong, in south Columbia. Donut shops may all look much the same – mouthwatering donuts on display, an assortment of tables, chairs, a counter with bar stools – but behind the fresh donuts on display at Urban’s two shops is a sophisticated business operation run by an entrepreneur who has become a vital part of Columbia’s crafted food scene.

At 9 a.m. on a cold, winter day, his new shop looks like a textbook example of a successful retail food business. Busy, energetic, inviting. A woman in her 20s is walking out the door, briskly heading to her car, a white bag of doughnuts in her hand. A line of cars stretches from the side drive-through window around the back and to the opposite side. Inside, the tables are filled with people, chatting, enjoying doughnuts and drinks. The work crew is hustling, filling the drive-through orders and waiting on customers at the counter. Everyone who walks in is greeted with a sincere and friendly welcome. There is nothing canned or phony in the greeting or the setting. The air is scented with one of the most pleasant aromas known to humans – the sweet smell of donuts riding on an undercurrent of fresh coffee. 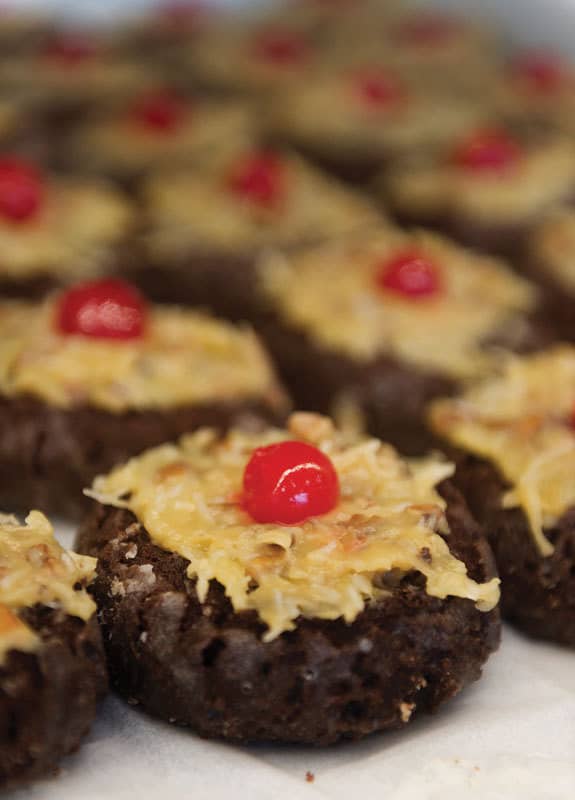 Doughnuts weren’t always important to Urban. “This is an unlikely business for me,” he says. “I had zero experience in the restaurant industry other than part-time dishwashing in high school. But here we are. We had the vision for this. We studied this.”

The “we” refers to Michael and Karli, his wife, who is also a practicing physician. Together they founded the company, and Karli continues helping out when needed on her days off. Considering that his two locations now employ 41 people and serve hundreds of retail and wholesale customers each day, Urban is a bit surprised by the way his business and life are turning out. “Never, in a million years, did I think I’d be where I am today,” he says.

But it’s not too surprising. Urban’s approach to business is creative and methodical. He has the sort of background and personality that makes for a successful entrepreneur. At age 34, he’s thoughtful, planful and articulate. He knows what he’s doing and having a good time doing it. Not only is he steeped in business experience, but he has a clear vision of what he wants Harold’s Doughnuts to be to his customers.

“I want people to like coming to Harold’s, to want the experience to be part of their lives. Yes, we sell made-from-scratch doughnuts, and, yes, we take our craft very seriously. But I tell my staff frequently that we sell happiness. The donuts are the channel by which we do that. We’re in the business of making people smile and making their day just a bit better. That’s what inspires us,” he says.

And it’s hard not to smile when eating one of his custom donuts. Some are gluten free, some are filled with creams, others are topped with peanut butter, chocolate and nuts. A fanatic could, if he or she felt like it, try a different donut every day for two weeks before starting through the menu again. At least once a month the downtown store features a doughnut bar, where customers can make their own creations. 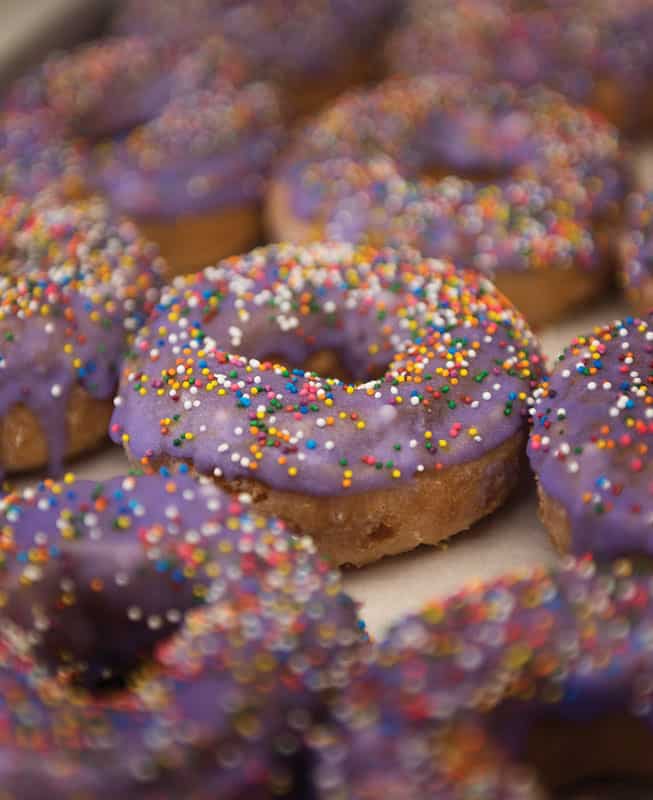 Entrepreneurship comes naturally to Urban. His grandfather Harold – the doughnut-loving namesake of the business – operated a Western Auto store in New Haven, Missouri. Although Urban didn’t set out to own his own business, he had seen firsthand the independence and rewarding life that business ownership can bring. But before opening his first donut shop, Urban’s focus was on politics. He graduated from the University of Missouri – Columbia in 2005 with a degree in political science – not exactly the academic background of a typical doughnut retailer. Then, he was hired by John Hancock and Associates, a political consulting firm in St. Louis, where he advised clients on running political campaigns. “I had an unbelievable experience, learning everything from how you raise money to how to interpret polling results, to messaging and doing grassroots work – all of which is applicable to opening a business,” he says.

After three years of political experience, Urban returned to Columbia, using his research skills at Pure Media. As he recalls it, one evening, he and Karli were relaxing, making doughnuts, using his grandmother’s recipe. Something clicked and the idea of making a business out of doughnuts struck the couple as something that could be satisfying.

Several years and two doughnut shops later, Urban is immersed in his business. Typically, his day starts at 5 a.m., while his two girls, Elise and Nora, are still sleeping. “I check email messages to see what may have transpired last night with our baking team and if there are any issues I need to be aware of to start the day” he says. Around 6:30 a.m., he and Karli are making sure the girls have a good breakfast. Then it’s time to get Elise, age 6, ready for school and Nora, a toddler, ready for daycare. When everyone’s where they are supposed to be – including Karli, who practices at MU Health – it’s time to go to one of the doughnut shops. Michael’s workday is anything but routine. It may involve employee meetings, marketing, checking whether sales are on track or making sure customers are getting the service and product the business is striving for.

“Like any entrepreneur, you’re always running, feeling you’re a bit behind. It’s a vocation that’s all-consuming and you have to be pretty disciplined so that it won’t get to the point where it runs you over,” he says.

Urban realizes that he’s not in business alone. Along with the support of his wife, he appreciates the support of other Columbia business owners. He names Sparky’s, Café Berlin, Broadway Diner and Fretboard Coffee as just some of the businesses that helped introduce Harold’s Doughnuts to the community. “In the food retail business, Columbia is way above average as a business town,” he says. “There are a lot of smart, interesting people here who are willing to help.”

Ukatsu: More Than Fun And Videogames