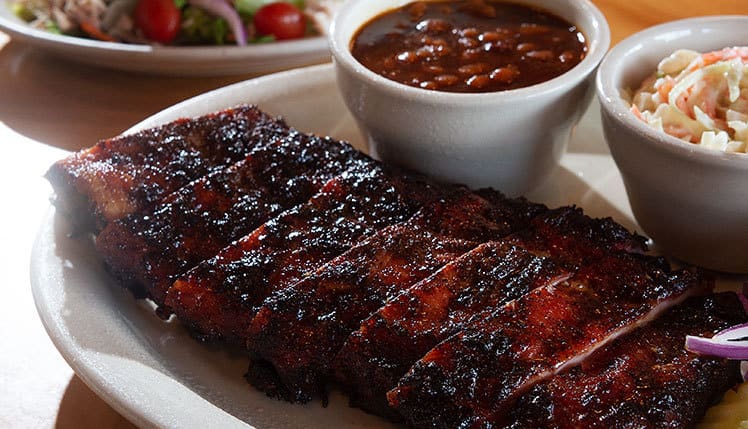 Twenty seems to be Mark Brown’s lucky number: 20 years on the road touring with famous rock stars like AC/DC and Fleetwood Mac, and now 20 years of success in owning Buckingham Smokehouse Bar-B-Q in Columbia.

The founding of Buckingham is an unusual story. Brown lived on the road, setting up stages and driving tour buses for famous bands from 1976 to 1996, and most of the time his wife, Vicky, was with him. After 12 years of marriage, they found out Vicky was pregnant.

“I knew that everything was going to change right then – we both did,” Brown says.

A few years later they also had a daughter, and not long after their daughter’s birth, Vicky was diagnosed with cancer. “That was it. At that point it was like, ‘Mark, you can’t think about it anymore. You have to get off the road. You have to make a living doing something else besides working for rock stars,’” Brown says. 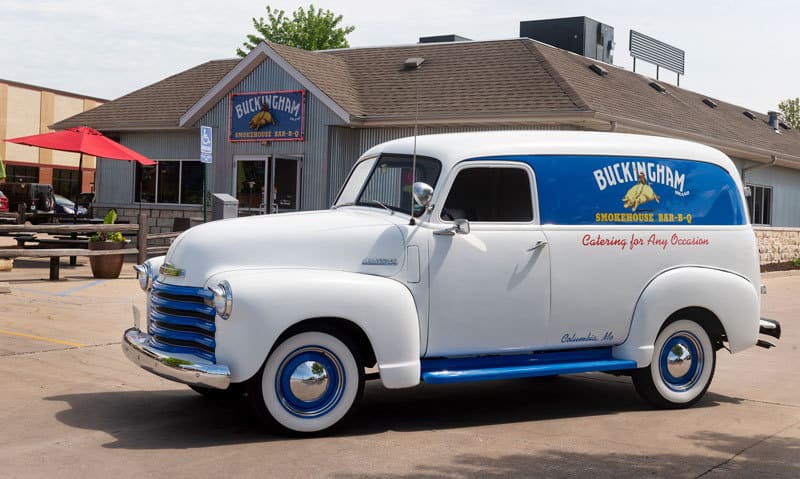 He knew he didn’t want to earn $10 per hour punching a time clock, so he decided starting a restaurant was his best bet, and he knew it was going to be a smokehouse from the very beginning.

At first, Brown opened Buckingham in Springfield in 1996 with two business partners. After two years, Brown dissolved the partnership and opened up Buckingham in Columbia on the corner of Business Loop and Providence in 1998. Buckingham’s first location was dubbed “the corner of death,” because no business had survived for more than two years there, but the curse was no match for Brown’s barbecue. After 10 years of success on Business Loop, the lease ran out and Brown decided to stick with the south location that he opened in 2006.

March marked 20 years in Columbia. “Buckingham has been much more successful than I ever dreamed,”
Brown says.

IC: Why name it Buckingham?

MB: The name actually came from Lindsey Buckingham of Fleetwood Mac. On his solo tours, which I did, the shirts the merchandise people sold at his shows had the big bucking pig on it. Buckingham. Lindsey Buckingham. That’s where the logo came from, and Lindsey gave me permission to use the logo for the restaurant because he thought it was actually a great idea. It came from a rock star.

IC: Are there any secrets to Buckingham’s recipes?

MB: We make our own dry rub that we put on the meats, and then for the ribs we do a combination of things. One thing that goes on the ribs is brown sugar. I mean there’s no real secret, just quality meats and dry rubs. We have the horseradish coleslaw — I call that my Barry White coleslaw because I was working for Barry White when I got the recipe, and people really like it a lot. There’s not a lot of secrets to it, we have always gone with the best quality. We don’t put sauce on anything because we think that’s up to the customer. 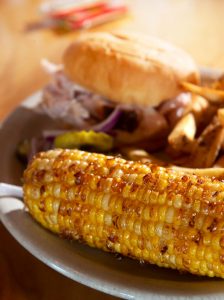 IC: What is the key to your longevity?

MB: You’ve got to stay consistent, you’ve got to keep serving people and be open every day. We close on the holidays, but most of the year we are open seven days a week. I’ve got guys in the back that have been working for me for 18 years now, which in the restaurant business is very unusual, and that helps with consistency. In the front of house there’s always turnover, and it used to be easy to find help, but nowadays you can’t find anybody anymore. Everyone in town has ‘now hiring’ signs. It is a struggle to keep a restaurant staffed anymore. Molly West has been with me a long time, and I don’t know what I would do without her. She manages the front of house and makes the schedule. I’m so lucky I’ve had guys in the back of house forever, for the quality of your restaurant that really helps a lot.

Both my boys work here, Kevin grew up in Buckingham and Jason, my other son, has worked here for 16 to 17 years now. My sons will take over Buckingham one day, and hopefully soon. I’m trying in little steps to phase myself out and let them take over. It’s hard though. I am Buckingham.

IC: What is your favorite item?

MB: We’ve got really good ribs. What I eat a lot of times is a pit salad — a salad with meat on top. It’s so easy, and after you have owned a restaurant for 20 years, you can’t go into any other restaurant in town without people asking, ‘What are you doing here?’ You can’t eat barbecue every day. Nobody could do that. I still enjoy my food, every couple of weeks I’ll take some ribs home, and I think, ‘Oh man these are good.’ Our smoked chicken is also so good and I take that home a lot.

IC: What should a newcomer order?

MB: A lot of people order the sandwich special, and that’s a sandwich topped with whatever meat you want and two sides. That’s for lunch. If you’re coming in in the evening, it’s hard to go wrong with ribs and smoked sweet potatoes.