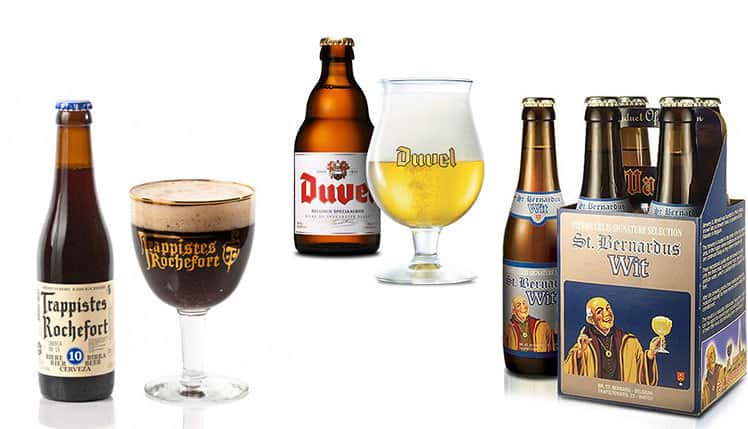 Sip and savor these complex yet accessible brews.

American craft beer has been the focus of my career for just under a decade, and I plan on keeping it that way for some time. That being said, if I get one last beer before I die, it’s going to be something from Belgium.

Have you had Duvel, before? I mean a real Duvel, out of a bottle. The bottled version is heavily conditioned (meaning there is a bit of extra yeast added to the bottle), which adds more alcohol to the beer and ramps up the CO2 considerably. There’s so much CO2 created with the conditioning process, you’ll want to pour the beer into a large tulip or wine glass and allow at least half the glass to fill with foam. If you don’t allow that foam to be released out of the beer, you’ll ingest all that gas and, well, that’s not always enjoyable.

Once a bit of the foam settles, you’ll find a beer that is beautiful in its simplicity. At its core, a Duvel is basically a product with the standard malt and hops you’d find in a pilsner-style beer, but with a proprietary yeast and fermentation process that creates wonderful, but subtle notes of apple, white pepper and an almost fluffy carbonation that keeps everything nice and “round” on your tongue. Don’t let the color and clarity of the beer fool you; you are in for 8.5 percent alcohol by volume in every bottle.

At beer bars all over the country right now, someone is asking for a Blue Moon, or something that “tastes like Blue Moon.” Just like Oreos, Kleenex and other successful brands, Blue Moon doesn’t have a monopoly on the product. The standard Blue Moon we all know is simply that brand’s take on a Belgian witbier (or white beer). The best out of Belgium, in my opinion, is the St. Bernardus Witbier. The beer is sharp, remarkably refreshing, and there are just enough notes of citrus and coriander to make the beer fun enough to remind us that we are drinking something with some thought behind it. If you really want to add an orange to the beer, go for it. But when we are talking about some of the classic
Belgian beauties, putting fruit in your beer is like putting A1 sauce on a great, dry-aged ribeye. In this case, the beer is made with a touch of orange peel already, just as much as the brewer thought would be appropriate. No more. No less.

Finally, we are onto the beer that completely reframed my brain in terms of what I knew beer could be. The pinnacle of Belgian brewing, in my opinion, would be the great Trappistes Rochefort 10. This guy is 11 percent-plus alcohol by volume, but no worries, as this beer is made to be a sipper. There is no end to the complexity found in every bottle, to the point where you think the monks (yes, monks produce this beer) are adding adjuncts (nontraditional beer ingredients) to the final product. You’ll taste bits of chocolate, loads of dark fruit like figs and red grapes, a touch of banana and a hint of black licorice as well. All the while, the beer is always full and certainly “heavy” on the palette. With every sip you’ll think there is more than just beer in the glass, but that’s just it — it’s just beer. All those wonderful flavors, all those bits and pieces that make this beer a big, full beauty, are simply flavors coaxed out during the mostly traditional brewing process. This is the first beer where I really noticed how the liquid in the bottle could be used to show off the thought, care and overall passion possessed by the folks creating it.

Last word on these products: These are all pretty pricey brews. That’s fine, as they are beers to be sipped and savored, not put down in massive quantities at a tailgate. All should be poured into a glass (as should most beer, to be honest). Drinking them out of the bottle makes it impossible to enjoy the aroma these babies produce, and that would be an utter shame