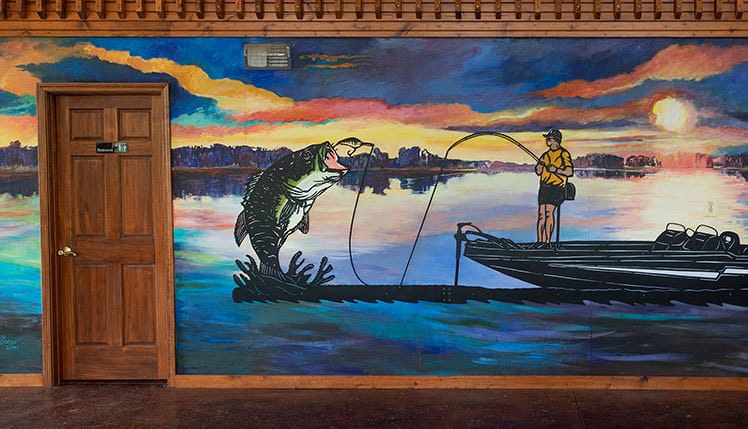 All the amenities make this man shed a standout.

Scott Pauley’s “detached garage” is enviable. It is more than 2,800 square feet of lodge comfort and working space, filled with all the amenities to make work, hobby and family life easier.

Pauley designed the shed on a piece of yellow paper.

“I knew what I wanted and what I wanted to be able to do,” he says. “I wanted to be able to get everything inside. When I travel, I pull the fifth-wheel travel trailer, then I pull the boat behind it. I’m a train going down the road. The whole purpose [of the lodge] is to get everything inside where you can work and get all of your equipment ready, and everything’s ready to go. Then all you’ve got to do is hit the road.”

In 2011, Pauley began work on the S&S Lodge — that is the official name of his and his wife, Sara Parker Pauley’s, outbuilding. Aside from framing work, these avid outdoorspeople constructed the outbuilding mostly by themselves with some help from family.

The stained, sealed concrete floor was the work of a cousin, who is in the concrete business, but the walls and roof were outsourced. Pauley approached Columbia barn builder Harold Cunningham to build the structure. Even though Cunningham’s wait list was long, Pauley was willing to wait. After Pauley described what he wanted — a “stick-built” structure — Cunningham suggested his brother-in-law, a house framer, take on the job. They had it up in three days, but the entire construction process took a solid year.

For the interior walls, Pauley used carsiding instead of the metal shell of the outer wall. Older railroad boxcars were made of the same material; it’s basically tongue and groove. He says there is a coat of stain and two coats of varnish on every board and he should know “ ’cuz I did most all of them.” He worked through the week staining and sealing with a goal of 50 12-foot boards, then on weekends, he and his brother would hang them until they ran out. He did get some help from Sara’s mom and his dad, but even so this process alone took the better part of the winter.

It was worth it though, as Pauley sees it. Sheet rock would have required more maintenance, and his thought was, “If I do this right, I’ll do it one time, and won’t ever have to do it again.”

The wood walls also help the acoustics of the space. When groups of any size gather for a meeting or a get-together, the wood dampens the sound and allows for better conversation. Plus, it gives the space a lodge feel.

“We wanted to have a real warm feel that when you came here it felt like you were comfortable,” Pauley says.

The walls are adorned in true lodge fashion with an extremely personal touch. One section is devoted to turkey tail mounts from several hunts. Pauley confesses most are Sara’s. Another trophy section tells the story of more failure than success, he says.

Of that fishing trophy collection, Pauley points out, “to a lot of people that tells about a lot of success, but to me it’s a lot more about failure because there’s about 500 more times that I’ve failed than been successful. Winning a tournament is not easy.” 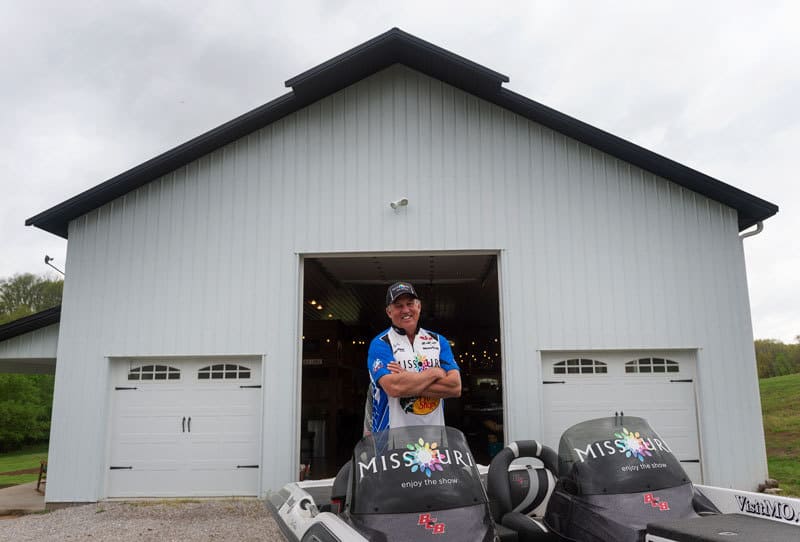 A retired Missouri State Highway Patrol officer, Pauley spent 33 years on the force, the last nine assigned to the FBI joint-terrorism taskforce. Today he still serves Missouri, but he says he doesn’t really have an official title. He is an outdoor ambassador for the Missouri Division of Tourism and promotes Missouri as an outdoor destination.

“It’s not really a job. I don’t consider it a job,” Pauley says. “How hard is it to go around and tell people about how cool Missouri is? What fun things there are to do? That’s not a job. I’ve worked a job.” 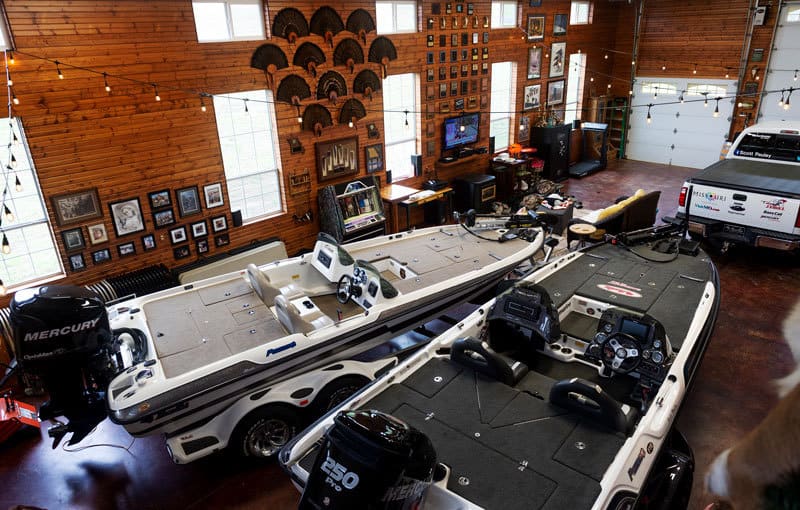 His man shed, as he calls it, makes it easy for him to execute his duties. It’s equipped with full electric and plumbing, and a full bath, which makes it easier to clean up when he gets home from outdoor trips. Clothes and linens never make it into the house as there’s a washer and dryer to take care of those, too.

“This is a working garage,” Pauley says. “It gets used every day, on purpose.”